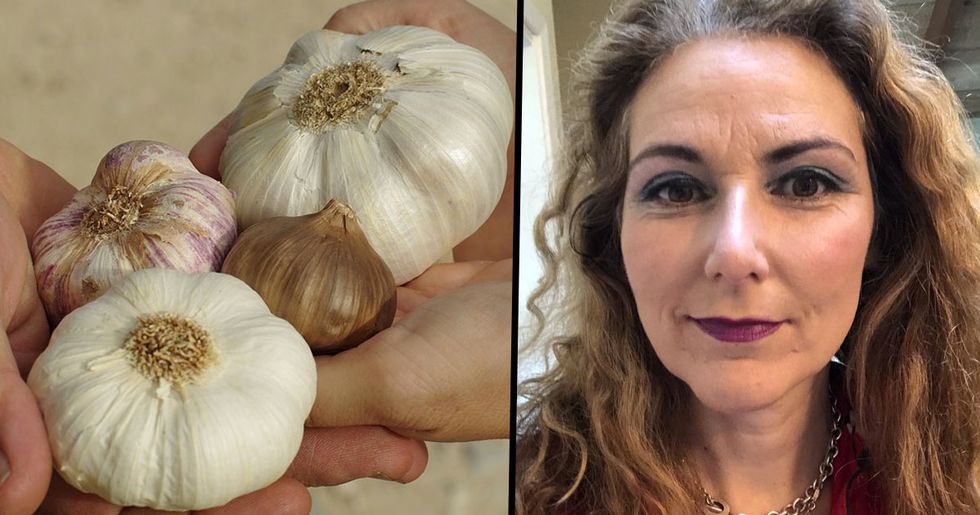 Doctor Warns Women Not to Put Garlic in Their Vagina

Natural and "ancient" remedies for various health issues may seem like cheaper and altogether better alternatives to synthetic drugs. But don't believe everything you read online.

Some women, after doing their research on Google, have started using garlic cloves to treat yeast infections. Spoiler alert - it doesn't work.

Gynecologist, Dr. Jennifer Gunter, has recently debunked the myth. Even though scientists have found antifungal properties in garlic, no benefits for yeast infections have been found in humans or even in mice.

In fact, putting garlic up there can have fatal complications.

Keep reading to find out why, scientifically, using garlic to treat yeast infections is a very, very bad idea.

In addition to garlic, Dr. Gunter also warns about other popular natural alternatives that women use for "vaginal maintenance" and better sex lives.  She identifies six red flags to look out for when doing your own research. Keep reading to find out what they are!

But not everything that you find on the internet is actually helpful. Some of the "natural" remedies that you can find on there can cause serious harm.

Especially when it concerns your private areas.

Yeast infections can be treated with drugs, but some women opt for more natural alternatives. Such as garlic.

But, boy, are they taking a risk.

Gynecologist, Dr. Jennifer Gunter, is warning women on Twitter that they should never put garlic anywhere close to their vaginas.

Some say that putting a clove of garlic in there for three days should do the trick.

But Dr. Gunter says that, together, this "treatment" and the vagina create the perfect environment for botulism to develop.

Why you should not put garlic in your vagina. A thread. Garlic contains allicin, in THE LAB it MAY have antifungal… https://t.co/yW6B4Ljbcj
— Jennifer Gunter (@Jennifer Gunter)1555996284.0

"This means they don't understand for allicin to be released the garlic has to be cut or crushed. Sigh."

According to The Sun, botulism is a very serious complication that in worst cases leave people paralyzed or even dead.

It's true that scientists have found garlic to have antifungal properties, but it's never been tested on humans - not even mice.

The antifungal properties are actually found in allicin, which garlic releases only when it's crushed or gutted. But who would ever dare to put crushed garlic to such delicate skin? Plus, even washed, garlic can contain soil bacteria...

"Bacteria from the soil can be pathogenic - bad for the body. That's why we clean wounds," Dr. Gunter said.

"If you actually happen to have an inflamed yeasty vagina that soil bacteria would be more likely to infect."

"So for garlic to work, you would have to crush it and stuff it up somehow. There is still the dirt thing."

"And the cut up garlic on raw tissues thing (OUCH). And the fishing of the garlic out by the gyno thing."

She added, "Garlic can cause biofilms on braces, so could garlic contribute to biofilms in the vagina? Biologically plausible."

If you have no idea what biofilms are (neither did we), Dr. Gunter explains, "Biofilms are bad. You do not want them to form especially when you have yeast."

The "effect of garlic good bacteria [is] also unknown."

But what about all the "evidence" from women who say they have successfully treated their yeast infections with garlic?

"As 50-70% of women who self treat for vaginal yeast never actually had a yeast infection you can't say much," Dr. Gunter said.

"Except half of them never had yeast to begin with so the irritation they had may have been a temporary thing and resolving wasn't garlic related."

It, most likely, was the placebo effect.

"And the placebo effect is strong," Dr. Gunter continued. "If you think vaginal garlic is going to make you feel better, you may very well feel better temporarily."

"My advice, do not take medical advice from anyone recommending vaginal garlic for yeast or anything else."

To further prove her point, she later added, "You know why you refrigerate homemade garlic vinaigrette? So any clostridium bacteria lying around on the garlic doesn’t produce botulinum toxin."

"Right. The vagina is an anaerobic environment, so perfect for clostridium. You’re welcome."

Dr. Gunter has a book that will be available in August called The Vagina Bible. It will be filled with a lot of other insights like this one!

And as a gynecologist, Dr. Gunter has heard of plenty. She says that most women that she’s treated used "natural" remedies for a variety of reasons: in attempt to improve their sex lives, for "vaginal maintenance" (whatever that is) and even for contraception!

"There are two themes at play that seem simultaneously opposing yet complementary," she writes.

These are "that natural is best and that the vagina is so dirty, fragile or in need of nourishment (or all three) that it is one wrong pair of underwear or wet bathing suit away from complete catastrophe."

Dr. Gunter says that people tell her there’s plenty of evidence to prove that these remedies work, however, all of them can be easily dismissed with a "cursory knowledge of reproductive physiology." So she does exactly that.

"Lemon juice is recommended to acidify the vagina (it cannot)."

"Yogurt is suggested because its bacteria could help repopulate the healthy, vaginal bacteria (commercial yogurts don’t have the right strains)."

Here, Dr. Gunter says that, in fact, "testing has revealed they have bacteria and debris and they could introduce far more oxygen — a bad thing — into the vagina than a tampon or menstrual cup."

"These 'newly discovered ancient therapies' are neither ancient nor effective," she continues.

"Instead they are the result of celebrity wellness sites, social media and even some doctors recycling material from health almanacs and digests that used to be found at the grocery store and repackaging their content under the guise of female empowerment."

She doesn't deny that such remedies were possibly once used in ancient times as a form of medicine.

"But who cares if something was used historically if it has since been deemed ineffective or harmful?"

"Bloodletting for fever, mercury for vitality or syphilis, and animal dung as a spermicide."

"[These] are all ancient medicinal practices, but that doesn’t mean we’re revisiting those therapies today."

So why, then, are women still drawn to similar ancient remedies?

Dr. Gunter believes it's because women still see vaginal health as a taboo topic. "So many women are still uncomfortable speaking openly about genital health," she says, "and the internet offers privacy — not to mention community and validation."

"When all these needs are met, accuracy can seem secondary."

But you should always, always consult a medical professional for an accurate diagnosis and correct treatment plan.

"But there is so much crossover with symptoms that when women attempt self-diagnosis they are likely to misdiagnose more than fifty percent of the time."

"That’s worse than flipping a coin."

Researching your symptoms is definitely a good idea, but make sure you consult your logic too.

Here are some red flags that Dr. Gunter suggests to be aware of when you do your research.

Look out for articles that say that something has been "proven," it's not always as it seems... Often, when articles write that some treatment has medical evidence behind it, it means there are very few studies that have actually found any benefits. Be wary if "something is being sold" - if the website is selling something, there's a 99%  chance that their information is biased.

"The recommendation is homeopathic products." Dr. Gunter says that research shows that doctors who recommend such products are more likely to practice poor medicine.

"Advice relies on testimonials." What works for one person might not work for another. Individual experiences are not science - they're biased. And don't follow advice if  "it involves inserting food vaginally for health reasons." Dr. Gunter simply calls that "nonsense."

Finally, if "they recommend vaginal cleaning of any kind," such as "vaginal steaming," stay away.

"It’s well-meaning but woefully misinformed," Dr. Gunter says. "If your bottom is sore, use a sitz bath." Stay healthy, ladies!