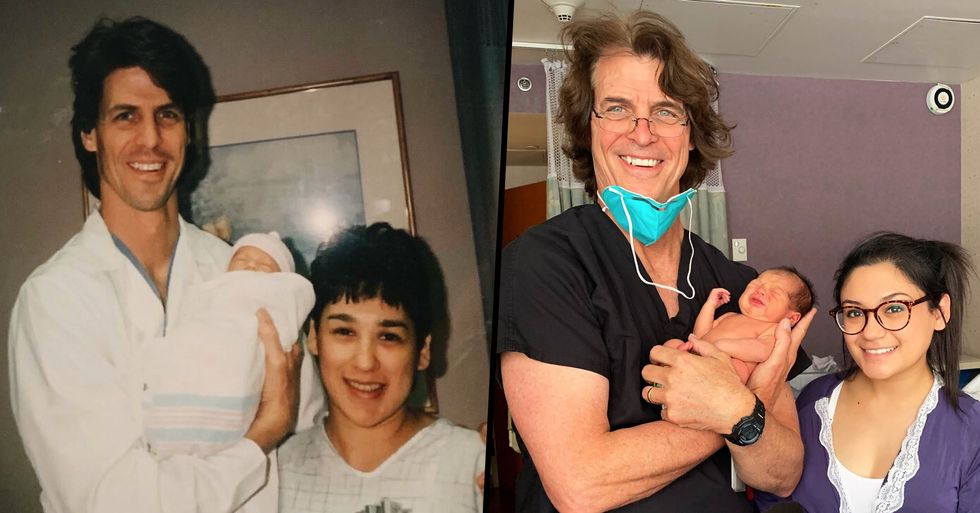 Midwifery is a noble profession.

There is no other job quite as important as the job of bringing life into the world, is there?

Most of these doctors will deliver thousands of babies throughout their careers...

So generational deliveries from the same families are somewhat uncommon, right?

Well, you would be wrong.

It turns out that many doctors have delivered babies from generations of related women... And now, one woman has come forward with her own remarkable tale of a generational doctor.

Lauren Cortez experienced the most incredible coincidence when she was expecting her first baby.

The twenty-five-year-old speech and language pathologist, from San Antonio, Texas, fell pregnant late last year and, when choosing her doctor, she knew exactly who to go to.

She decided to return to the very doctor who had delivered her twenty-five-years earlier, Dr. Bryan Cox.

Speaking to 22 Words, Lauren explained: "My mom still continues to see this doctor to this day and she always told me how awesome he was when he delivered me. She would also tell me all the great things about him and what made him so special."

After that, who else could she possibly go to?

Lauren continued: "So, when my husband and I were starting a family, my mom reminded me about Dr. Cox and that’s when I switched over and started seeing him."

Dr. Cox proved to be the perfect doctor for Lauren...

Which may not come as a surprise to some, you know, considering he had assisted in bringing her into the world.

Baby Logan arrived with no complications...

And, to celebrate his arrival and credit the work of her doctor, Lauren decided to post a throwback photo onto Twitter, alongside a photo of Dr. Cox with her baby. She captioned the photos: "25 years later, the doctor who delivered me also delivered our son!!"

She explained: "I honestly was not expecting to go viral over this considering that he has done generational deliveries before."

But she thinks it may have been mainly down to a slight pronoun misunderstanding.

Hilariously, many people thought that Lauren was announcing that she'd had a baby with her doctor.

"I originally intended the post to be for my family and friends, so when I said 'the same doctor who delivered me delivered our baby', I knew that they would know that 'our' was referring to me and my high school sweetheart, Peter."

But she was pleased that her post made people smile, regardless.

"Needless to say, it was a good laugh for everyone including myself, my husband, my doctor, and his wife!"

Lauren also noted that, after going viral, several of his past patients had reached out to share their own memorable experiences with the popular doctor.

"I was so happy to read the countless people who reached our saying positive things about Dr. Cox and their own experience with him - I think it says a lot about this man and his passion for delivering generations of families like this."

And, according to Lauren, Dr. Cox has loved his newfound viral fame.

She explained: "He's been enjoying reading the comments and seeing many of his former patients comment on the tweet. He is not as active on social media but his wife is and she and I connected after this tweet blew up."

Where are the photos?!

A youthful Dr. Cox can be seen smiling boldly with an arm around Lauren's mom, all while carrying a baby Lauren in one hand.

Here is a still youthful Dr. Cox with a grown-up Lauren and her baby, Logan.

Rather than marvel at the amazing generational story...

Many chose to marvel at his incredible head of hair... Not that I can blame them.

And Lauren only hopes that one day, her son can one of Dr. Cox's patients. "I really hope that Dr. Cox continues to practice until our son, Logan James Cortez, has a baby of his own."