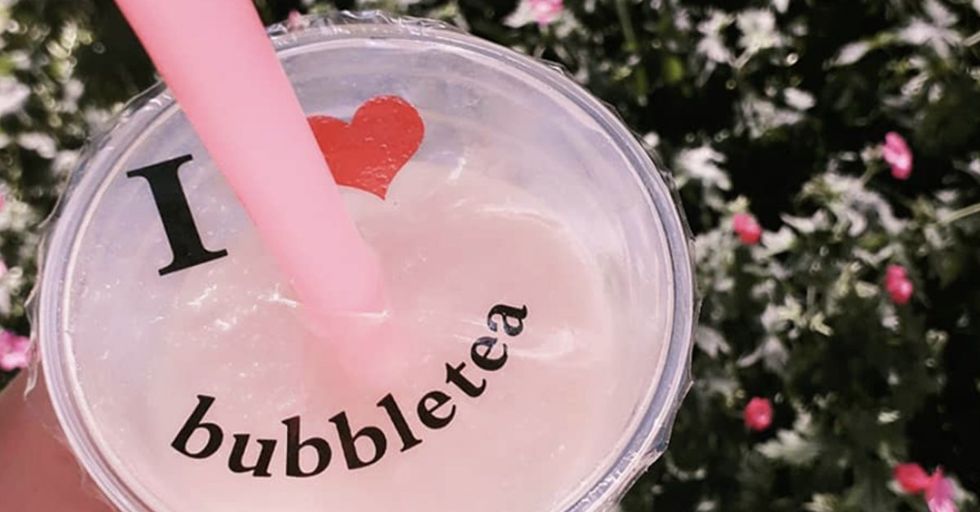 Bubble tea is one of God's gifts to mankind. Delicious tea. Sweet tapioca bubbles. So many flavors. There's literally nothing that could ruin bubble tea.

Of course, now that I've written that I'm obligated to share something with you all that will ruin bubble tea. I'm so sorry. Read no further if you want to continue enjoying your delicious tapioca balls in peace. But if you want to know the truth about bubble tea, it's time to keep reading.

A fourteen-year-old girl in China was hospitalized last week after she suffered from constipation for five days. Can you guess the reason? Yeah, it has something to do with bubble tea and you're not going to like what they found when they scanned her stomach. Spoiler alert: it was not digested food. And it is going to make you question your choices the next time you order bubble tea. Are you ready to face the tea truth?

It's a hot day out and you just want a refreshing beverage.

You stop into a local cafe.

And you see one of your favorites on the menu: bubble tea.

You can just imagine it.

Flavorful tea, creamy milk, and the best part: the sweet tapioca pearls at the bottom.

You order it. You're so excited.

You're just about to chomp down on one of those sweet, sweet pearls when you remember:

That girl in China.

The one who was constipated for five days...

She couldn't eat and was in major pain...

And what was causing all this distress?

The girl reported that she had been drinking bubble tea five days prior to her symptoms.

But one doctor suspects that there might be more to the story.

Based on the number of pearls in her stomach, this wasn't just a cup tea or two.

She'd have to have drunk a lot of bubble tea for the problems to become this bad.

So, are we all carrying around piles of tapioca balls in our tummies thanks to bubble tea?

Well, maybe, but probably not.

Bubble tea pearls are made of tapioca.

Tapioca is made of cassava root, a starchy vegetable that is surprisingly tough to digest.

That doesn't mean that everyone will have undigested pearls in their system.

But if you're going buckwild on the boba tea, you might want to cool it.

If you're worried about the health consequences of the tea, constipation is probably the least of your worries.

Those little pearls are basically small sugar balls. Delicious? Yes. Healthy? Not so much.

Not only are they sugary, they're also carby.

Which can drive their calorie count up quickly.

Add on to that the flavor syrups that are used to give bubble tea its sweet flavor...

And you've got a drink that's a little more like a dessert.

This isn't the first health scandal that has plagued bubble tea.

Let's take a quick look into its history, shall we?

In 2012, German researchers looked at what was in bubble tea.

They found something called polychlorinated biphenyls. These are associated with cancer, damage to the nervous system, reproductive system, immune system, and endocrine system. Yikes.

And, in 2015, a TV reporter in China also found undigested pearls in her stomach.

Her story runs a little differently though; further investigation found that the pearls contained bits of old tires and the soles of leather shoes... ew.

So there are a few reasons to be suspicious of bubble tea.

But it's not enough for everyone to back off.

Some Twitter-users seem uninterested in giving up their delicious tea.

Sure, it will kill me, but it tastes good.

Other people were suspicious of the whole story.

Saw the post on the kid in China supposedly having undigested bubble tea pearls in the X-ray causing constipation.… https://t.co/qX9CFefStT
— yoong (@yoong)1559897137.0

This kind of starch apparently shouldn't cause problems like this.

X-ray in the article looks like impacted stools from constipation. If anything, the sugar is the culprit for consti… https://t.co/alK90Ogrp2
— yoong (@yoong)1559897243.0

But the picture included with the story has gotten a lot of flak.

Buy the way, The picture is obviously a constipated colon. Faecal loaded gitu. Not a stomach. I’m not against boba… https://t.co/VN9VkIUu0t
— Alluskin 🇲🇾 (@Alluskin 🇲🇾)1559885928.0

Apparently, it's not even a stomach...

Doctors, in particular, were having none of it.

I love it when medical professionals get sassy.

But some people are convinced.

Are you on team bubble tea?

Or would you rather play it safe than sorry?

Whether the tea causes constipation or not...

It seems like we should definitely recommend drinking it in moderation.

But I would never force someone to give up bubble tea.

So get out there and have some tea for us.

Just make sure you stay hydrated; those sugars can screw with your digestion.