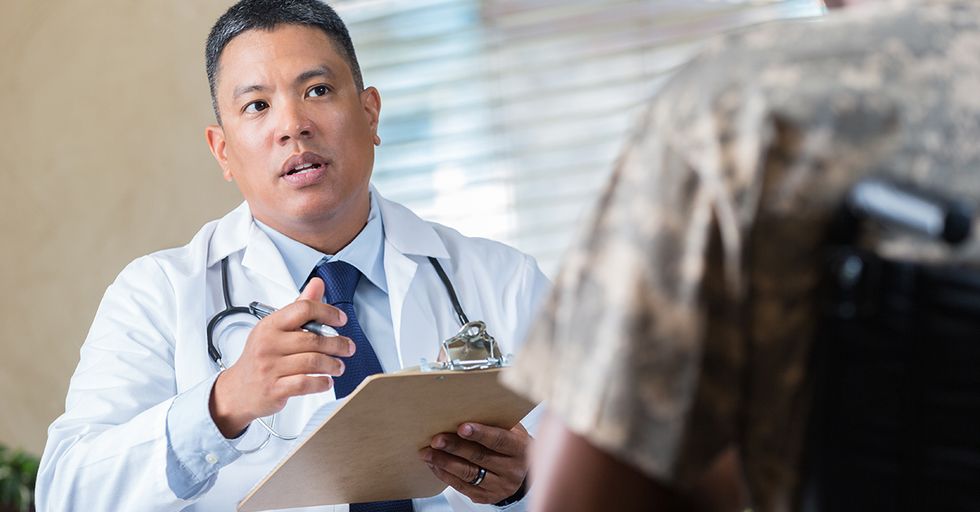 OK, let me just start out by saying this: If you are sick, you should go to a doctor.

I know it's inconvenient and expensive and an all-around hassle...but you should do it anyway. Doctors are trained professionals who have more knowledge than you do about how the body works. Whatever you do, do NOT try to DIY your own medical care like the people from this AskReddit thread did.

(Also, fair warning: Some of these stories are pretty gross. Read them with caution.)

I work in dental and years ago had a patient attempt to super glue her front tooth back on after it broke in half. She screwed up and ended up gluing the chunk to her upper lip. – 12awr

An old lady told me the rain hurt her arthritis. That's reasonable. She also swore that dog spit had healing properties so she let her dogs lick her feet when she felt it coming on. She then wanted to show me a video of said dogs licking said feet. I swiftly and politely declined. – lacamaguzi

My mom once melted Vick’s Vapor Rub into my tea because she thought that would help my cold. It didn’t. – apostrophie

This lady with some kind of cellulitis or something shows up with rainbow streaky legs... someone told her nail polish is good for healing skin or something. – PurpleStegosaur

A man who'd accidentally sliced his leg open at his workplace. He obviously figured that as surgeons use staples to close wounds, he'd cut out the trip to hospital and DIY. With an ordinary desk stapler. Arrived in ED with a pus-filled wound with the odd discoloured staple hanging off it some days later. – aeon-lakes

(OK, for real though. This next one is pretty gnarly. Don't say I didn't warn you.)

One time, when I was in nursing school, I was doing ER clinical and a guy came in with “penile pain." Long story short, several days prior, he decided he wanted a penile texture implant to help enhance pleasure during intercourse for his lady friend. He and his buddy got drunk (of course) and decided to do it themselves. So they went in his garage and took a box cutter to slice open the skin on the dorsal (top) side of his penis, made some room between the skin and underlying muscle, and put a small porcelain heart underneath. Then he superglued it shut. To make matters worse, the guy didn’t wait for it to heal and decided to take it for a test run. He ended up with a major infection and presented several days later. I unfortunately don’t know the outcome, I was just there for the porcelain heart extraction. Can’t make this sh*t up. I’ve now worked in a surgical/trauma ICU as an RN for two years, and people never cease to amaze me – meatcoveredskeleton1

When I worked in ER, my colleague had to see a guy with an ear problem. He had something stuck in his ear and had been trying to get it out. This wasn't a new thing, he'd been trying for some time.

Turned out, he had completely removed his tympanic membrane, and the "bits" that were stuck in his ear and that he was trying to pick out with cotton buds and hair clips were his ossicles. – frankiesausagefinger

White bread soaked in milk placed on an armpit abscess to draw out the infection. Needed an I&D and a couple weeks of IV antibiotics by the time he got to us. – gingerybiscuit

Dental student here. We had a patient who declined a much-needed cleaning, saying he could do it just as well a home with a scalpel. Didn’t brush his teeth but every few weeks he would go at the accumulated plaque and tartar with a scalpel. Same patient also insisted we do a procedure without local anesthetic. He was an amateur boxer and was building up his pain tolerance. He also told us he smoked 20 blunts a day and only drank coke. We could tell. – thefrenchdentiste

A 50-year-old man swallowed a chicken bone while eating, and it got stuck down his throat (upper esophagus). Unable to take it out with his fingers or coughing, he got a fish hook with a line and tried to rescue the bone with it. He ended in an emergency department with both the bone and the hook in his esophagus. – cassaffousth

(This next story starts out bad but ends up not quite as bad.)

Had a patient come into the ER with a makeshift bandage on his shin. He had fallen on rocks while hiking and left a three inch long, half inch deep gash in his leg. I go to pull the bandage off and as I’m peeling it away I notice the skin is completely black and there’s dark chunks of fungus falling out of the wound.

It looked necrotic, like it had been left alone for a week. I look at this guy like he’s crazy as he tells me the wound is only a few hours old. He’s pretty proud as he explains that he created a makeshift poultice by chewing up leaves and moss, mixing it with river mud and stuffing it into his leg. That’s what all the black mossy stuff was. Hint: Don’t do this. – coffeeartst

Dental office. Patient comes in with "veneers" on her front teeth she made herself out of acrylic nails (the premade sets you can buy at Wal-Mart). Surprisingly it looked OK from a distance, but the amount of random glues she used in her mouth to get them to stay will probably come back to haunt her later. – Beek3r101

Had a patient come to the ER for a cough. We did a chest X-ray that caught a little something in the abdomen/pelvis. Did a pelvic X-ray. Long story short, she stuck a shot glass up her vagina for “birth control," left it up there long enough for it to calcify and we had to surgically remove it. – jumo02

A woman I know has a dog that is epileptic but was not willing to medicate the dog for some time. She kept trying "holistic remedies." One of which, she informed me, was giving the dog all-natural vanilla ice cream during a seizure to stop it. You know, because you should always try to put stuff in the mouth of a seizing animal. It didn't work. The dog is on meds. Seizures are controlled now. Imagine that. – KellyK_CVT

Had a gentleman walk himself into the ED one day after he tried to give himself a vasectomy with an animal neutering kit he bought on the internet. When asked why, he said that his wife wanted to have a sixth kid and it was too expensive to pay a doctor to do it and how hard could it be to DIY. – iilumos

Infections of the skin of the external ear canal are common and treatable. Hard to get to, though. A dairy farmer who didn't have time to see us got a long rubber tube that he used for something to do with cows (not sure what), fed it into his ear canal, then poured cow antibiotics down the tube. He came in when it didn't work. – dr_pr