The documentary will also cover the mystery behind the mask. | 22 Words 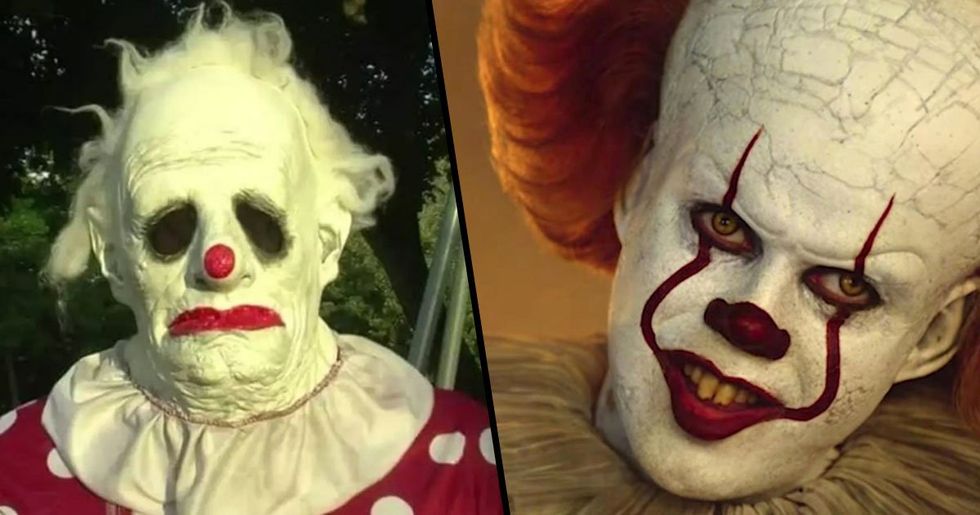 Stephen King's horrifying depiction of fear itself, Pennywise, aka the terrifying clown from IT, has made quite the impression in the world of horror. The famed clown, known for terrorizing children, has become one of the genre's most iconic figures and sparked the release of a number of movies under the franchise.

But while Pennywise was nothing more than a chilling creation by King, it seems he may not be a complete work of fiction. Dubbed as the "real-life Pennywise," Wrinkles The Clown shot into the public eye when a horrifying clip of him emerging from under the bed of a little girl went viral online and spurred on the so-called "killer clown epidemic" in America.

Now, a documentary has been released telling the true story of this petrifying, unidentified clown and people are saying it's more disturbing than IT: Chapter Two.

Keep scrolling to learn the horrifying true story that saw Wrinkles terrorizing a whole community and why the doc is a must-watch for any horror fan.

IT is one of the most iconic horror movies of all time.

Originally released as a horror novel in 1986 by the grizzly genius that is Stephen King, the story of Pennywise the clown has very recently been brought back to life.

The movie tells the tale of an ancient evil entity haunting the town of Derry, Maine.

“The Losers Club," a ramshackle troupe of kids, discover this demonic entity and bravely vow to destroy it. However, the monster, which resurfaces every twenty-seven years to feed on innocent young children, thrives off children’s fear, so it is therefore quite impossible to defeat.

IT has been fantastically remade.

The horror movie was originally released in 1990, when Tim Curry portrayed the demonic, yet noticeably less-spooky Pennywise.

But a modern-day Pennywise? Simply formidable.

When Andy Muschietti’s IT Chapter 1 was released back in 2017, people were both horrified and thrilled to see the terrifying transformation that Pennywise had gone through… with a little help from CGI, of course.

Today's Pennywise has upped the bar for scary movies.

Because come on. You wouldn’t want to see that stood at the end of your bed in the middle of the night, would you?

And let's be honest, Pennywise the clown is a truly frightening creation.

While he tends to stay predominantly in his creepy-clown form, Pennywise is actually representative of fear itself, and so can take on any form. This means that the experience of watching IT is like watching dozens of horror films at the same time.

Though it seems he may not be a complete work of fiction after all.

Remember that weird and very scary killer clown epidemic that seemed to take over America a few years back? Yeah, well, a clown named Wrinkles pretty much set the whole thing off and he's been dubbed as the real-life Pennywise.

Those intrigued to know all the grizzly details of Wrinkles' chilling antics are being treated to a full-blown documentary.

Depending on how into horror you are, you'll be pleased (or not so pleased) to know that a documentary on the terrifying figure has just been released and it's shaped up to be even more disturbing than IT Chapter 2.

Wrinkles The Clown was created by an unidentified performance artist residing in Naples, Florida.

Wrinkles shot into the public eye when a grainy, black and white video surfaced of him emerging from underneath a child's bed.

As well as being utterly nightmare-inducing, the footage well and truly terrified the locals of Naples.

But things were ramped up a notch when locals spotted him wandering the city.

Meanwhile, hundreds of posters and stickers with his ghoulish face and phone number were posted around warning residents of the tormenting character.

And of course, there were several copycats...

A bunch of wannabe Wrinkles were popping up all around the country trying to scare the **** out of everyone. It all started with one online video, and soon after, we saw a whole epidemic sweeping the entire globe.

But that's not even the most disturbing part of this bizarre clown persona...

Parents can reportedly hire him to scare the living daylights out of their kids.

And the documentary sheds a whole new light on these petrifying antics.

The spine-chilling spectacle, made by Magnolia Pictures & Magnet, follows the man who’s identity is still unknown. In the trailer, we see home-made clips of Wrinkles walking around with balloons, looking in windows, and even hiding underneath a child’s bed - just as depicted in the real-life clip that initially skyrocketed him to viral fame.

And of course, viewers will watch him running his disturbing business.

After posters emerged around the town, parents began to hire him to freak out their kids. Very questionable parenting, to say the least.

Can you imagine this guy hanging around your house?

The documentary will also cover the mystery behind the mask.

While Wrinkles somehow managed to cling onto his anonymity, the doc sets to unpick some of the mysteries around his true identity.

The man behind the mask has previously spoken out about what it's like to scare kids...

The anonymous performer behind Wrinkles recalled scaring one particular child,  saying: “He was scared of clowns and I showed up across the street from him at the bus stop and he just started crying in front of his friends and ran home." “His mother called back a few days later and said, ‘Thank you!’ Now when he acts bad, she just has to ask him, ‘Do you want Wrinkles to come back?'"

The doc has already had an overwhelming response.

Just watched the Wrinkles the Clown documentary! A creepy look into folklore, scary clowns, and the kids who love… https://t.co/hFp0KNDRwy
— Jen (@Jen)1570416441.0

The general consensus has been that firstly, people didn't know Wrinkles was an actual thing, and secondly, he's hella creepy.

Check out the trailer below (if you dare):

It's certainly more disturbing than the IT movies! Meanwhile, if you're looking for more horror-related viewing, keep scrolling to learn about Netflix's new horror Eli, which has been leaving people so terrified they've been "seeing demons out the corners of their eyes."