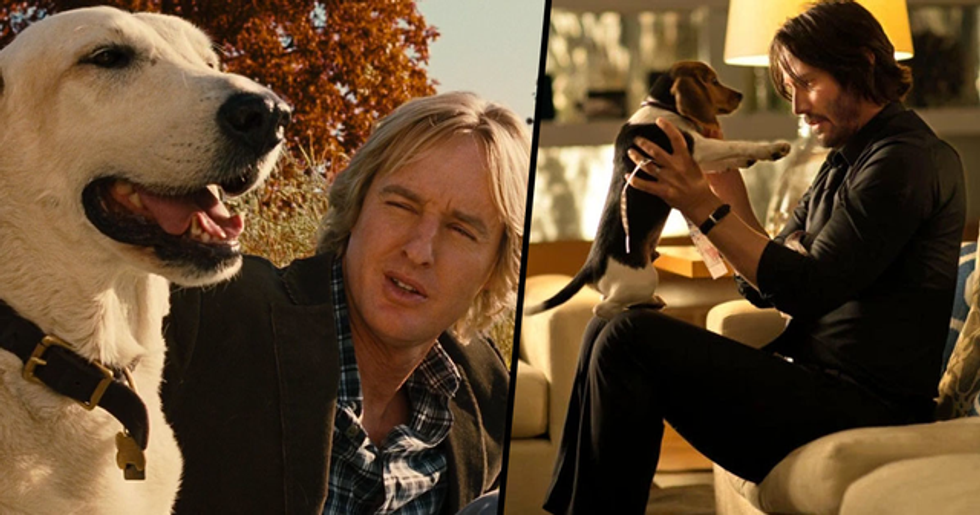 Now if you're somebody that doesn't like spoilers, or you're the kind of person that gets annoyed when you watch a movie with somebody who has already seen said movie, who nudges you when good bits are coming and accidentally slips up and spoils character story arcs, then doesthedogdie.com probably isn't for you.

If you are somebody who is easily "triggered," and, by that, I mean are infused with anxiety when you watch something distressing on screen, then, my friend, doesthedogdie.com is probably a website that you will want to check out.

Sometimes, all you want from a movie is an excuse for a good cry.

I don't know why Netflix doesn't have a "weepies" category. Maybe it's impossible to determine what will make everyone cry and perhaps promising that a movie will do that is just too high of a stake.

Would we still cry if we knew what was coming?

Personally, if someone tells me that a movie is going to make me bawl my eyes out, it probably won't. This isn't a concrete rule, but there's some part of my subconscious that is stubborn enough to battle against the expectation if someone else sets it.

Part of the emotional grief comes from the "that's not what was supposed to happen" feeling.

That, or the "that's not what I wanted to happen" feeling.

When we watch a movie, we are powerless against the outcome.

Unlike in life, wherein we can navigate conversations and situations, we are powerless against the way that a movie ends. In real life, if you find yourself caught in the crossfire of something horrible, say a man and his wife having a violent argument, you have a choice as to how to proceed. If you don't want to get involved and you don't want to witness it, you can leave. If you feel compelled to intervene, perhaps defend the party that you believe to be in the right, you can raise your voice and become involved. When we are watching a movie, we might as well have our hands tied behind our backs and our mouths gagged.

As a spectator, the only armor that we can bring to the movie theater is our minds.

Emotion comes from our cognitive response - this is linked to a series of mental processes: reasoning, perception, knowledge (yes, I did read film theory at college). If any of these three things (our reasoning, perception, or knowledge) differs from the person sat next to us in the movie theater, we are more than likely to experience a different emotional response.

Can you be upset by a predetermined truth?

If the weather girl tells you that it's going to rain on Tuesday, would you be distraught if it did rain on Tuesday? It's unlikely. What is likely is that, knowing what weather to expect, you'll take your umbrella with you when you leave the house on Tuesday.

Forewarning allows you time to prepare.

Perhaps that's why I don't tend to get upset by movies that I have been told will upset me. I go into the screening with my guard up.

This is what separates people that like spoilers and those that don't.

Those that don't like spoilers would argue that they ruin the movie; they "spoil" it. These people aren't necessarily wrong. One of the most influential filmmakers of all time, Fredrico Fellini, was certainly someone who didn't like spoilers. Fellini once said: "Going to the cinema is like returning to the womb; you sit there still and meditative in the darkness, waiting for life to appear on the screen. One should go to the cinema with the innocence of a fetus."

"The innocence of a fetus?"

Basically, I think that what Fellini is saying is that if you watch a movie without preconceptions, opinions, or knowledge, and leave yourself completely open, you will experience the movie fully. If you go into the movie theater with your guard down, like a fetus, you will go through an emotional journey.

"Cinema should make you forget you are sitting in a theater."

Roman Polanski said that and I think that it comes back to what Fellini was saying: to be fully immersed, you have to go in blind and innocent. What fun would life be if you knew what was going to happen? And as Hitchcock said, (sorry this is the last quote I swear!) "Cinema is life but with all the boring bits cut out." That quotation was written on a poster in my high school drama class and it's been stuck in my head ever since. It's true though, isn't it? And if movies are supposed to be a reconstruction of life, surely you don't want to watch a movie knowing what's going to happen?

Maybe, sometimes, we don't want to be taken on an emotional journey.

Ever been sprawled out on the couch on a Sunday afternoon after a night of heavy drinking, flicking through the options on Netflix, looking for something easy and cheerful to watch?

We have this saying in my houseshare: "nothing too stressful."

Sometimes, especially in this day and age, everything can feel a bit much. All of us seem to have anxiety that's through the roof, and, when we can't face the world, who do we turn to? No-one can quite make us feel as safe and sound as our bedsheets and Netflix accounts.

"Recommended for you x"

A Netflix account can almost bridge that gap of having a loving partner, the kind that would make you mixtapes. Day or night, I can log into my Netflix account and find a sea of movies and TV shows recommended just for me. They'll even remind me if I've seen it before, good old Netty.

But, like any loving partner, they don't warn you when things are going to go down the pan.

Such is life. Heartbreak is an inevitable process that we all have to face. Like death and dealing with taxes, heartache is all part of the wild ride of being alive. If movies are life with all the boring bits cut out, we ought not to need the warning that will let us know that our emotions be taken on a bit of a ride. Saying that, for a platform like Netflix, which can categorize movies, surely there's a way to categorize the kind of emotional journey that we ought to expect?

No one walked into Bridge to Terabithia thinking that little girl was going to die.

I'm not even going to apologize if I spoiled it for anyone who hasn't seen it, you're better off knowing. Bridge to Terebithia? More like Bridge To Tear-My-Heart-Out-Will-Yer. Who turns on a movie about a fantasy land full of magical creatures to endure the heartache that comes with a plot that details the lives of a couple of low-income family kids making up a dream world in the forest before a cool little girl with bouts of potential gets drowned in a river stream? If that's life, it's sure not an aspect of life that I wanna be reminded of.

Maybe that's what it boils down to - we don't need any more reminders that life is, ultimately, tragic.

Doesthedogdie.com is a buffer between life and death.

In real life, there's no real way of knowing when tragedy will strike. Sometimes we get a bit of forewarning with a diagnosis, but then it's the diagnosis itself that comes as a surprise. I feel as though Doesthedogdie.com is a website standing up to the uncertainty, offering a way of consuming media without the distressing surprise of death.

This isn't just a handy tool for the emotionally vulnerable, it's good for kids, too.

I'm sure that there were a fair few parents who accidentally sat their young kids down to the "family-friendly" movie, Marley & Me... A Saturday night that was intended to be a chill family bonding experience would have inevitably become an evening of snot, tears, and a knock on the bedroom door at two in the morning of a child who wants the concept of death explained to them. Cheers, Jenifer Aniston and Owen Wilson, you beautiful tricksters, you...

There's something about dogs specifically though isn't there?

Not everyone will feel this way, but, personally, I think that humans are intrinsically flawed. Maybe it all goes back to Adam and Eve or whatever but I've sort of become resigned to the fact that we all die, you know? It's not that we deserve death, but, more of a question of whether or not we deserve life. That sounds heavier than I meant it to, but humans are so destructive and complicated that it's like... "Oh right, yeah, they've died." Whereas a dog... What's a dog ever done to hurt anyone? All a dog ever does is run around and ruffle its golden fur. Maybe it's animals in general. Did you ever watch War Horse? God, it's so hard to watch that scene when it gets caught up in the barbed wire... Maybe the same goes for non-human beings, like Wall-E for example; no-one wanted to see Wall-E die. Did anyone really give a monkey whether the humans lived? I sure didn't.

So how does the site work?

Basically, the genius of Doesthedogdie.com is its simplicity. About to watch a movie with a dog in it? Type the title into the site and see that the kind general public may well have voted to say whether that particular dog in that particular movie dies. If you watch a movie that's not been voted on, feel free to contribute to saving other hearts from the pain that you had to endure. The same goes for TV shows and other media outlets too - they even have a section for podcasts. What started as a site specifically targeted at warning people about dogs' deaths has expanded to incorporate all sorts of animals: horses, pigs, you name it, they've got it covered.

So next time you find yourself sloped on the sofa wanting to watch a light rom-com...

via: Does The Dog Die

And you're absolutely not emotionally prepared to mourn a dog, or a cat, or even a goddam kestrel, maybe you ought to check in with doesthedogdie.com. The thing that sets this site apart from just googling the movie itself is that the rest of the synopsis won't be spoiled. You don't have to sieve through all the ins and outs of the plot; with a simple "yes" or "no," the site tells you whether the dog is a goner or not. Who knows, maybe there's even a demographic out there of people who only want to watch movies were the animals do die? Maybe you've just lost a pet and want to know that you're not alone, or maybe you want to watch someone else go through the mourning process in order to prepare yourself for the inevitable death of your beloved pet. Maybe you're just a weird sicko that hates dogs. Whatever you're into, doesthedogdie.com is a thing now, check it out if you want.