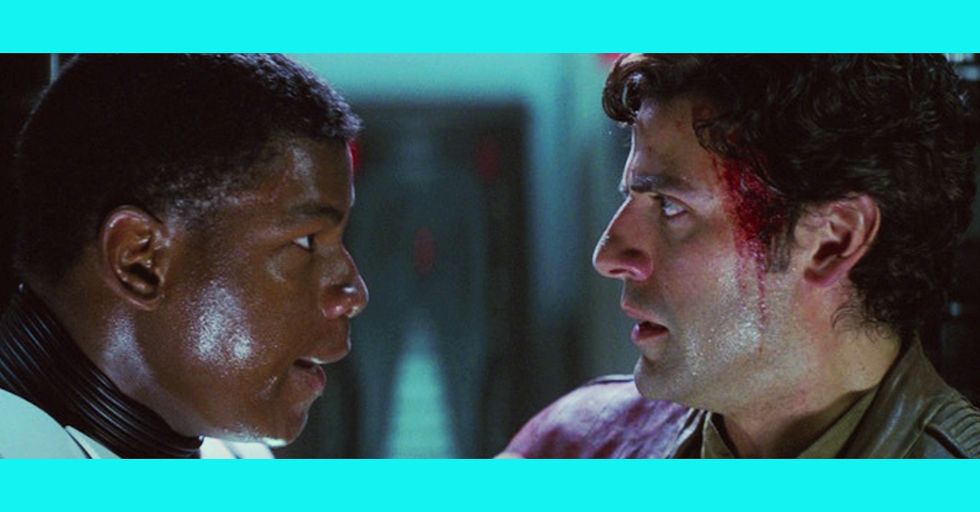 The newest Star Wars films have done a lot to improve representation on-screen. We've finally seen a black lead character in John Boyega's portrayal of Finn. We've got a female Stormtrooper in Captain Phasma who battles assumptions that all Stormtroopers are men (an assumption we didn't even realize we had until we saw Gwendoline Christie totally kill it in Force Awakens). Thanks to Kelly Marie Tran, we've finally seen an Asian-American woman with a lead role in a Star Wars film! Between Rogue One and The Last Jedi, we've seen more badass female pilots and fighters than we could have even hoped for.

However, we haven't seen any Star Wars characters who are also members of the LGBTQ+ community.

OR HAVE WE?! A Star Wars novel published earlier this year heavily implies that one of the characters in The Last Jedi is queer. But who?

Unless you've been living under some kind of space rock, you know that the new Star Wars movie came out last week. We recommend you use the Force to lift that space rock and get to a theater ASAP.

Watch it once for first impressions, then see it again to catch all the details you missed the first time. As with all Star Wars films, the latest one brings its own set of fan theories and speculation.

Ever since The Force Awakens came out in 2015, people have speculated about the possible romantic interests in the film. There are a lot of people who ship these two:

That's Finn (played by John Boyega) and Poe Dameron (played by Oscar Isaac). Finn is a former Stormtrooper who left the First Order and joined the Resistance. Poe is a Resistance pilot.

There's a lot of chemistry between the two characters. Just watch this clip from Force Awakens:

There's even a "ship name" for the two (that's like "Brangelina" but for fictional characters). People call Finn and Poe "Stormpilot." ('Cause one's a Stormtrooper and the other's a pilot. You get it.)

Seriously, "Stormpilot" is a huge deal online. Even the actors who portray Finn and Poe are in on it:

Do a brief search for "Stormpilot" on Twitter or Tumblr and you'll be bombarded with fan art and theories like you wouldn't believe. (In fact, it might be best to do that search when you're not at work, if you catch our drift).

So when the new film came out, people were anxious to see whether director Rian Johnson had finally given the Stormpilot shippers the romance they wanted to see.

Spoiler art: He didn't. In fact, Poe and Finn spend most of the movie in separate parts of the galaxy. Stormpilot shippers are still holding out hope, though. However, those who were hoping for there to be queer representation in the new film need not despair! There's another character in The Last Jedi who might totally be on the LGBTQ+ spectrum.

holdo appreciation tweet because she did THAT and deserves all the love and praise, i was not expecting to love her… https://t.co/olzks4QiCT
— carlos (@carlos)1513408986.0

She plays an incredible role in the film as General Leia's right-hand woman. While Leia is recovering from being blasted out of her ship's cockpit, Holdo is appointed the interim commander of the ship (much to Poe's chagrin — and our delight).

In addition to being a total badass, the novel Leia: Princess of Alderaan by Claudia Gray includes a passage which heavily implies that Holdo is LGBTQ+.

The novel is set prior to the events of A New Hope when Princess Leia is 16 years old. She meets Amilyn Holdo (who has green hair in the book) and the two become fast friends. At one point in the book, Leia and Amilyn are talking about the possibility of an interspecies relationship. Here's an excerpt:

“A pair of pretty dark eyes." Then Amilyn thought about that for a moment. “Or more than a pair, if you’re into Grans. Or Aqualish, or Talz. Or even – " “That’s all right! Leia said through laughter. “It’s just humanoid males for me." “Really? That feels so limiting." “Thank goodness it’s a big galaxy."

Many people are convinced that Holdo is actually bisexual. And that's not it —

They're also now shipping her with General Leia. We can totally see it! In a franchise that has struggled in the past with representing people from all walks of life, it's time for some queer characters, already!

Are we gonna get a spin-off? Han Solo gets one! Why not Leia, too?

Regardless of whether Holdo is actually, in-canon queer, we loved Laura Dern's performance.

But we're still holding out hope that this theory could prove true. After all, rebellions are built on hope, right?