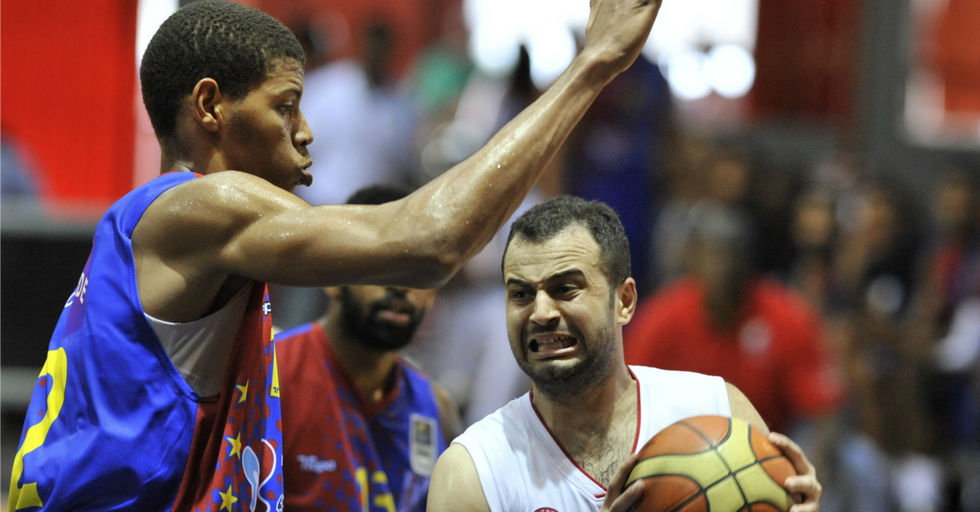 Does This Basketball Player Have the Biggest Hands You've Ever Seen?

Hand size matters, especially in the world of professional sports. But few of us realize just how dramatically super-human some professional athletes can seem. When the NBA shared a picture of the Cavaliers' Walter Tavares, it made waves not only because he was named the defensive player of the year, but also because he looked like he could cost the league a lot in crushed basketballs.

Walter Tavares, also known as "Edy", only started playing basketball when he was 17.

But even in the small African island nation of Cape Verde, he stood out. It would've been hard not to considering he is over 7 feet tall. 7 foot 3 inches, to be exact. So yeah, he's a pretty big guy.

Tavares just signed to the Cavaliers this year.

But he's already towering over the competition. There's no better way to put that. He's a cut above all the rest.

But his general body size isn't the only thing that's shocking people.

It's also the fact that basketballs might need to be made bigger to accommodate his hand size. Honestly, the ball in this photo would look terrified, if a ball could look like it was having an emotion.

People noted that his hands are almost able to completely enclose the ball. Like, he can almost hide a basketball in his hands. Probably a useful skill when trying to prevent a steal on the court.

It left everyone wondering just what he was capable of.

These are hands that inspire fear, these are hands you don't mess with. Especially if you're a basketball that wants to live to see another game. But he's not the only player whose had us wondering if giants are real...

Big hands are all over the NBA.

As this photo proves, the Detroit Pistons player Boban Marjanovic has similarly gigantic mitts. Making handshakes awkward for average-size sportscasters everywhere. The Serbian is also 7 foot 3, meaning that he and Tavares should probably rule over us all. That is if we were just deciding by height.

But the logistics of this life sound noticeably difficult.

It might be fair to ask how these men do anything at all. From entering doorways to flying commercial airlines to buying pants, it seems like these are a couple guys who spend a lot of time navigating the world of us very small people.

And you can't talk about hand size without talking about Trump.

By comparison, Trump's hands are about a third the size. They barely even cover the basketball, let alone envelop it so gracefully. He's lucky the job of president isn't decided by who can hold the most votes in the palm of his hands.

Of course, there are some solutions for those with hand insecurity.

From fake hands, to hiding your hands literally all the time, there are ways to mitigate a case of hands-too-small. Unfortunately, if this is your plight, a career in professional basketball may not be for you.

But luckily, Walter knows how to stoop.

Dude has clearly been working on a good squat, which goes a long way towards making those around him feel on equal footing. Even though it still looks like you could drive a Mini Cooper through his legs.

But he'll need those big hands to hold all those trophies.

They say God doesn't give us more than we can handle, and in Walter's case, it seems he got the hands to handle what he's got. That makes sense right? Anyway, this guy has huge hands, with which to win huge trophies. Good for him.