Does Your Tendon Raise Up In Your Arm When You Do This? If So, Here’s What It Means | 22 Words 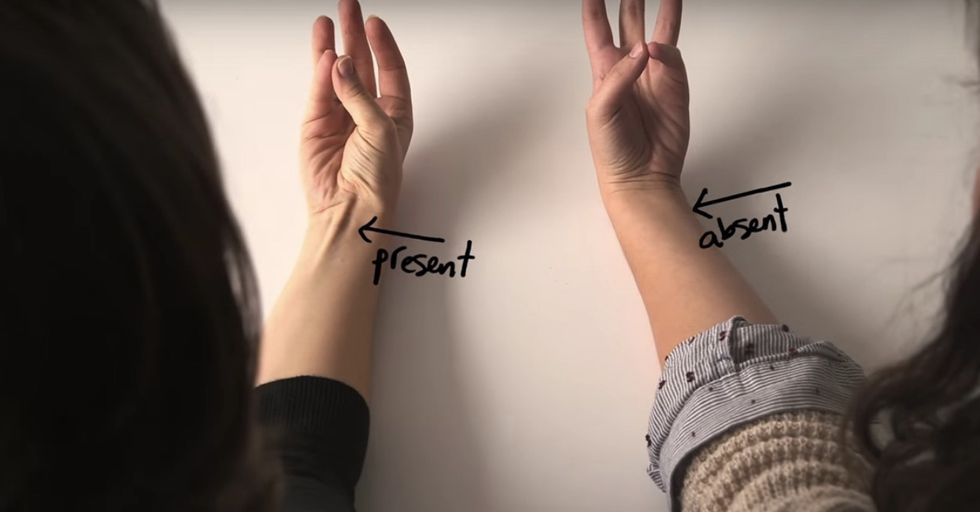 Does Your Tendon Raise Up In Your Arm When You Do This? If So, Here’s What It Means

If you're looking for the impact of evolution on humans, you don't need to travel to a museum. As you can see in the images and video below, your own body is host to an array of functions and parts that were once useful for our ancestors, but today serve more as oddities than anything else. Take a look.

It's not just a clever name. Your tailbone is an evolutionary remnant from primate ancestors with tails.

As we develop as embryos, it's more pronounced, but then stops growing quickly thereafter.

Tree-dwellers still depend on their tails for mobility, but humans? Not very much anymore.

Most humans live an existence that features coats and heaters, or, at the very least, fire.

But other animals don't have those luxuries, so when they get cold, their skin will puff up where feathers or fur break through to increase their internal volume.

This allows for more insulation to stave off the cold. It's not a very useful tool for modern humans, but it's not important enough for us to have shed, either.

As it turns out, there are quite a few things humans still have yet to shed.

So let's take a deeper look at some of the more under-the-radar things that you might not notice.

Surrounding our ears are three muscles we really don't use anymore.

Animals use similar muscles to move their ears in the direction of a sound so that they can get a beat on what's going on around them.

However, humans haven't been susceptible to predators for a while, so that function has pretty much left us, but the muscles remain. And that brings us to our next point. What about that weird muscle near your wrist?

The tendon on our forearm

About 10-15% of people still have the tendon on the left that was, like the vestigial tail mentioned above, developed to give primates a better grip on trees.

We spend most of our time on the ground, but that muscle hasn't left all of us.

Lay your wrists on the table and see if you've got a tendon connecting to the palmaris longus.

That makes us start to wonder though... What are humans going to look like as they keep evolving?

We can't know for certain, but scientists have a few guesses.

And one of the more common guesses is that the human eye will continue to increase in size.

Our eye sockets have increased in both width and definition as we've evolved.

So if this trend continues, we could end up some giant-eyed humans in a thousand years or so.

But, there is something even more powerful shaping how humans evolve. Technology.

Recently, the human race has reached a breakthrough in genetic modification. People are more familiar with genetic modification in things like food, but a new revolutionary technology is breaking through that will allow people to essentially "design" their own children.

Genetic modification is a moral grey area for some people, especially when it comes to altering human DNA.

But genetic modification could have serious benefits in things like eliminating diseases.

But if you're a little creeped out by the idea of "designer babies", you aren't alone.

It's amazing to see how far the human body has come, and even more amazing to think about where it might go in the future.