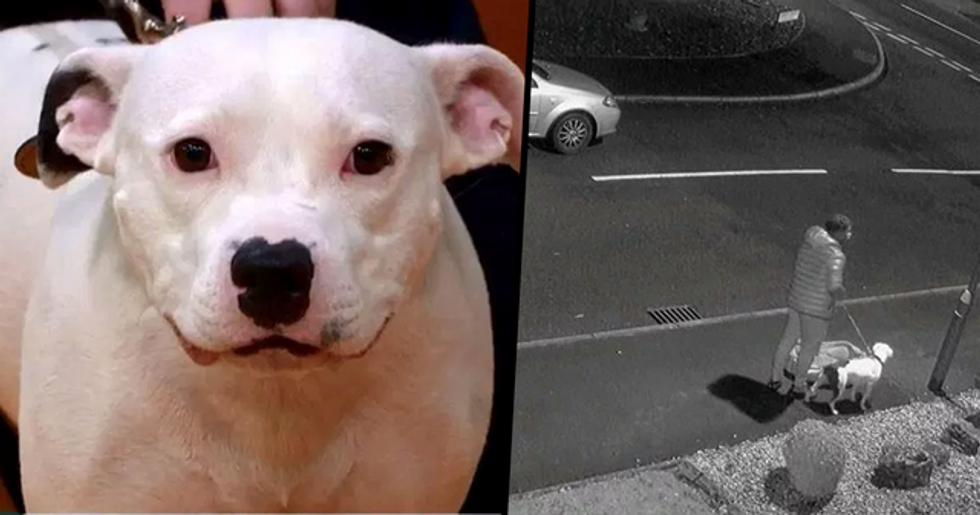 Dog Who Was Dumped Just Before Christmas Finds a New Home

As a child, we were all warned that 'A dog is for life, not just for Christmas.' Sadly for one pup, he didn't even get to spend the holidays with his family. In a very un-festive act, he was dumped just weeks before Christmas.

You might already be feeling tearful hearing about this, but wait until you see the video. It's truly awful. But stick with the story. There's a happy ending there somewhere.

Christmas is meant to be a time of love.

We've all heard the songs about Christmas. It's a joyous celebration and a time for being with the ones you love. If you so much as think a negative thought, you get called a Grinch. It all comes together to truly make Christmas the most wonderful time of the year.

People show gifts and affection on each other.

In the USA, people spend over $1 trillion shopping, while in the UK they spend over £2 billion. Everyone spends hundreds of dollars each year, in particular rewarding their family members. As pets are part of the family, they are by no means forgotten.

While animals might not understand exactly what is going on over the holidays, they are sure to enjoy it almost as much as their owners. It has been revealed that shoppers spend more than $5 million on their pets each year, just for Christmas.

But Christmas can be hard too.

Christmas is a stressful time of the year. It often requires people to spend a lot of time in close quarters with people they don't want to be around, while everyone is sleep deprived. Add to that the pressures of measuring up against people, explaining what you are doing with your life on repeat, and trying to live up to the standards of wondrous joy that are expected, and it's no wonder that some people crack.

Pets should be for life.

This year, it was the fate of a dog that captured the world's festive, mulled-wine and egg-nogg filled hearts. People couldn't believe the footage that was released just one week before Christmas.

Have you seen the video yet?

The video showed Snoop, the Staffordshire bull terrier, being abandoned by his owner in Stoke-on-Trent in the UK. It was a heart-wrenching video to watch, but it went viral and got over 1 million views.

December in England is far too cold to be out on the streets.

Poor Snoop was abandoned by his owner at the street, who also left him with his dog basket, as if that would be enough in the middle of winter. But then the footage gets worse.

How could he do this?

Snoop is so loyal that the owner has to try to trick him to leave him behind. He sends Snoop one way while he runs the other to get in the car. But Snoop doesn't give up easily. He thinks it's all a game.

It was so heartless.

As we see the driver is trying to get away, we can see Snoop chasing the car, wondering what's going on. To start with it looks like a game, but gradually the Staffie terrier starts to panic as his owners abandon him on the street.

Thankfully he was rescued from the December streets.

No one could believe that someone would give up this dog so heartlessly, especially as he was healthy and good-natured. Luckily two passers-by found him an hour or two after he was abandoned, and the RSPCA were able to rescue him.

People were quick to reach out.

Christmas is the perfect time for people to reach out and offer a home. Thousands of potential owners called in looking to re-home Snoop. Even his namesake, the US rapper Snoop Dogg, offered to take him in.

Laurence Squire was the lucky man who got to give Snoop a home in the end. He has a home in the Herefordshire countryside, with a large garden and lots of fields for Snoop to run around in.

The new owner has the perfect home for Snoop.

Squire had another Staffie terrier before and had already contacted the RSPCA to say that he was looking for a male Staffie. When he saw the news about Snoop, he knew that he could make a difference.

It was meant to be.

Squire said the he could tell in the video that Snoop was a loyal dog. He wanted to offer him the home he deserved. When they met at the RSPCA animal centre, they bonded right from the start.

The abandonment caused some issues for Snoop.

Although the abandoned pup isn't suffering any long-term damage, he is still suffering from separation anxiety. It's no wonder after being left behind like that. It would be frightening for any creature.

The RSPCA are trying to raise awareness about how lonely dogs can become. They have said that 'eight out of ten dogs feel scared when left alone, but most owners don't realise.' It must be even worse if they've ever been abandoned.

Snoop is now in the perfect home.

His new owner, Squire, has said that Snoop has settled in quickly and without issues. Apparently he likes to sleep in front of the fire, or else in a bed under the duvet. Sounds like Snoop is on the fast-track to a happy life.

He's even got a local pub.

Snoop is so comfortable with his new life that he's now considered to be a 'regular' at the local pub. It sounds like he and Squire will be very happy together.

People have been very glad to hear the good news.

This was the story that captured people's hearts. It was so sad to see the way Snoop was left on his own like that.

It's nice to hear some good news for a change.

There are so many pets that don't manage to find a new home. It is definitely worth celebrating when they do.

A forever home is just what Snoop needed.

Snoop's story affected over a million people. But with a grin like that, it's hard to believe that he wouldn't have found a home quickly anyway. But there are plenty of other dogs out there who still need a home.

Sadly not every tale ends in a happy ending.

Last year, the RSPCA rescued and collected 129,602 animals from across the UK. That's more than 350 animals every single day.

Who are the RSPCA?

The Royal Society for the Prevention of Cruelty to Animals is a charity in the UK that was formed back in 1824. It is the oldest and largest welfare organisation in the world.

It costs a lot of money to save so many animals.

The RSPCA is run almost entirely by donations. It works all over England and Wales and employs over 1,700 people. In order to rescue so many pets and creatures, the costs are huge. In 2017, it spent £129.4 million. That was just in one year.

Some people think that the RSPCA has too much power.

A couple of years ago, the Environment, Food and Rural Affairs Committee tried to get rid of some of the RSPCA's powers. At the moment, they can bring private criminal prosecutions against people that abuse animals. Some people worried that the RSPCA took animals off families too quickly, without giving them a chance to appeal.

The government rejected their appeal.

Firstly, everyone has the right to a private prosecution, so it would be unfair to stop them in particular from being able to do it. But it's the second reason that really wins the argument, and unsurprisingly, it is financial.

The RSPCA currently spends nearly £8 million each year on these prosecutions. If they didn't do it then it would fall to the Crown Prosecution Service. This would mean that the tax payer would have to foot the bill. Nobody wants that.

People need to think seriously about getting pets.

Pets are loving, loyal, fun, and seriously cute. But they are also living creatures that require care, food, a clean place to live, regular health checks, and usually a lot of training. They are not something to get on a whim.

Not all dogs are as lucky as Snoop.

Thousands of people offered this dog a home. I wonder how many people have offered a home to the thousands of other… https://t.co/sFaZhySY0A
— Gill (@Gill)1552462505.0

Snoop was lucky. His plight was turned into a national story that reached people at a time of year when people feel generous. But there are thousands of other dogs out there who are still looking for a home. They may not all be in good shape, but they are all looking for a loving home with caring owners.

Luckily Snoop got some good news.

It's not often that the world gets a good news story like this. Sure, Snoop has had a tough few months, but at least he has now found a loving home. And it looks like he is going to have a very good life from now on.