Dog Fakes Broken Leg to Get Treats From Tourists | 22 Words 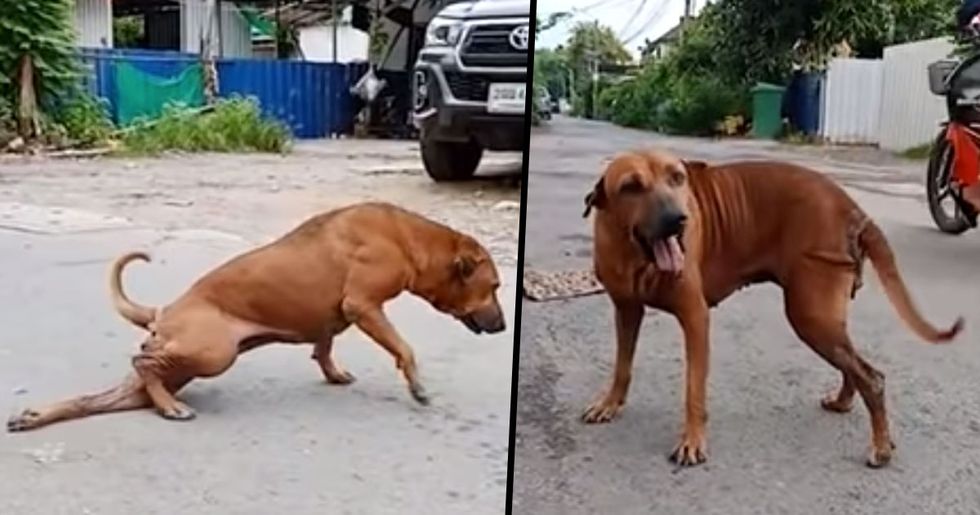 Dog Fakes Broken Leg to Get Treats From Tourists

Just when you thought that couldn't love dogs anymore, you realize that they're much closer to us than you ever thought. Viral footage of a dog being adorably sneaky has recently revealed to the world that, when it comes to snacks, dogs are basically humans.

The video shows a dog, nicknamed Gae, in Bangkok. Many canines in the area rely on tourists for their food (and all-important attention). But Gae has discovered a pretty unique way to stand out from the crowd. Want to see how he managed to trick thousands of unsuspecting tourists into offering him sympathy, strokes, and snacks? We've got the video that's brought a collective smile to the internet's face.

The internet can often be a pretty divisive place.

Because so many of us can now hide behind our computer screens, it's all too easy to allow differences of opinion to become fully-fledged fights.

But, luckily, there seems to be one thing that we can all agree on.

Dogs. Honestly, dogs are one of the simplest joys on Earth - and no one can really disagree.

For one thing, dogs are exceptionally cute.

And to make them even cuter? There's a dog for everyone. Big ones, small ones, sleek ones, fluffy ones - the possibilities are truly endless.

But dogs are more than just a pretty face.

They're also surprisingly smart animals. What other species could you teach to dance, high-five, and even read human emotions? Truly, the mind boggles.

But a dog's intelligence really requires no human interference.

They sometimes do amazing things that seem to prove that they can actually think for themselves. And this story is one shining example of this phenomenon.

Here's the dog in question.

Known as Gae, it seems like he's a stray, relying on the kindness of strangers to get by. And, in the interest of greater returns, he's done something pretty smart.

The capital of Thailand relies predominantly on the tourism industry to boost its economy. And Gae is equally reliant on tourism.

But, for Gae, things can get a little tricky.

There are tons of stray dogs for tourists to enjoy in Bangkok. In order to stand out from the crowd, as any marketing enthusiast will know, Gae needed a USP.

It's not just treats that Gae needs.

He's also reliant on these tourists for another doggy need - attention. And, eager to make sure that he earns his fair share, he had to come up with a plan.

So Gae came up with an innovative solution.

It's equal parts ingenious and incredibly sneaky - but the internet is suitably impressed with this doggy-ingenuity.

Gae pretends to be injured to gain attention and affection.

Bangkok resident, Thaweeporn Chongplapolkul, told the Daily Mail, 'This old dog has lived my workplace for a few years. He always does this trick to deceive people."

"I feed him rice but he still has this habit."

"He's very smart. I think he does it to get people to feed him. While we stopped to watch him that day, a motorcyclist stops because he thinks the dog is hurt. But then he jumps up and walks away. It's too funny."

And if you're feeling worried about Gae?

"He's an old dog and we've checked both of his legs. They are both fine. If Gae had any kind of injury I would take him to the vets immediately." Phew.

We have to say, it's a pretty clever plan.

And it seems to be working pretty well for Gae - so hats off to him. Dogs outsmarting humans will never not be funny.

The moment when Gae snaps out of character is almost like a Hollywood twist. Keyser Söze, anyone? Fancy more wholesome dog content? This Canadian team of service dogs had a pretty unique method of training.