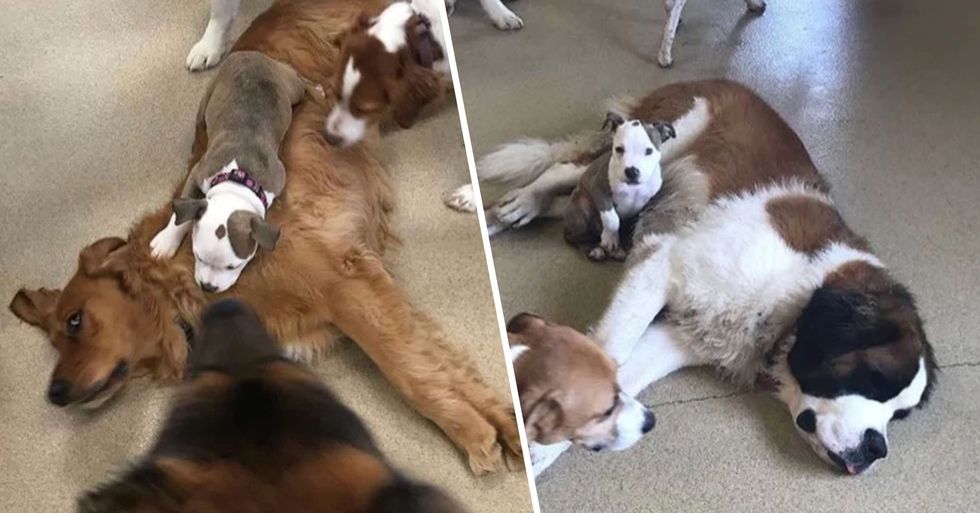 Dogs are truly one of the most precious animals on our planet.

Our faithful companions are simply the cutest things, and one little pup has recently captured hearts at her daycare by napping on the fluffiest dogs that she can find.

Keep scrolling to check out this unbelievable cuteness...

And one little pup is now the centre of attention on Instagram because of her need to nap.

Brianna Gottfried, who lives in Michigan, is the proud owner to her own pack of pups...

And her most recent addition is little Edna.

Edna is only young...

And ever since she was a little pup, she has been attending doggy daycare.

Doggy daycare is a great way to help puppies socialize with other dogs...

And it also helps with their growing obedience and behaviors.

Edna has been attending daycare for quite some time now.

In the first hour, she will run around and burn off a lot of energy... meaning she is usually left in urgent need of a nap afterward.

She enjoys napping on or against the fluffiest dog that she can find.

Edna isn't fussy over what type of dog she picks...

As long as they are warm and fluffy, she is happy.

The other dogs don't seem to mind Edna using them as a make-shift bed either!

All of the dogs at the daycare lay placidly while the little pup grabs them essential few minutes of sleep.

It is the cutest sight to see...

"All the dogs seem to enjoy the snuggling company," Brianna told The Dodo. "Even the tiny wiener dogs."

When Edna was a puppy...

It was a lot easier for her to take naps on the other dogs.

But now that she is growing to be a lot bigger...

It has been made slightly more difficult... but this hasn't stopped the little pup!

Which, at the end of the day, is all that matters!

If you think this is cute...

Keep scrolling have a look at the beautiful "Fox Dogs" - a Pomeranian-Husky mix breed...