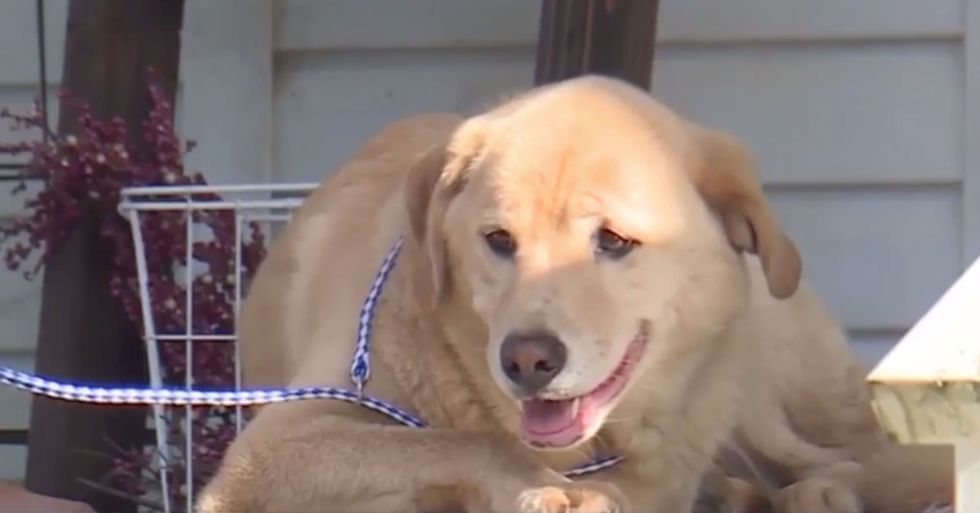 A dog embarked on a fifty-seven-mile walk to get back to the old home that her family had moved away from 2 years ago.

This is truly a remarkable story, and the video is simply adorable...

Out of all the pets out there, it is our dogs who reign supreme.

It's no secret that dogs are the nation's favorite pet - They're cute, they're loving, and, most importantly, they're loyal.

There is nothing else quite like the loyalty of a dog...

And we all know that our pooches would, quite literally, walk to the ends of the earth for us.

But, with this loyalty, comes one major issue.

As pack-oriented animals, dogs are happier and more content as part of the household "pack" and can become distressed and, sometimes even depressed, when left alone for long periods of time.

Now, we would all love to spend every dying moment with our dogs, I'm sure.

But, with jobs and other commitments, this is sadly just not possible for the majority of us.

So, as a result, our dogs have to be left at home alone.

Granted, a couple of hours of alone time won't do our pooches much harm. But, sadly, there are many dogs out there who are left completely alone in the house all day long.

Dogs are social animals, and they form strong attachments with their humans...

Studies have even found that dogs don’t just tolerate human presence; they actively seek it out. So, it’s safe to say that these animals need social closeness with humans, and deprivation of this contact poses welfare concerns.

But its not just us humans that dogs grow incredibly attached to...

They are known to settle into their family homes very quickly.

And when a dog spends the majority of its life in a house?

If it ever comes to leaving, this can be extremely difficult for an unknowing pooch.

But families move houses all the time and that means their dogs will have to go with them... whether they like it or not.

Well, one determined labrador recently decided to go back to her proper home after her family moved house...

And she walked a staggering fifty-seven miles to get to her desired location.

And the adorable labrador is 4-years-old.

Cleo recently appeared on the porch of Colton and Britney Michael, who live in Lawson, Missouri.

The couple, who moved into their home in 2018, had no idea whose dog she was and they were stunned when they arrived home one day to see Cleo comfortably relaxing on their porch.

Cleo seemed wary of the couple at first...

"She wouldn’t let us quite come near her," Colton said to KMBC.

The couple took Cleo to a vet and learned that she had a microchip...

And this is when they made the remarkable discovery that Cleo belonged to a family who used to live in their home.

When Colton called the dog’s family, they were in disbelief. "It’s the most bizarre story," Cleo’s owner, Drew, said.

And they were stunned to learn she had walked more than fifty-seven miles from Olath, Missouri, to get to her old home.

No one knows how Cleo quite made this shocking journey...

But she was completely unharmed... apart from being very hungry, of course!

We will never know...

"It’s a mystery, something we will probably never know," Colton said. "Now that we know who she belongs to, if she pops up again, we know who to call."

We're just thankful that Cleo is alive and well...

And she is finally back home where she belongs. Keep on reading to learn about how a woman with a terrible fear of dogs got over her phobia...
20%