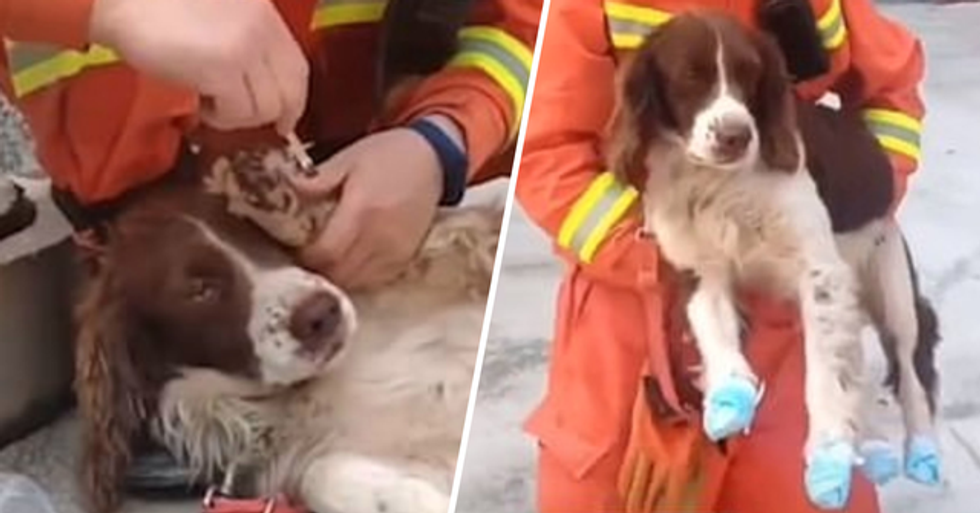 Dogs are smarter than we ever give them credit for - but one particular pooch has absolutely wowed the internet this week with their ingenuity. BeiBei the rescue dog proved itself to be a real hero when they rescued 6 trapped patients in the collapsed coronavirus hotel the Fujian Province of southeastern China.  Read on for the incredible story.

And their story is just adorable.

They are exactly who you want around in times of crisis.

They seem to have an almost innate need to help out their owners in times of need.

After one horrific accident one pooch went above and beyond to look out for human life.

The world is currently in the midst of a medical crisis.

Coronavirus, or COVID-19, is spreading quickly and many are very concerned.

Hospitals are under huge strain.

But one hospital, in particular, has suffered a massive tragedy.

The Xinjia Hotel in Quanzhou city, in China's eastern Fujian province, has collapsed.

It fell on March 7th, trapping many of the quarantined patients inside.

The emergency services have been working tirelessly on a rescue mission.

But there's one hero who has been the real star of the show.

The English Springer Spaniel has proven itself to be the exact kind of pooch you'd want around in an emergency.

It was among the first to arrive on the scene on Friday.

And Bei Bei worked non stop for 3 days to do the best she could.

After 3 days, Bei Bei had to stop working.

Its paws were totally cut up from the broken glass of the collapsed building.

But Bei Bei's work was impressive.

The dog managed to rescue 6 people from the wreckage, including 3 in the first few minutes of their search.

The rescue operation was no joke.

"The surroundings were extremely rough. There were sharp iron pieces and broken glasses everywhere," Mr Yi told The Beijing News.

"Yesterday afternoon we noticed that Bei Bei was moving more slowly and found cuts on all of its paws." Bei Bei is now receiving treatment for these injuries.

Sixty-two people have now been rescued from the building.

Twenty have been confirmed to have died in the accident, while nine remain trapped.

The search is ongoing with at least 9 dogs on the scene.

But it's unlikely any will top Bei Bei in the hero stakes.

What a true superstar.

Want to learn more about Coronavirus? Scroll on for the biggest news in potential treatment for the disease...