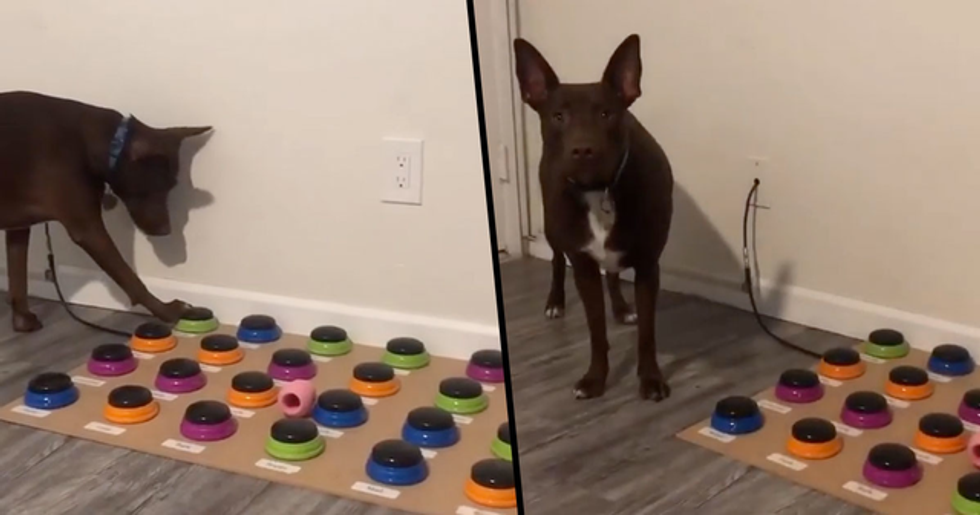 Ladies and gentlemen, the impossible has happened: A dog has learned how to speak.

Christina Hunger, who lives and works as a speech and language pathologist in San Diego, has imparted her language wisdom upon her dog, Stella. Though the pooch still doesn't have the ability to actually speak, she is able to communicate her thoughts, feelings, and wants through a special soundboard. Whenever the canine wants something, like a walk, or a simple belly-scratch, all she needs to do is press her paw onto the correct button with the appropriate word.

And, remarkably, she has learned every word on her soundboard, and can even string sentences together.

What a good girl.

Keep scrolling for the full story, and to hear just how Christine and Stella have accomplished such a remarkable task.

We've always wondered what our dogs would say if they could talk to us.

Would they declare their undying love for us? Would they thank us for consistently providing a warm and loving home for them? Or would they just ask us for food?

Sadly, we may never find out the answer.

Because, despite their intelligence, dogs simply don't possess the biology to be able to speak in languages as we do.

Dogs have come up with their own unique ways of telling us what they want.

Whether it be rolling over for a belly rub...

Or barking incessantly until they get what they want, dogs have acquired their own quirky ways of communicating with their human companions over the years.

However, some people believe that dogs are more intelligent than we give them credit for...

And have faith that they are able to communicate with us in a much more effective manner than simply barking or wagging their tails.

And now, one woman may have cracked this mysterious canine code.

Christina is a speech and language pathologist...

And she has used her expertise to teach Stella, who is a Catahoula/Blue Heeler mix, how to communicate using actual, human words.

But she has given her the ability to communicate her thoughts and feelings through a nifty little soundboard.

Christine began teaching Stella words when she was only 8-weeks-old.

And now, at eighteen-months-old, the canine has memorized twenty-nine different words and is able to use them effectively.

But how does she do it if she can't physically speak?

Stella uses her paws to push on her desired word.

Stella can even combine a handful of her learned words...

And, by doing so, creates short phrases and sentences.

Christina can't get over her pup's language ability.

“I’m in constant amazement and shock," she told PEOPLE. “Every day she says something cooler than she said the day before."

Christine has been documenting Stella's progress...

On her blog, Hunger For Words, the proud owner posts regular updates on Stella's speech and language journey.

And Stella is progressing in leaps and bounds...

“The way she uses words to communicate and the words she’s combining is really similar to a 2-year-old child," Christina explained.

And because of her soundboard...

Stella has been able to tell Christina important information, including when she’s tired and wants a nap, when she’s hungry and wants to be fed, and when she wants to go outside – specifically to the park.

Christina recalled a special moment in which Stella was able to communicate her exact thoughts.

One day, while waiting for Christina's fiance, Jake, to arrive home, Stella was sat whining at the door.

Normally, this would be a signal to be let outside.

But, incredibly, Stella used her soundboard to spell out the words "want," "Jake," and "come."

She then continued to wait at the door...

And when her beloved Jake finally arrived home, she went back to her soundboard and pressed on the "happy" button. She then rolled over for a much-deserved belly rub.

But, the one question we've all been dying to ask...

Which words are Stella’s favourites?

You may be surprised...

But they're pretty obvious. "Walk" is a firm favorite, with Christina explaining "I didn’t realize how much she was waiting to say it." "Beach" is another popular word of choice for the pooch. Christina plans to continue teaching Stella more and more words and wants to teach other dogs how to speak so they too can communicate with their owners.