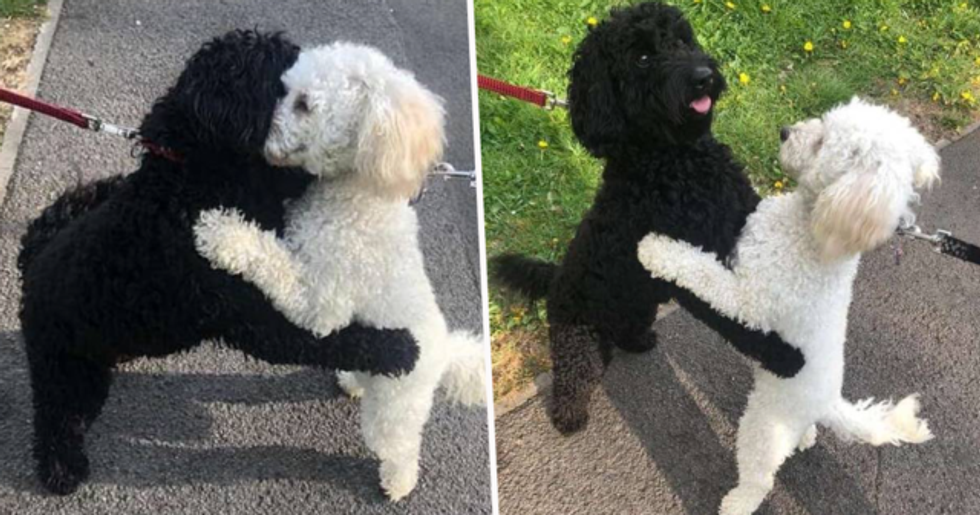 A pair of dogs from the same litter reunited in a park, and they had the most adorable reaction.

Keep scrolling for the full story on these pups, and to see their heartwarming reunion for yourselves...

But now, there is one set of dogs in particular that have captured the heart of the internet.

2 cockapoos have gone viral for their heartwarming reunion after being separated as puppies.

Unlike humans, dogs tend to give birth to quite large quantities of young.

And this results in some seriously adorable litters.

Most of us will agree that litters of puppies are by far the cutest things on this planet.

But most puppies are separated from their siblings at around 8 weeks old.

For centuries, puppies have been sold and adopted individually.

Adopting vast quantities of puppies at a time is simply impossible for most of us.

So most puppies are sent out into the big world without the comfort of their siblings...

And, while they can easily adapt to this change, their bond with the other pups from the litter will always remain.

And this brings us back to our story.

Cockapoos, Rosie and Monty, were born into the same litter last June.

As puppies, they were inseparable.

"There were 6 of them," Susan Killip, Rosie's mom, told The Dodo. "But Monty and Rosie were always together."

But, as soon as they were of age, Rosie was adopted by Susan...

While Monty was adopted by one of Susan's friends, who lives in a nearby village.

It's been ten months since the pups were adopted...

So their owners decided to organize a surprise reunion in a local park.

And it was the most amazing moment.

As soon as they walked up, the dogs instantly recognized each other, and immediately leaped into an adorable embrace.

It is the most heartwarming thing.

"It was so lovely, they both just jumped up and hugged each other," Susan said. "It was amazing they remembered each other after 10 months of not seeing each other."

The dogs' adorable story went viral after it was shared onto Twitter...

Libby Pincher's dad had been at the park where the reunion took place, and he had texted his daughter a photo of the moment, explaining, "So, Dave was out walking his dog, and there was a couple walking towards him with a white version of his dog. Turns out they are brother and sister from the same litter. But instead of just playing like they do with other dogs, look at this."

And it encouraged others to share photos of their own dogs hugging their pals.

This is the Twitter thread we've all been waiting for...

My day has suddenly got significantly better, what about yours?

This has simply solidified the fact that dogs are the cutest animals out there...

And wait until you see the insanely adorable pomeranian and husky mix... You may just die.
40%