Dog Monopoly Lets You Buy Dogs Instead Of Property | 22 Words 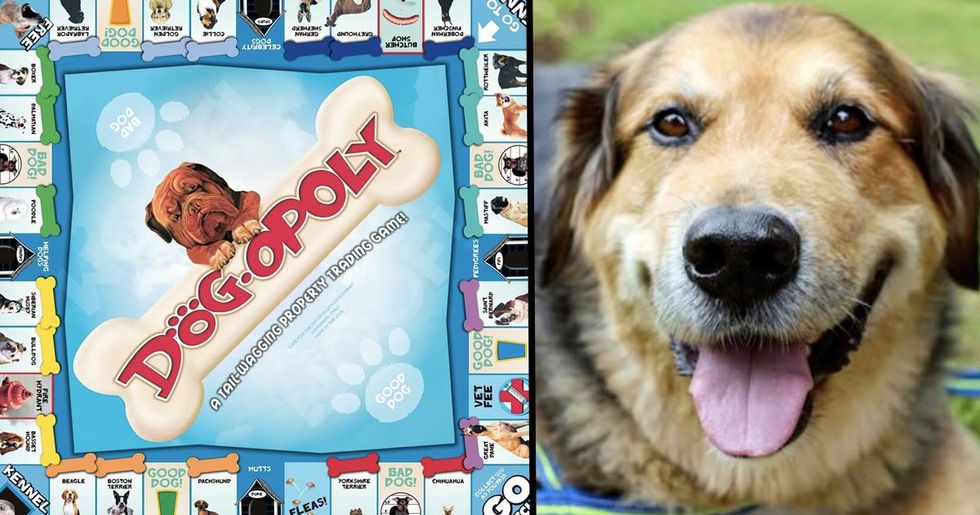 Dog Monopoly Lets You Buy Dogs Instead Of Property

Monopoly is a manifestation of capitalism, and inherently immoral. But you throw dogs into the equation, and that's something anybody can get behind. If you're fighting for property so you can undermine the other player's and force them into bankruptcy, then take a long hard look at yourself. If you're buying doggos, then we're gonna get along.

Have you ever seen something so beautiful?

I mean, just look at that thing. Have you ever seen so many good boys on one board game? How can you not want to spend all your money on this?

These good boys absolutely understand what all the fuss is about. In fact, they look quite angry they can't play the game right now. And they should be angry.

Look how in to it he is!

This lil fella is so invested in playing he's all over the board, we've all been there to be honest.

Those glasses make for a serious gamer.

Available on Amazon, Dog Opoly ‘celebrates our four-legged friends’ and is ‘a tail wagging good time’ – well that sold me harder than the last time someone pretended to throw a stick.

The concept of the game is simple, instead of buying places, you buy dogs. Who hasn't fantasised about buying their own dog, right?

That feeling when you're losing at Dogopoly...

Don't end up like this guy, he doesn't look pawticularly happy. Perhaps he could learn some tips from his frens.

This doggo doesn't look happy, and he's not playing...

This little thing should be playing Dogopoly.

"What about the pieces?" I hear you ask. Well, they have a canine theme too, obviously, including the option for players to move around the board as such doggy favourites as a scared cat, a food bowl, a postman or a fire hydrant.

Some super fun for all the family

But Dogopoly isn't the only type of Monopoly with a twist, oh no. You can also be the proud owner of The Incredibles 2 Monopoly. I still haven't seen it so I can't really say much else here.

Even more exciting is the official Disney Monopoly, replete with all your favourite locations from classic Disney movies. Perfect little stocking filler, this one.

Somehow this is more appealing to me than the Dogopoly, but I'm not entirely sure. As long as the oil lamp from Alladin is in it as a piece I don't care.

Oh look, there it is. It's almost like I looked ahead and saw the Alladin oil lamp in this image to give myself something to write about in the last slide...

For all you hip and trendy kids out there.

So apparently Fortnite is taking over the world so we may as well just let it happen and accept it. Sooner or later Fortnite is going to be available at every waking moment, so just accept it bucko.

Who doesn't cheat at Monopoly?

Remember what I said at the beginning, about Monopoly being inherently immoral based on capitalistic idealisation? Yeah? Sweet, well here's another example of that. Cheater's Monopoly, in which you're encouraged to cheat and lie over your friends to get ahead in the game.

Shh, don't tell anyone you're cheating

A recent study conducted by Hasbro revealed nearly half of game players attempt to cheat during Monopoly games, so in 2018, we decided it was time to give fans what they’ve been craving all along – a Monopoly game that actually encourages cheating.

As well as the standard Community Chest and Chance cards, the Cheater’s Edition will also come with 15 cheat cards.

They're really not horsing around, huh?

If you're not the biggest fan of dogs, or cheating, or Disney, or Incredibles, then you could even get Horsopoly. I shouldn't have to explain the concept at this point. You get it.

The One With The Monopoly Game

That would've been a great ep of Friends wouldn't it? Think about it. We would've watched the group completely disintegrate like every group does when they play Monopoly. It would've been incredible.

If the game reflects anything close to New York real estate prices it'll be a tough one to get started that's for sure.

Think you're a pro? Think again.

Everyone plays Monopoly  every Christmas, so most of us reckon we're pretty good at it by now. Well, according to the UK's Monopoly champion, you're not...

You're starting the game off entirely incorrectly.

At least, that's according to Natalie Fitzsimons, who says you need to do the exact opposite of what you should do in real life: borrow.

Mortgages are the name of the game.

According to Natalie, you need to invest early in the game and start getting houses on as many locations as possible to start pulling in rent. It'll all stem from there.

According to Natalie, it's not worth the investment and the best value for money is three houses on each spot.

Jail can be your friend.

Speaking to Mirror Online, Natalie said: In the early game you want to get out of jail as soon as possible. But once all the property squares have been bought sometimes the best thing is to wait patiently in jail. At the later stages of the game, it's better to be behind bars so you can still collect but don't land on expensive squares.

Master these to really upset your parents this Christmas

We don't advocate upsetting your parents, but think how good it would feel to finally win at Monopoly.

Monopoly has a rich history

Monopoly of the future

In fact, Monopoly is still evolving. Hasbro, who own Monopoly, have just released a futuristic version of the game involving digital banking, essentially making Monopoly a cashless board game. Very 21st century.

There is only actually one real victory in Monopoly

And that's whether you get the piece you want. If you get the thimble, you've already lost. Sorry.

Don't forget, though, that Monopoly truly brings out the worst in us all. Except when there are dogs. Dogs are always good.