Dog Overcomes Anxiety With His Own Emotional Support Dog | 22 Words 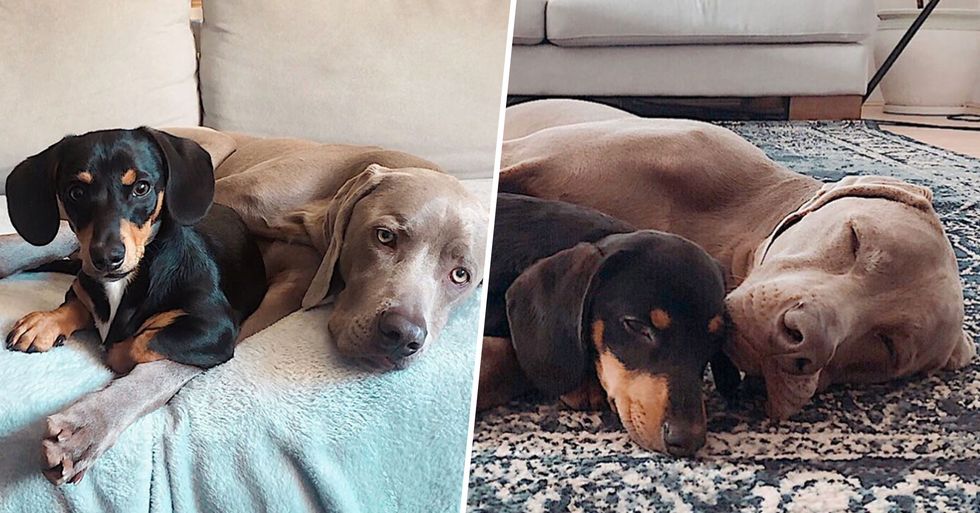 Dog Overcomes Anxiety With His Own Emotional Support Dog

A dog who has been suffering from crippling anxiety since being a puppy has finally overcome his demons thanks to his very own emotional support sausage dog.

Keep on reading for this heartwarming story of unconditional love...

It turns out that dogs need therapy too!

But who'd have thought that a dog could have its own therapy dog?

The story of an anxiety-ridden dog has broken the hearts of the internet...

But since gaining his very own therapy dog, his anxiety has miraculously been overridden. Amazing. The pictures are just too cute to handle.

Now, we all know that dogs are one of the world's most popular pets.

They help us in so many ways...

And dogs are the most popular animals used in therapy thanks to their calming and gentle natures.

But many dogs are often the ones who need therapy.

Those who have suffered neglect, abuse, or trauma usually become withdrawn and experience severe anxiety - which can result in aggressive behavior.

Therapy is just as vital for dogs as it is for people...

And one dog recently overcame his crippling anxiety thanks to his very own therapy dog!

Arnold the Weimaraner lives with his owner Carolyn in Perth, Australia...

And the 2-year-old boy has already experienced quite some trauma in his short life.

When he was just a puppy, Arnold was attacked by a German Shepherd outside of his home.

It was devastating to witness...

And poor Arnold developed the biggest fear of even being walked around the block, never mind socializing and interacting with other dogs.

Carolyn tried many different methods and tactics to try and calm Arnold...

But nothing worked until a little 4-legged friend entered their lives.

Carolyn adopted a friendly miniature dachshund who immediately served as a therapy dog for the nervous Arnold.

Even as a puppy, Frank happily stepped into his role as an emotional therapy dog...

And Arnold was smitten from day 1.

And as Frank grew from a puppy into a dog, they were never seen too far away from one another.

Speaking in an interview, Carolyn explained the unconditional love between Arnold and Frank.

"The bond these two dogs have is just insanely beautiful. They are so connected and loving and supportive of one another," she said.

"If one ever cries, the other one is there in half a second to check they are OK. Their love is unconditional, regardless of their size or breed."

And now, 2 years on from the attack, Arnold's confidence is better than ever.

"Frank has helped Arnold regain his confidence to be able to play and wrestle while learning that this doesn’t always mean he’s going to get hurt or attacked."

It just goes to show what a little TLC from another dog can do...

"Having a little friend to play with has been the perfect therapy for Arnold to heal."

Arnold and Frank never miss a nap together!

For more adorable stories, keep on reading to see a missing dog be finally reunited with its desperately worried owner...