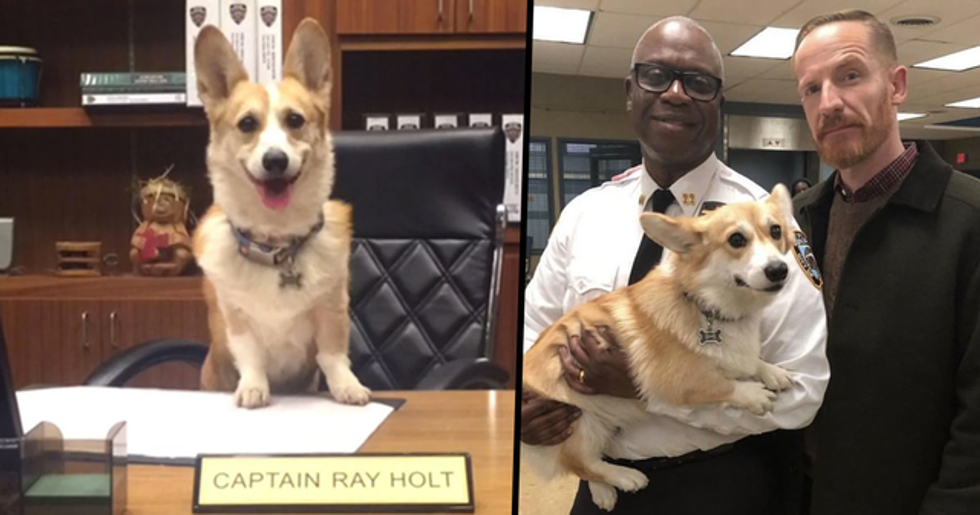 The Dog Who Played Cheddar in 'Brooklyn Nine-Nine' Has Died

It seems like 2019 is cursed with deaths of famous celebrities - but the latest one is really hitting the internet in the feels. Stewart the corgi, an incredibly cute pooch, has sadly been put down following a bout of ill health. You may recognize this cutie from his role as Cheddar in police-sitcom, Brooklyn Nine-Nine. Cheddar was a fan favorite and had many whole episodes based around his doggy-escapades, including the amazing Halloween heists.

While it's sad to see Stewart go, fans can rest assured that his last few days were filled with joy. His owners shared an adorable reflection on his passing on their Instagram - and tributes have also been pouring in.

Brooklyn Nine-Nine has a cult following.

And while there are clearly many reasons for the show's success, one clear stand out is the fact that it stars an incredibly cute dog.

Cheddar, played by Stewart, was absolutely beloved by fans.

Which means that the news that he's gone has hit the fan community pretty hard. Unlike many dog-stars of shows, Cheddar was actually a main character, and integral to many plot points.

One such episode involved Jake and Amy frantically searching for the lost dog.

Cheddar was also a huge part of some of the most popular episodes of Brooklyn Nine-Nine, the Halloween heist specials.

His owners shared a heartfelt goodbye post to their good boy.

Stewart was peacefully put to sleep surrounded by his loved ones. And it sounds like his last few days were truly special, including a trip to the beach and an In-N-Out Burger.

But it's clear that Stewart's (and Cheddar's) memory will live on, and his Brooklyn Nine-Nine legacy is cemented. We must warn you though - only watch this compilation if you're okay with getting a little misty-eyed. Stewart isn't the only celebrity death that's rocked the world this year, keep reading to celebrate the lives of other celebs that we've sadly lost this tear.