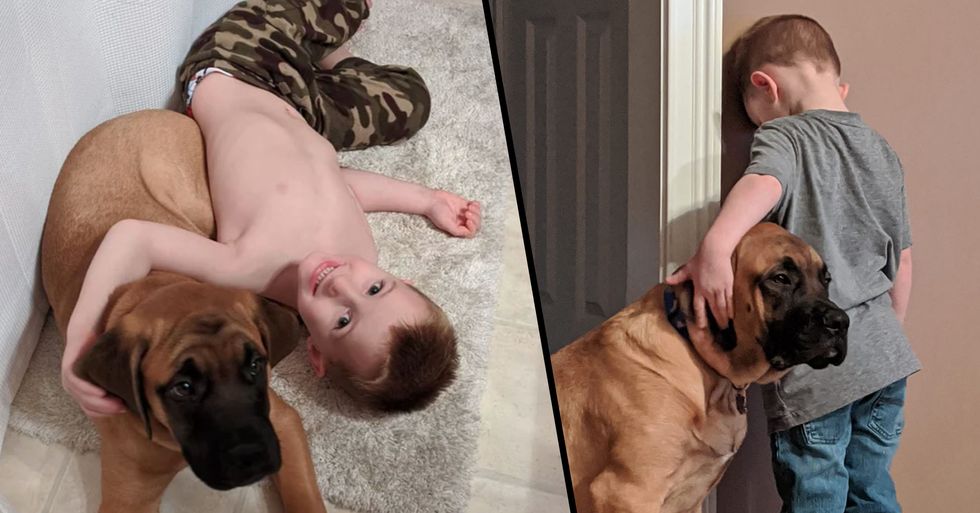 Dog Proves His Loyalty by Keeping Boy Company During Time-Out

From the smallest gesture to putting their lives on the line, you hear some pretty incredible stories about dogs having their humans backs. Keep scrolling to find out about the most loyal pooch and what he did in solidarity of his friendship...

Especially when it comes to children, dogs are known to be protective and will put their lives on the line in order to protect "their human."

Back in 2007, a Doberman-Pinscher saved the life of a seventeen-month-old baby from a venomous snake by pushing the child out of the way and taking the snake bite himself.

Luckily, he was injected with anti-venom and lived to tell the tale of his life-saving actions.

A woman's life was saved when her very own dog stopped her from choking...

She began choking on an apple when her Golden Retriever jumped up and down on her chest until the apple was dislodged and flew out according to the American Society for the Prevention of Cruelty to Animals, who awarded the dog with a commendable mention.

But even when they're not saving lives, they're still always by your side.

Showing that they have your back.

When one three-year-old was sent to 'time out' he wasn't alone, because of course, his best friend joined him.

When toddler, Peyton, got into a fight with his sister, he obviously had to have a punishment.

His mum, Jillian Marie Smith, offered him 2 choices either go to his bedroom or have a 'time out'.

Neither choices were great.

But Peyton decided to pick 'time-out' and marched over to his usual spot.

Beginning his punishment, Peyton faced the wall and put his head against it.

Safe to say it looked like a pretty boring time ahead for Peyton.

That was until his four-legged friend came over to join him.

Within moments his best friend Dash, an English Mastiff was by his side.

Dash sat with Peyton in solidarity whilst he served his punishment.

And luckily for us, despite Peyton's bad behavior, his mum couldn't help taking a picture of the cute moment.

"When your in time-out but your best pal won't let you serve your time alone".

How could you stay mad at that?

Speaking to The Dodo, she explained: "I couldn't be mad long because it was just so cute how Peyton wrapped his arm around Dash. When Peyton had to go to time-out, I think Dash knew he needed his buddy."

Dash has brought a whole lot of happiness to the family.

Jillian said: "Dash has made life happier for the whole family. Most of all, for Peyton. If you ask Peyton, Dash is his buddy."

Being just a toddler this probably won't be the last time that Peyton with ends up in 'time-out'.

But at least he has his best friend at his side for it. For more incredible dog stories, keep scrolling...