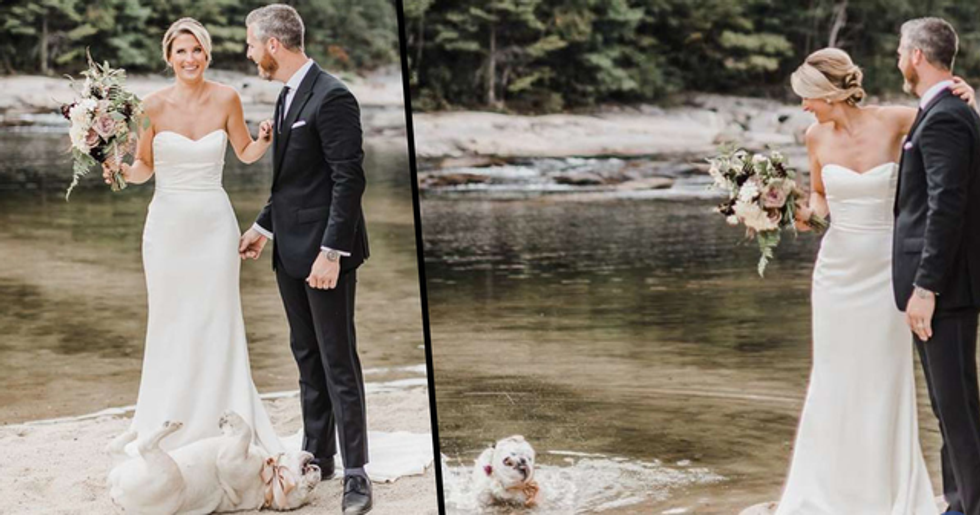 At a wedding, unruly guests can either make or break the event. We all have that one drunken cousin or the slightly offensive uncle who insists on making a speech.

But, when the unruly guest is a dog?

It's unusual because dogs are never unruly. But, when they are, they make for the most adorable photo opportunities.

And one dog completely stole the show at his parent's wedding. The Simpsons, from North Carolina, wanted their pet dog to be a part of their special day. However, he had other ideas when it came to the photoshoot, and decided to instead frolic about in the nearby lake.

Keep scrolling to see the hilarious photos, and to meet the mischevious pup behind the now-viral photoshoot.

Bernie, an English Bulldog, was adopted by Rebecca and Charlie Simpson when he was 2 years old.

Bernie quickly became a member of their little family.

And the couple are very rarely seen without their four-legged son.

So, when they got engaged...

There was no question about Bernie being a part of their big day... despite how messy he can be.

Like most English Bulldogs, Bernie has 2 very distinctive qualities...

His family have noticed that he either spends his time lounging around the house and snoozing...

Or running about with relentless bouts of energy.

There's just no in-between for this pooch.

So, deciding to have him as part of their big day was a risky move...

Because it would one of two ways... Bernie would either be a placid member of the ceremony, or he would wreak havoc.

And, Bernie being Bernie...

He wreaked havoc in the most fantastic way - by photobombing the couple's first photoshoot together as husband and wife.

Their wedding location was beautiful.

The wedding took place at Brown Mountain Beach Resort in North Carolina, and the couple couldn’t have asked for a better location. And, most importantly, photographer, Jillian Knight was there, ready to capture their happy day.

Jillian was there to capture all moments of the day.

From the bride getting ready, to the actual ceremony, and all the way to the evening reception, Jillian documented every moment of their special day.

And, of course, she made sure Bernie wasn't left out.

He makes the most beautiful bridesmaid, doesn't he?

Bernie was invited to take part in their first husband-and-wife photoshoot, and he was relatively well-behaved... to begin with.

And laid out at his parents' feet, eagerly awaiting a belly scratch.

However, his boredom grew and grew...

And he started rolling around in the sand (clearly in protest of the lack of belly rubs).

And, before anyone knew it...

Bernie had had enough, and he took off straight into the direction of the lake. “He actually bolted straight towards us when he saw us and someone had to scoop him up to avoid him covering my gown in sand and water," Simpson told The Dodo. “We asked him to sit, but in typical bulldog fashion he was only focused on what he wanted to do."

He ran straight into the lake.

And, much to his parents' amusement, he contently frolicked in the water. Though they weren't the only ones watching his antics. “We didn’t realize it at the time but all 120 guests were on the deck watching, and when he got in the water everyone just burst out laughing," Simpson recalled.

Jillian encouraged the couple to continue with the photoshoot...

So they obliged and posed for a cute kissing shot... all with Bernie plonked in the water directly behind them. “Our photographer Jill was amazing — she saw the opportunity and vision for these pictures and told us just to keep laughing and posing while he was in the background doing his own thing," Simpson said. “And [the photos] turned out better than we could have dreamed!"

But Bernie decided to crank the photobomb up to a new level...

By beautifully shaking himself dry. What. A. Shot.

I also love how his flower necklace has stayed perfectly intact throughout his mischevious antics.

Bernie really is a supermodel in his own right.

Just look at the way he's working that camera!

Bernie was the heart and soul of the party.

And the Simpsons will always remember the special day in which their own dog gatecrashed their wedding.