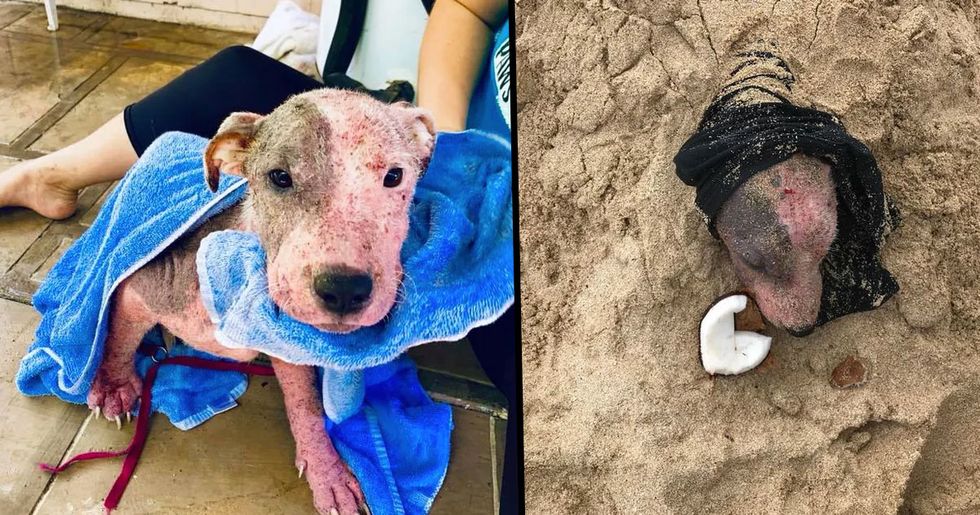 It saddens me deeply that I still find myself having to report on such horrific stories, but, despite us living in 2019, unimaginable acts of animal cruelty still somehow happen all around the world.

One would have thought that, in this day and age, human beings could be decent enough to not inflict suffering and pain on our animal friends - but nope.

Last week, a dog was discovered on a beach in Hawaii and what she had gone through was unimaginable.

Keep scrolling to learn about this poor pup's story, and how the kind acts of certain individuals ultimately saved her life...

But animal abuse and neglect have long been a problem here in the States. Thousands of animals suffer and lose their lives at the hands of careless and ignorant individuals, and it pains me truly to be writing this story.

A fresh start for the unfortunate pets.

PAWS of Hawaii is a prime example.

This organization is a non-profit animal rescue on the Hawaiian island of O'ahu. PAWS works primarily in the homeless areas of O'ahu, prioritizing the care of animals in need in that area.

A member of the PAWS team stumbled across the dog while walking along a west O'ahu beach. The poor dog, who is believed to be a pit bull mix, had been buried alive in the sand and the culprit was nowhere to be found.

The dog was absolutely terrified.

The dog, whom the shelter named Leialoha (beloved child), was swollen, severely dehydrated, covered in sores, and was missing ninety percent of her fur.

The person who did this to Leialoha seemed to be in possession of a machete and is presumed to be her previous owner. She had a deep cut on her leg, which is assumed to be from the machete. PAWS wrote on their facebook page: "Someone had just buried her and they had a machete so who knows what was next."

Executive Director, Ku'ulei Durand, spoke to KITV and claimed that her previous owner felt that the dog's ailments were "too much to handle." "It seems like he felt like he was ending her suffering by trying to ending her life instead of getting her the help that she needed."

Leialoha was immediately rushed to the veterinary clinic.

She was given vital fluids, medicine, and blood tests. She was also gently bathed; the sunburn that the poor animal must have obtained is heartbreaking. PAWS wrote that her first bath caused her to "bleed from every inch of her body."

A local vet shared her insight into what Leialoha had gone through.

Dr. Kelly Dowdall-Garberson said to KITV: "She had multiple scabs and lesions, she was very dehydrated, very painful, and she had very very swollen limbs and extremities - that's a sign of very chronic inflammation and just very poor care."

She is now eating again and is slowly regaining her health...

PAWS wrote: "Now she is back at home enjoying her burgers from Raw Dog Hawaii."

Leialoha has been fostered.

She has been taken in by a loving foster family who will care for her while she slowly heals from this traumatic incident. What Leialoha has gone through is unimaginable; she must have suffered,  not only physically, but emotionally, too.

This is why the kindness of strangers is needed more than ever.

Adopting a dog, rather than buying a puppy, can help to save so many lives. Leialoha's new foster mom, who has been identified as Amanda on Facebook, is no stranger to fostering dogs and has stepped in to help PAWS with many abandoned animals in the past.

All she needs is a little TLC.

"My heart was broken and I knew she needed us to foster her," Amanda wrote on Facebook. "A little TLC has gone a long way to help Leialoha."

“Leialoha has come so far since Tuesday night," she wrote on Saturday. “Initially, she would only leave her kennel to go to the bathroom. Last night, she came out, while we had friends over to see what was for dinner and has been liking being under the coffee table."

It appears that Leialoha is on the slow road to recovery.

PAWS gave an update on Leialoha on their Instagram account, which shows the pooch slowly wagging her tail and picking up some confidence. She will be put up for adoption once her health improves in a few months, and it is hoped that her fur will begin to grow back too. Doesn't it just go to show what a little human kindness can do for animals that are truly in need of it?

A warning to viewers: some may find this content upsetting.