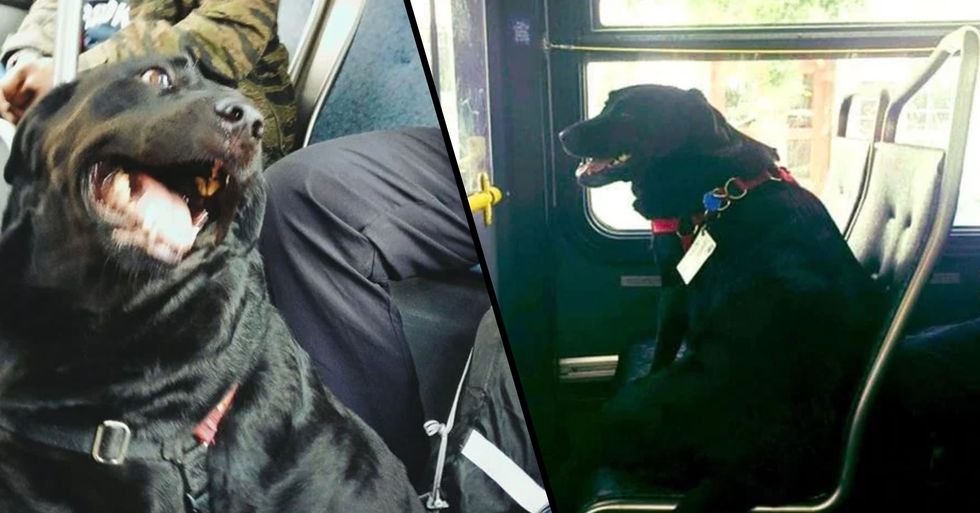 Dogs are smarter than we ever give them credit for - but one particular pooch has absolutely wowed the internet this week with their independent spirit. Eclipse, a labrador and mastiff cross, proves she needs no human - by taking herself to the dog park every day.

Read on for her adorable story...

And her story is just adorable.

They love basically nothing more than going for a walk.

And, even better than a walk?

A walk to the dog park - where your pooch can hang out with all of their best pals.

But what if you can't make it out with your dog?

Well, then they might be forced to take matters into their own hands.

This labrador mastiff cross is taking the internet by storm thanks to her cute solo adventures.

Why? Well, because she rides the bus, of course!

"Every day she leaves her house, by herself."

" She even has her own bus pass attached to the collar."

"It started when her owner, Jeff Young, was taking too long when the bus arrived, so she impatiently ran ahead and got on the bus by herself."

"The bus driver recognized her and dropped her off at the dog park, and later Jeff caught up with her."

"After several more trips by herself, Jeff started letting her go on her own, and she always comes back home a couple of hours later."

"All of the bus drivers know her."

"She makes them smile, and many of the regular passengers enjoy seeing her every day and will often sit down next to her."

"Even the police have given their approval as long as the bus drivers are okay with the arrangement."

"She makes everybody happy."

What an adorable (and smart) dog!

It's fair to say Eclipse has plenty of fans.

In fact, she has her very own fan page on Facebook.

And she's a community icon.

Hey, there are worse things for a neighborhood to be famous for!

In fact, she's subject to a lot of fan art.

And some suspect that there may even be merch to follow!

But, regardless of her internet fame ...

It's Eclipse's real-life impact that makes all the difference.

Thank the lord for dogs, hey?

Not got your fill of dog content? Scroll on for one who looks just like Seth Rogen.