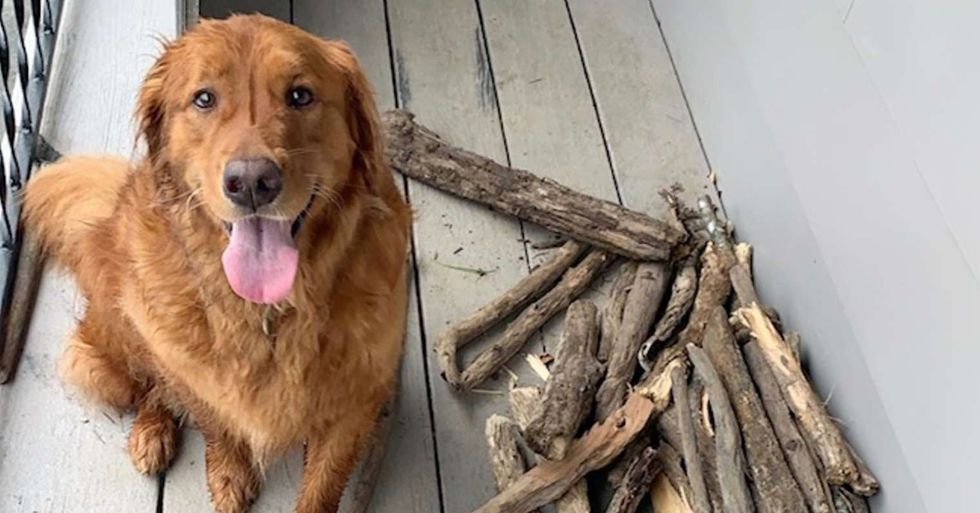 An incredible story of a very talented stick collector has gone viral this week.

The pictures are adorable...

Just when you think you have them figured out, you realize you don't know them at all ...

Why do they do the things they do?

If only we could ask!

And one of the biggest dog mysterious out there?

Their bizarre stick collecting, of course.

But honestly, who really needs to know why?

The point is, it's so dang cute!

And there's one dog out there who puts all the others to shame.

With one of the most impressive stick collections we've ever seen!

Dogs are great for many reasons.

But one who's gone viral this week has one very particular talent...

Owner Leo has a close bond with his dog Bruce.

And we can see why - this dog is cute.

Look at him through the years.

That puppy picture tho!

They love being out in nature together.

It's clear Bruce is one very adventurous boy.

But Bruce has another passion, too.

Bruce actually injured himself on a stick one.

“Despite his injury, his love for sticks was not tarnished, but instead it has only grown into a beautiful collection," Leo told The Dodo.

"He prides himself in collecting sticks of all shapes and sizes from our backyard."

"And he plants them right in front of our front door, checking on them daily when we go in and out of the house."

But this collection hasn't been without drama.

"He has left his favorite stick outside the night it started snowing."

"The next day, Bruce was in an utter panic because he obviously couldn’t find his stick or even see the ground."

"After the snow partially melted, he was able to finally dig around and find his stick. I’ve never seen him more triumphant than that moment."

"I believe he started the collection because he never wants to feel the panic of being stick-less again."

"He just likes to add to his collection and is very proud of it."

Too cute for words.