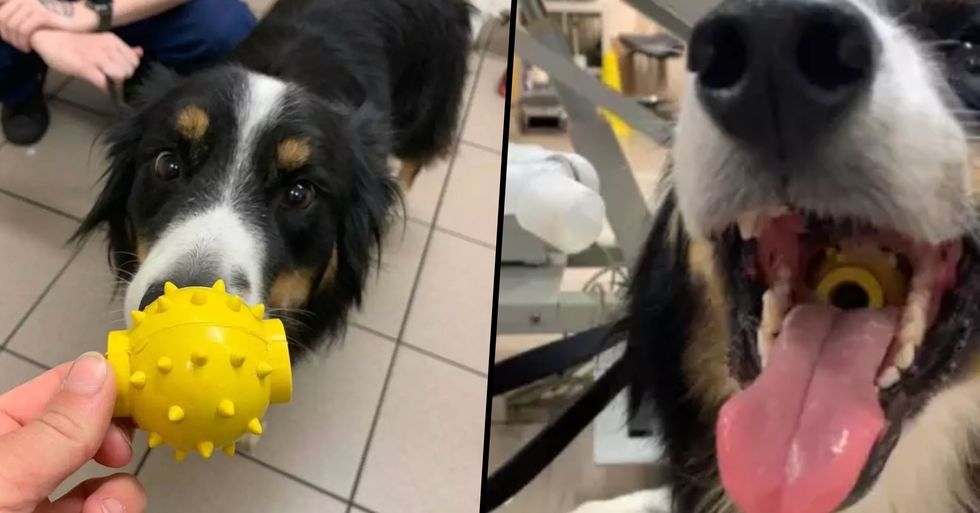 A dog had a massive brush with death after getting a ball lodged in his throat. Luckily, there was one thing that saved him.

The pictures are horrifying...

All pet owners can agree...

Having a furry companion is what makes life complete.

Studies have proven that having a pet significantly lowers stress...

And it also lowers the risk of suffering from high blood pressure or heart conditions.

They can be the key to happiness...

And owning an animal like a dog or a cat can help people win their battle against loneliness - especially elderly people.

And for younger people?

Growing up with a pet cements a life-long bond.

It's true when they say pets are a part of the family...

And especially with dogs, pets are one of the most loyal family members a person can have.

They stand by us through thick and thin...

And a dog never judges... which is probably why they love us so much!

But, there's one pooch who's very lucky to be alive after scary footage emerged online.

Border collie, Scout swallowed a plastic ball that got completely lodged in his throat.

It all started when Scout and his owners returned home from a walk.

"The day it happened everything seemed fine. We were just back from a walk and Scout was playing with the ball in Les's back garden like he had hundreds of times before," Scout's owner, Margaret Hewett, explained.

"Suddenly he started retching and we could see that he was in real distress. The toy was no longer in sight and Les was sure he must have swallowed it."

"I tried to look into Scout's mouth, but he was so upset he wouldn't let me. We knew we needed a vet quickly but it was a Sunday and a lot of places were closed."

The five-year-old dog was extremely distressed.

He was taken to the emergency vets clinic by his owners, where staff evaluated the situation.

Unbelievably, Scout could still breathe despite the toy being lodged in his throat...

Why? Because the ball had a hole in the middle of it. The ball was part of a rope toy, and the hole was where the rope had previously been attached to.

Staff were instantly able to see how serious poor Scout's predicament was.

And got straight to work on saving him.

Scout was given a sedative so vets could carry out a thorough examination.

He was then given an anesthetic so the emergency team could remove the toy.

Removing the ball is a tedious process.

Emergency vet, Sarah Douglass, used a tiny pair of forceps to gently prise the toy out millimeter by millimeter until she could safely remove it.

Scout's larynx was then given an examination...

Luckily, there was no damage other than some slight swelling and inflammation.

Due to coronavirus restrictions, Scout's owners had to anxiously wait outside the clinic in their car.

And were understandably relieved to hear the procedure had gone well. "At the end of it all, they brought Scout back out to us. He was a bit wobbly and obviously very tired but apart from that he was okay."

"We got him home and he just laid down for a long sleep - feeling very sorry for himself."

"As a dog owner and dog lover you just would never know that an innocent-looking toy like that could be so dangerous. "We've had a very lucky escape and Scout definitely won't ever be playing with anything smaller than a tennis ball again."

Want more animal content? Scroll on to check out the most unusual animal friendships that are giving us all the feels...