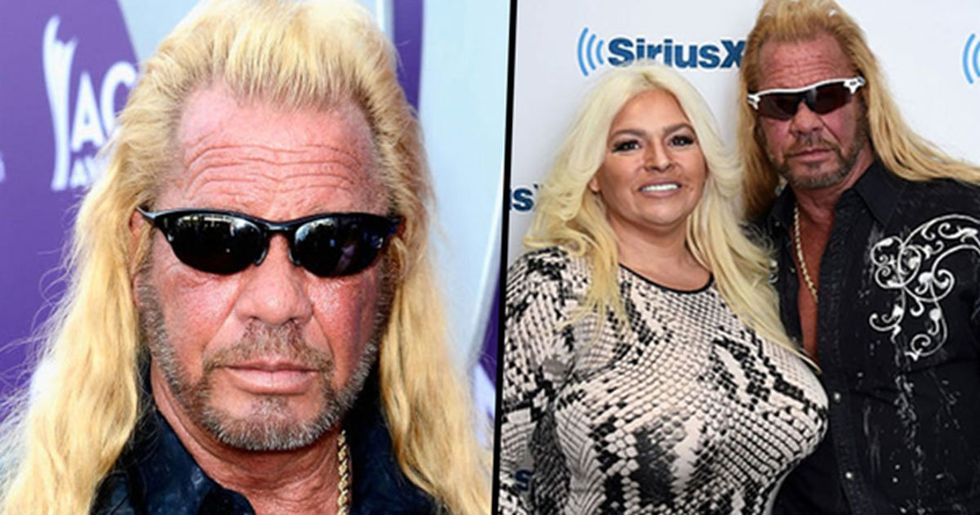 TV Star, Duane "Dog" Chapman, is not having an easy year.

After losing his wife and Bounty Hunter co-star, Beth Chapman, to throat and lung cancer, Dog publicly struggled to cope. It was reported that the burly bounty hunter had lost a staggering seventeen pounds in the two weeks following Beth's death.

Just over a month since Beth's passing, as Dog and the rest of the family are trying to pick themselves up from losing the family's glue, another tragedy has struck. This time, the tragic loss wasn't of a person, but of personal, deeply sentimental items.

Dog The Bounty Hunter's merchandise store in Colorado has been burgled. The store, located in Edgewater, sells merchandise from the various TV shows that Dog and Beth were in together. Not only did the thieves steal thousands of dollars worth of merchandise, they also got away with some very personal items belonging to the late Beth.

Since the news of the burglary hit the media, Dog has made a heartfelt plea for those responsible to come forward and return the treasured items.

The couple's daughter, Bonnie, spoke of her dad's devotion to her deceased mother in an Instagram Q&A. She said: "No one can replace her in his heart. Their love was one of a kind, it made me believe love truly exists."

Dog has thrown himself into work since Beth's passing.

Speaking to RadarOnline, Dog insisted that keeping busy was the only way he was managing to cope. He confessed: "I don't know what to do. As long as I stay bounty hunting it's the only thing that keeps my mind off how things are right now. I just have to keep working!"

Beth and Dog were devoted to bounty hunting.

The duo worked tirelessly to hunt down criminals. They reportedly tracked down over six thousand people over the years, racking up an impressive $4 million dollars in bonds for catching them.

Beth was committed to the TV show until the very end.

In a press release for the latest season of Dog's Most Wanted, a bereaved Dog stated: "Beth wanted nothing more than for the show to go on, and I am so proud of the legacy that she left behind. She lived and died for this show, and she would be so proud of how hard we worked bringing these criminals to justice."

The Bounty Hunter store was a place for fans to buy merchandise.

The Chapmans had all kinds of novelty items available, from t-shirts, to shot glasses, most products emblazoned with Dog and Beth's faces and names.

Beth loved connecting with fans through the merch store.

Whilst battling cancer, she still managed to find time to make filming commitments and manage the Bounty brand. Discussing the merch store in January before her death, she stated: "We just want to give our fans a chance to come down and get a piece of history, get a little piece of the show if they want to."

The family were staying in their Hawaii home leading up to Beth's death.

On staying in Hawaii, Beth had said: "My lungs were very distressed in Colorado because of the altitude … so coming back to sea level did my body good."

Most of the family are now back in Hawaii.

After holding services for Beth both in Hawaii and Colorado, most members of the family have returned to Hawaii. That is, with the exception of Dog.

Since Beth's death, Dog hasn't been able to stay in Hawaii.

Speaking about his struggle to return to the family home in Hawaii, Dog stated last week: "Hawaii is off-limits to my heart at the moment!" Adding, "I'm just taking each day as it comes!"

The burglary couldn't have happened at a worse time.

On Thursday, Dog received a call from one of The Bounty Hunter's team members to let him know that the Colorado store had been completely ransacked. Not only had the assailants got away with thousands of dollars worth of merchandise, but some personal items had also been taken.

The store had a makeshift memorial of Beth's personal items on display.

The memorial had been destroyed and the items were taken.

Beth's hunting gear was amongst the items taken.

Irreplaceable and carrying massive amounts of sentimental value to the Chapman family, Beth's bounty hunting gear was amongst some of the stolen items in the Colorado robbery.

Since hearing about the break-in, fans have poured in to support the family.

Bounty Hunter fans are shocked that someone could do such a thing.

People are being told to keep their eyes peeled for the stolen merch.

People are rallying online to try to hunt down anyone attempting to sell the counterfeit merch - in true bounty hunter style!

Seen anything on eBay?

@TheBlastNews @DogBountyHunter That’s awful!! Keep your eye on eBay Dog! Those items are worth money on there! Peop… https://t.co/qeIJCw79NG
— Michele Marie (@Michele Marie)1564753630.0

Many fans have suggested keeping an eye on e-commerce site, eBay, for the stolen merchandise. Now that the story has become so public, it looks as though it will be difficult for the burglars to shift the goods.

For the family, though, it's the loss of the personal items that hurt most.

Losing your mom or wife is an unimaginable loss, but then, only a month later, having some of her treasured personal items stolen by thieves must have been an incredibly distressing situation for the family.

Beth is no longer around to help catch the criminals...

What would once have presented a novel challenge for the bounty hunting couple - chasing the criminals that robbed them - is no longer a task they can carry out together.

This is one set of criminals that Dog will have to hunt down on his own.

Although, in a statement released today, Dog proved that he does have someone on his side...

Dog has the Lord and his faith to fall back on.

The Bible says it is an unforgivable sin to steal from the dead LARGE CASH REWARD FOR ANY INFORMATION FIR WHO IS… https://t.co/qYxleI8xJJ
— Duane Dog Chapman (@Duane Dog Chapman)1564723385.0

In a tweet posted today, Dog references the bible and offers a large cash reward for information.

Whoever robbed The Bounty Hunter has made a big mistake...

You can bet that Duane "The Bounty Hunter" Chapman will not rest until whoever robbed him of his late wife's personal items and his show's merchandise is found. I sure wouldn't want to be that guy. Dog is clearly heartbroken over the loss of his beautiful wife and the tweet that he posted following her death perfectly summed up the couple's marriage that we all came to love so much. Keep reading if you want to hear the full story of the pair's relationship.