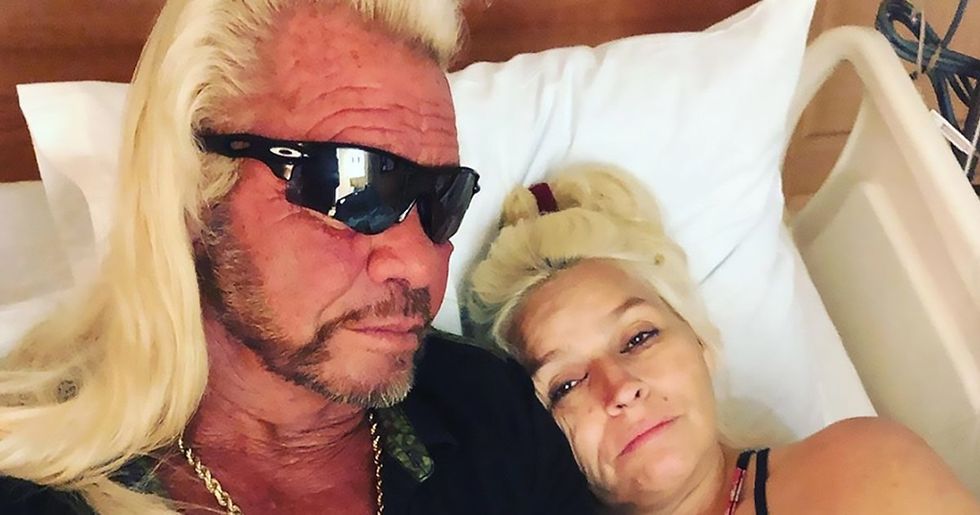 Beth Chapman, television personality and star of A&E's Dog the Bounty Hunter has revealed that she's changing her cancer treatment strategy. Chapman was diagnosed with stage two throat cancer in 2017. Stage two cancer typically means that although the cancer is growing, it hasn't moved to any nearby areas other than perhaps some localized lymph nodes.

Which is just a very jargony way of saying that the cancerous cells haven't spread far, but could begin spreading soon. She discovered her tumor before it could get truly out of control, thankfully. But, and anyone who has gone through cancer treatments or had a loved one go through something similar can tell you, cancer never truly ever goes away.

After a diagnosis and even the full removal of a tumor, survivors return to their doctors for scans every few months to make sure everything is looking a-okay. Unfortunately, Chapman was one of the unluckier ones.

Chapman went under the knife to remove her tumor in 2017.

We don't know how invasive this surgery was, but by all accounts, it was very successful.

After the surgery, she declared herself cancer free.

Which was probably true for the time being. Unfortunately, if there's one thing cancer is good at, it's spreading.

According to People Magazine, In November of last year, she had to have another emergency surgery.

At first, it was hard to say what was going on, but people speculated it might be related to her cancer.

She was rushed to the hospital after experiencing a blockage in her throat.

This would be her second throat surgery in the span of 14 months.

The blockage was removed, and doctors confirmed that it was in fact related to her cancer.

Less than a month later, she returned home from Los Angeles to Colorado, against her doctor's wishes.

Doctors wanted her to remain in the hospital while they waited on vital test results.

Dog said, "cancer follows the path of least resistance, so it goes downward. Half of her lung was full of water, but she’s much more comfortable now [that] she can breathe.

He continued, saying, "she just wanted to come back to Colorado, she loves it here."

“She had a lump in her throat twice the size of last time, and they performed an emergency surgery yesterday."

“They cut a hole in her throat so she can breathe; she can still talk. … [She’s] doing the best she can and remains incredibly strong."

"The [treatments] are going well, but they certainly take their toll on Beth," the source says. "She's a trooper though and a very tough lady."

Beth was again rushed to the hospital in April for similar reasons as before.

She experienced another blockage in her throat and had to have it removed.

Chapman isn't a stranger to alternative treatment methods, either.

Back in February, she posted this photo to Instagram with the caption, "The real medicine behind the plant is very interesting the healing qualities are vast. We need to all be far more open minded to new treatments. Israel is leading the world in these studies. We no longer need to poison patients to get them well ."

CBD and THC have been treatment supplements to many cancer patients.

They can help suppress the side effects of nausea and pain that come with chemotherapy treatment.

According to People, on Mother's Day, Chapman announced she would be ending her chemo treatment.

She addressed a crowd of churchgoers at the Source Church in Bradenton, Florida.

Beth admitted her diagnosis has been “the ultimate test of faith."

She stood in front of the congregation and talked about her struggles with cancer.

“He’ll roll his eyes at me again because I know why — because this is the ultimate test of faith. It is the evidence of things hoped for and it is the substance of things not known."

She followed up her conversation of faith by announcing she would no longer continue with chemo.

Or at least, that's what she alluded to.

“Chemotherapy is not my bag, people. Sorry, that’s not for me."

“So for me, this is the ultimate test of faith. This is my ultimate lesson. And it will either be taught to me or to you. And I am fine with taking the hit for everyone else. Because I think I know another guy who did the same thing," she said, referring to Jesus.

Beth now hopes that her prayers will be answered and God will cure her cancer.

It's easy to dismiss this talk as hopeful at best, but a lot of cancer patients turn to faith and/or alternative medicine when it looks like chemo and radiation treatments have failed them.

Chapman must have felt immense frustration after being declared cancer-free in 2017.

Only to have her cancer come back, her chemo to not work, and undergo two emergency surgeries just two years later.

Even so, I personally feel like I should urge anyone with cancer who reads this article not to abandon your treatment.

Cancer is something that has affected me personally. I lost my dad to cancer in 2013.

He too turned to faith when everything felt hopeless -- but he never abandoned his treatment.

I'll never know how many days he gained thanks to the hard work of his doctors, but those days were invaluable to me and my family.

Cancer can break your spirit. Sometimes it feels like there's nothing left to do than to scream and plead and beg.

My dad was apart of some experimental treatment programs. Ultimately those treatments didn't do enough to save his life, but I can only hope that whatever was learned from his treatment can be used to save other lives in the future.

The support from Chapman's fans and family have been powerful.

The prayers have not stopped from her fans.

In fact, most of her fans are on board with her new strategy.

Although I suppose what more can you do as a fan?

Really, we all just hope her and her family can be well.

It's a tough time for anyone going through this.

Support from her fans will definitely help.

Every little bit of motivation can be huge when you're battling a disease like this.

And her fans know how tough she is.

If you've ever seen an episode of Dog the Bounty Hunter, you know these guys are the real deal.

And you also probably know how important their faith is to them.

So it's nice to see her fans standing by her even though some people (including myself) think she's making the wrong decision.

Everyone needs to make a decision that works for them, and sometimes treatment isn't the right path.

I just hope her hail mary (no pun intended) pays off, and she's able to recover.

Is she making a bad move? Or is it really all she has left? Feel free to leave your support for her in the comments!