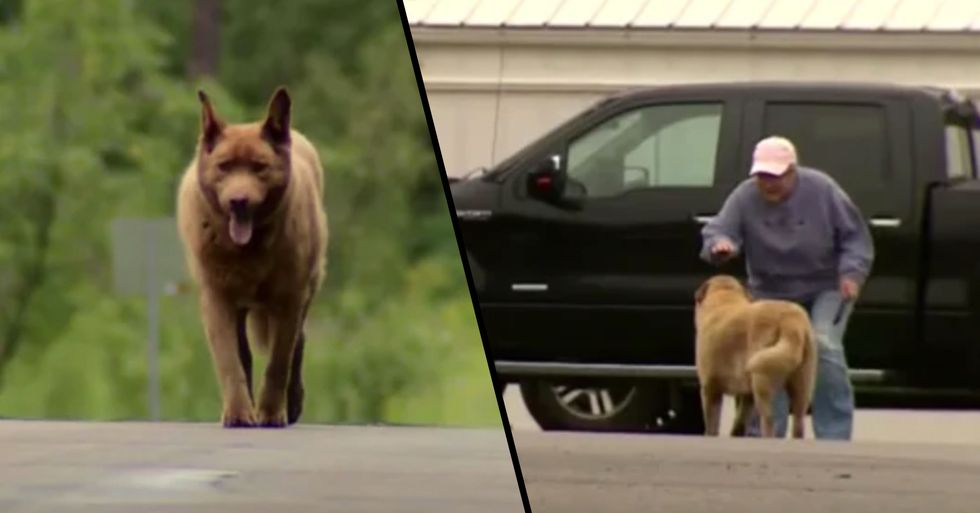 And Bruno the wandering dog is certainly here to prove this. He walks 4 miles every single day just to say hello to everyone in town, so keep scrolling to learn more about this very good boy...

Bruno the wandering dog is a perfect example of this...

Bruno is a Chesapeake-Lab mix and he lives with his owner in Minnesota.

Bruno is around thirteen-years-old and his story began over a decade ago when a man came into Larry LaVallee’s driveway holding a small pup. The passer-by thought the dog belonged to those who lived there and figured it could get lost.

Bruno was simply a stray, however...

But as soon as Larry set eyes on the little pup, he knew he couldn't let him go.

But the one thing that Bruno didn't like was...

Being kept on a leash.

Even when Larry tried to chain him...

Bruno nearly choked himself in a desperate attempt to free himself, so it clearly wasn't meant to be in the collar and leash department.

Bruno would walk himself around the town...

And without fail, he would always return home.

And as the years passed...

The residents of Longville all grew very familiar with Bruno as he passed his way through the town every day.

Bruno has his own little routine for when he takes his walks...

He usually visits the city hall, the library, the ice cream shop, several offices, and grocery stores, where workers greet him with meat scraps.

He walks approximately 4 miles every day...

And this dedication has given him the name of the town's dog and ambassador!

A statue has even been made in Bruno's name...

The wooden statue sits proudly in the Longville town center and we must say, Bruno makes the perfect town ambassador.

Watch the video about Bruno here...

Keep scrolling to check out the dog that looks just like Seth Rogan...