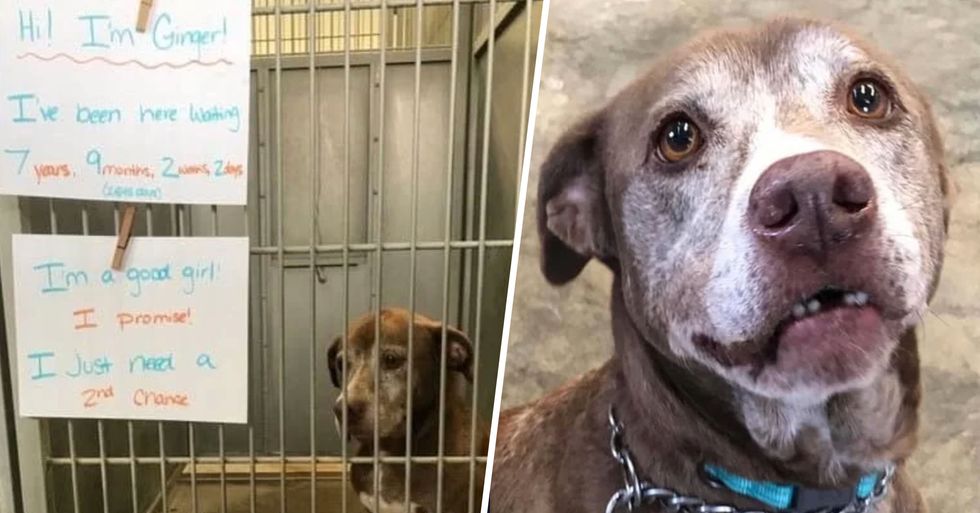 Hundreds of thousands of dogs spend the majority of their lives in and out of shelters and this is not okay.

Of course, each dog comes with its own unique circumstances, and it is often the case that a dog simply needs a second chance to be a part of a family.

Keep scrolling to learn about Ginger who has been waiting for her second chance for 7 years now...

Many dogs spend the majority of their lives in shelters...

And the recent story of a labrador-mix truly demonstrates this problem.

And she is a Labrador-Shar-Pei mix who has been waiting in Dogwood Animal Shelter in Missouri for 7 years now.

She was rescued from an abusive situation...

But while she’s fully trained and a friendly dog, getting Ginger adopted has been tricky because she needs to be the only pet at home and can’t live with small children.

The shelter posted a heartbreaking photo of Ginger on their social media recently...

All dogs deserve a second chance...

And it is utterly devastating that poor Ginger has been waiting 7 years for hers.

The post has now been shared more than 46,000 times and Ginger has received thousands of comments of support.

Mission Driven, who work to raise awareness of shelter pets, were overwhelmed with the love and support.

"Thank you for the outpouring of concern about Ginger. Long term residency for animals in a true no-kill shelter is a problem not unique to Dogwood Animal Shelter," they wrote online.

Thankfully, the shelter will never give up on Ginger.

"The fact that she would be best placed in a home with no other animals or small children has narrowed the possibilities, but we never give up trying," they went on to say.

Whoever adopts Ginger needs to be based in Missouri...

And she’ll need to be matched with someone who can be patient and give her plenty of love and affection as she learns to trust again.

Do you think you could offer Ginger a loving home?

Then click here to be directed to the adoption page. Keep scrolling to learn about the retired military dogs up for adoption...