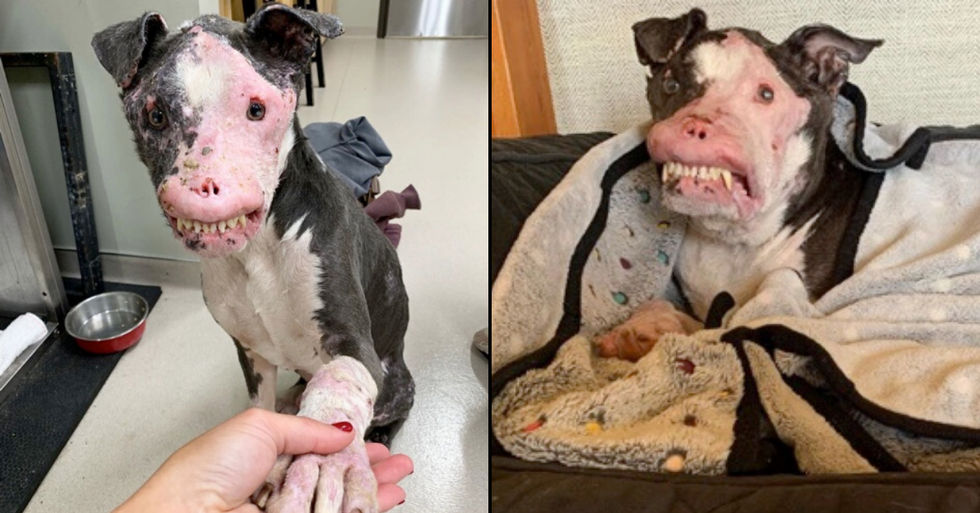 Dog With Disfigured Face Finally Finds Happiness After Being Rescued

A stray dog with horrific facial and skin disfigurements has finally found happiness after being rescued off the streets and nursed back to health.

Keep scrolling to read Phoenix's incredible story, and to see his amazing recovery...

And, if a rescue dog happens to suffer from any illnesses or disabilities...

It becomes even harder to find them a forever home.

Many disabled and disfigured dogs are instantly judged...

And many people struggle to see past their appearance.

But it's important to remember...

That disabled dogs need love too.

This brings us to the heartbreaking story of Phoenix.

As you can see, Phoenix suffers from a pretty severe facial and skin disfigurement.

Phoenix was found roaming the streets of Collinsville, Oklahoma.

A concerned homeowner in the area spotted the unusual-looking dog and posted a photo of him onto a local Facebook group.

Where the kind-hearted staff quickly got to work to determine what was actually wrong with him.

They couldn't decide if Phoenix was merely suffering from a skin condition...

Or whether he was a victim of horrific abuse.

Either way, they were determined to help Phoenix as best they could...

And they had full faith in his ability to recover. Writing on their Instagram page, they said: "We don’t know his story. We can only imagine what he would say if he could tell us. What he HAS told us, is he will not lose. He will not give up and neither will we. He has endured the hottest days and coldest nights and still stands."

The shelter staff got to work on finding out the cause of Phoenix's facial disfigurements...

He was referred to a handful of veterinary specialists. "Next, Phe’s adventure took him to Veterinary Allergy and Dermatology clinic in Overland Park, Kansas. There he met Dr. David Senter, a veterinary dermatologist. He also focuses his veterinary skills on patients with skin diseases."

And, after several surgeries and biopsies...

It was discovered that the pup suffers from an auto-immune illness called Systemic Lupus Erythematosus (SLE), Metro reported. The condition basically causes Phoenix's body to attack itself.

And, now that Phoenix had an official diagnosis...

It was time to start healing his devastating wounds.

The difference his medication made was remarkable.

Updating Phoenix's recovery journey, his rescuers wrote: "Phe is improving every day.  He has gained weight.  His skin is healing.  He plays and barks.  He chases balls and plays tug-o-war.  He even sleeps on his own dog couch."

Phoenix is yet to find a forever home...

But, it is undeniable to see that he is simply thriving.

Though the pooch has been having a lot of sleepovers at his main veterinarian's house...

And, writing on Instagram, his rescuers said: "Maybe she’ll pull the trigger soon and become his official mom". Our fingers are crossed for you, Phoenix! For more on adopting dogs, keep scrolling to read about how one major beer brand are doing their bit to help rehome our shelter dogs...