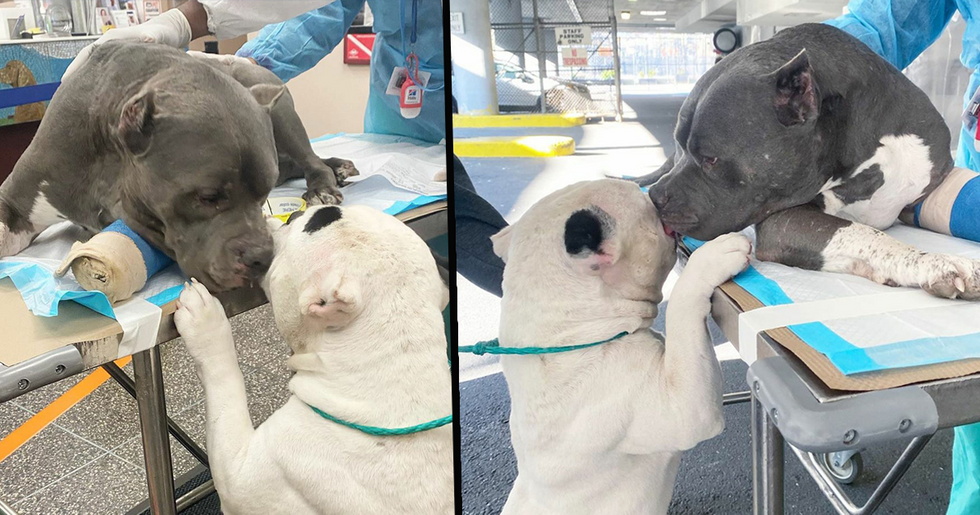 Dogs seem to have more sense than humans these days, their affectionate nature is second to none, and there's nothing that can't be fixed by snuggling your cute little pup.

There seems to be a rise in Instagrammers traveling with their dogs, and while the pictures are beyond cute, the reality can be more dangerous than it seems. Tragically, one family has had to learn this the hard way.

The video is heartbreaking...

There's no doubt that dogs share emotions similar to ours, it's not unusual to wonder if dogs are, in actual fact, better than humans.

The answer is yes. While some might dispute this, there's no hiding that dogs always support one another in times of need, as a video has shown after two dogs unite following a horrific accident with their owner...

Some owners are so smitten with their pups, that they couldn't possibly leave them at home, they have no choice but to take them travelling with them.

Here are 8 best pups that are better travellers than you...

Be prepared for some serious pup envy...

Loki and his human, Kelly Lund, started skiing together when Loki was 4-months-old and before he turned 3, the wolfdog had seen most of the western US. That's more than I've seen my whole life!

Momo is a border collie who likes traveling in his human’s VW van and playing hide and seek. Momo has traveled all across the US with his owner Andrew.

Aspen is a 4-year-old Golden Retriever living in Colorado, who likes exploring the great outdoors with his owners whatever the season!

Maddie and her owner Theron love to go on road trips, motorcycle rides, and camping adventures together.

Diesel and Sam live in the Pacific Northwest where they spend most of their time enjoying the outdoors.

Nero has been everywhere! He’s followed Joshua on a 2800-mile bike trip around the UK, as well as biking to the south of Portugal, and has just completed a 1,777-mile stand-up paddleboard trip down The Danube river!

Stephen Simmons is a war veteran who struggles with PTSD. He uses “adventure therapy" as a way of dealing with his stress and anxiety. In 2004, on a mountaintop, he found Puppi, the dog who always accompanies him on his hikes. Later on, he adopted Burma, the cat who now joins them on their adventures in the wilderness.

Max and Louise are Russell Terriers from Lisbon who travel in style around Europe. When they’re not busy sightseeing, the pair enjoy relaxing on the beach. Who doesn't!

Sadly not all adventures are without risk.

When it comes to hiking or exploring with animals, things become more complicated, especially when you find yourself lost in the middle of nowhere.

Tonka and Little P were out on a hike in Colorado with their owner Kris Busching, 33, and his friend Mark when the group found themselves lost.

After 2 days without food or water, Kris and the dogs attempted to descend into a canyon to get fresh water but fell.

As he lost his footing, Kris tried to pull his dogs up safety but they all tumbled to the bottom of the canyon.

Kris was tragically killed on impact, while Tonka and Little P were both injured. The distraught pit bulls stayed by Kris’ body until help finally arrived a day later.

After being rushed to the emergency vet, the 2 brothers “who lost their world suddenly," comforted each other as they both dealt with the pain of their injuries and their loss.

In a video shared by the vets on Thursday, the two pups sweetly touch noses, showing their heartwrenching bond as Tonka was admitted to the animal hospital.

The shelter is now looking for someone who is able to adopt both dogs so that they won’t be separated.

Due to the family being “overwhelmed with funeral expenses and unable to afford" medical costs, a GoFundMe campaign was set up to raise money for the pups.

As of today, the campaign had raised 20,540 dollars for the pair, far succeeding their initial goal of 8,000 dollars.

The remainder of the money is also to help out Kris' family with financial needs. “We are all devastated, and really can’t describe the void and pain that we all feel," said Kris' brother Dave.

In an update, the vet announced Little P did not need surgery and will be placed in a foster home while Tonka recovers from surgery, so he can heal.

In addition to his broken leg, Tonka also “sustained an injury to his right wrist," on which veterinarians placed a splint. Luckily it doesn't need surgery and he is expected to be discharged by Saturday. Going forward, we can only hope the sweet dogs find a new loving home, and that Kris' family can carry on despite their tragic loss. Keep scrolling for the most beautiful dog crossbreeds... And yes, they are real.