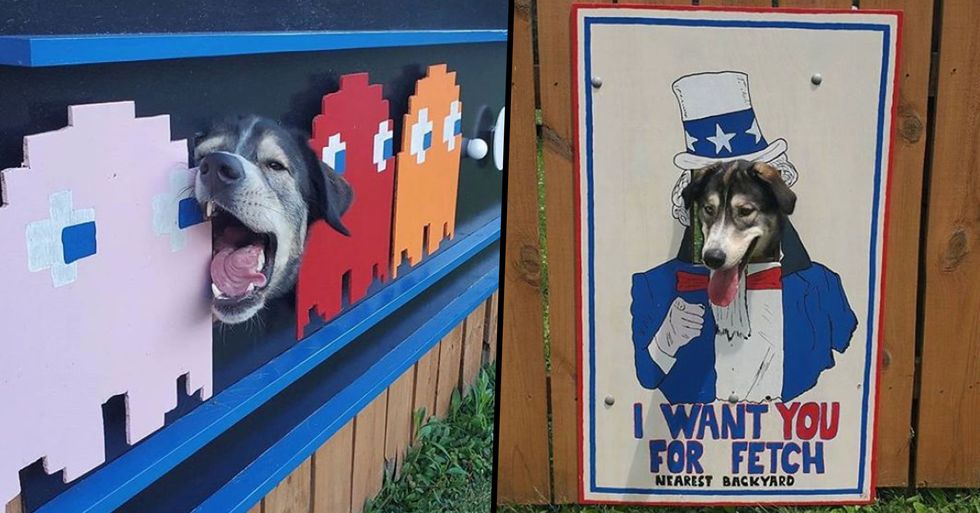 Everyone has had to adapt to quarantine living over the last few months. With things starting to get a little monotonous at home, one man decided to create something to brighten up his neighborhood.

Families everywhere have had to get used to being cooped up in the house together.

And as a result, many have come up with entertaining ways to pass the time.

Brian Stanley has come up with the best idea, and it made the whole neighborhood smile.

His dogs Ripley and Burger were in on the whole thing. They both have a habit of staring through the fence at passers-by.

So Brian decided to create posters, perfectly placed in line with the hole.

So that when his dogs poked their heads through the fence, the posters would come to life.

The first one he decided to make was this Paws-themed poster.

His creativity made quite the splash...

“The whole thing started last August when Burger was just a few months old and started digging under the fence so that he could look at people going by. To solve this, I cut a hole in the fence to act as a window for him. He immediately started using the window and stopped digging."

Lockdown was when the idea really took off...

“Fast forward to this March and the COVID shutdown. I found myself out of work and my son home from school. The two of us noticed an increase in foot and bike traffic on the street side of the fence. I came up with the idea to paint a dog-themed painting to frame the window, which would be brought to life when Burger stuck his head through the fence."

When asked how often they look through the fence, they said...

“We have 2 dogs and both are sweethearts. Ripley, however, is more tentative. She is somewhat more of a barker towards anyone approaching the fence. She loves the attention but is more hesitant than Burger to embrace it. Burger, on the other hand, loves attention. The fence window I cut is the first place he goes when I let him outside. I’ve seen him just stand there with his head through the hole watching the world go by."

Seeing how many people loved the idea, he decided to make more.

This one is inspired by Pacman.

The neighborhood loves them.

“Burger is the star of the show. The hole I cut in the fence is the first place he goes when I let him outside. Even if he and Ripley are running around in the yard, he keeps an ear out for anyone that goes by and will run over to the hole to look out at them."

Both dogs have the best personalities.

“Both are amazing dogs. Ripley is shyer while Burger is more outgoing. Burger is the classic knuckleheaded dog. He’s always happy, always smiling, and willing to please and make people happy."

The Dog with the Bone Earring...

Personally, I think it's even better than the original.

He got the whole family involved.

“My son helped match colors, paint, and hang ‘The Bark’ which was our version of the famous ‘The Scream’ painting. In the beginning, we just thought it would brighten the day in the neighborhood and hopefully bring a few smiles to people’s faces."

He's given people something to make their day just a little more special.

"There was an immediate positive response to it. My son and I have no plans to stop putting up new paintings and have enough ideas to keep doing this for years."

The more they did, the more positive feedback they got.

This is called The Bark, and it's a lot cuter than the original Scream.

Brian has had a lot of reactions from the neighbors.

“People in the neighborhood will stop and take pictures at the fence with the dogs. They will bring treats and give love to Burger who is usually the one with his head sticking through the hole. Both my wife and I have been stopped by walkers, runners, bikers, and people in their cars who they tell us how much they love what we are doing."

“I love the Pacman piece we did and I also love ‘The Dog with the Bone Earring’ but for different reasons. Pacman because it’s not a 2d piece. We cut, painted and attached individual pieces to it so that it had a more 3d look to it. “Bone Earring" because of how challenging it was to duplicate the original piece of artwork so people would recognize it"

Burger pretending to be a dinosaur.

Like everyone, quarantine has taken its toll on Brian and his family.

“The quarantine has taken a heavy toll on our family. It was a struggle with me out of work. All of us have had to adjust to this new reality we find ourselves in. Like the rest of the world, we’ve had to make sacrifices. We will be stronger on the other side."

He's hoping the audience will grow, and they can use the space for good.

“I hope that if our little art project gets more of an audience we can continue to make and post new pieces on our fence and also to feature adoptable animals on our social media pages like Instagram."

These adorable puppers certainly put a smile on everyone's face.

I don't think that'll be the last we've heard of Ripley and Burger.

Keep scrolling to see the cutest raccoon artists and their amazing paintings...