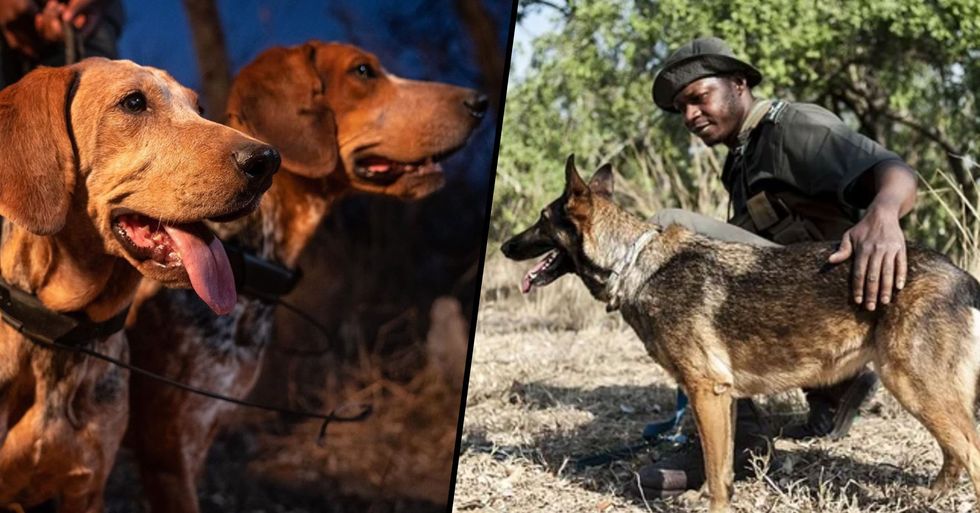 Dogs Trained to Protect Wildlife Save 45 Rhinos From Poachers

In the most remarkable news this week, a group of dogs that were trained to protect endangered wildlife have successfully saved forty-five rhinos from poachers.

Keep scrolling to read more about this new tactic, and to see footage of the heroic dogs for yourself...

In recent years, rhino numbers have been dwindling.

While these majestic animals once flourished throughout various parts of Europe, Asia, and Africa, today, it is believed that as little as 29,000 remain in the wild, according to the WWF.

It is a devastating situation.

Today, rhinos can only be found in parts of Africa, and very few are able to survive outside of national parks and nature reserves.

How can a species, that once thrived in the wild, struggle to exist without human assistance?

Well, poachers can be thanked for that.

For decades now, rhinos have been poached to the brink of extinction... And it is all for their horn.

The demand for rhino horn has long been rife across many parts of Asia.

Rhino horn is used in traditional Chinese medicine, but, more commonly, it is used as a status symbol to display success and wealth.

Over the years, the slaughter of rhinos has become steadily more controversial...

But this means that poachers have only been becoming a larger threat.

Poachers are now being supplied by international criminal gangs with sophisticated equipment to track and kill rhinos...

Meaning that they have been killing rhinos at an even more alarming rate than before.

The issue of poaching has been notoriously difficult to manage...

But now, an unexpected solution may have just been found.

Dogs have been brought in to the dangerous world of poaching...

And, remarkably, their assistance has actually been benefiting the issue.

Man's best friend could be the solution we've been looking for all these years.

The Southern African Wildlife College in Greater Kruger National Park, South Africa, have been training a group of dogs to help combat the issue of poaching.

South Africa is one of the worst-affected countries in Africa when it comes to poaching...

Some 8,000 rhinos were poached in South Africa between 2008 and 2018, with more than half killed in Kruger, the country’s signature national park, and the surrounding private reserves.

The dogs vary from beagles to bloodhounds...

And are enrolled in their training programmes from puppies.

Straaten pointed out that the "game changer" was using free tracking dogs as they can track much faster than a human can.

Dogs are known for their astounding sense of smell...

Depending on the breed, a single dog's nose can be 1,000 to 10,000,000 times better than a human's, as can their hearing. So it makes perfect sense to use our 4-legged friends in the fight against poachers.

Of his revolutionary project, Straaten explained:

"The project is helping ensure the survival of southern Africa’s rich biodiversity and its wildlife including its rhino which have been severely impacted by wildlife crime."

The project has been a roaring success.

According to authorities, the hounds have helped law enforcement teams in the greater Kruger region catch an unprecedented 145 poachers and confiscate fifty-three guns.

And, even more remarkably...

The figures show that, in total, the dogs have helped to save forty-five rhinos that were once destined for slaughter.

This is an incredible accomplishment.

On the figures, Straaten said: "The data we collect for this applied learning project aimed at informing best practice, shows we have prevented approximately forty-five rhino being killed since the free tracking dogs became operational in February 2018."

The dogs have been remarkably effective.

The statistics speak for themselves. "In the areas where the Southern African Wildlife College patrol, the success rate of the dogs is around sixty-eight percent using both on and off-leash free tracking dogs, compared to between three to five percent with no canine capacity."

You can watch footage of the hounds in action here.

This is an amazing step forward in the fight against animal poaching... Well done, you good boys. For more on the positive effects we've been having on African animal populations, keep scrolling to read about the numbers of elephants and rhinos skyrocketing thanks to an anti-poaching force...
20%