Dogs Who Simply Forgot How to Dog | 22 Words 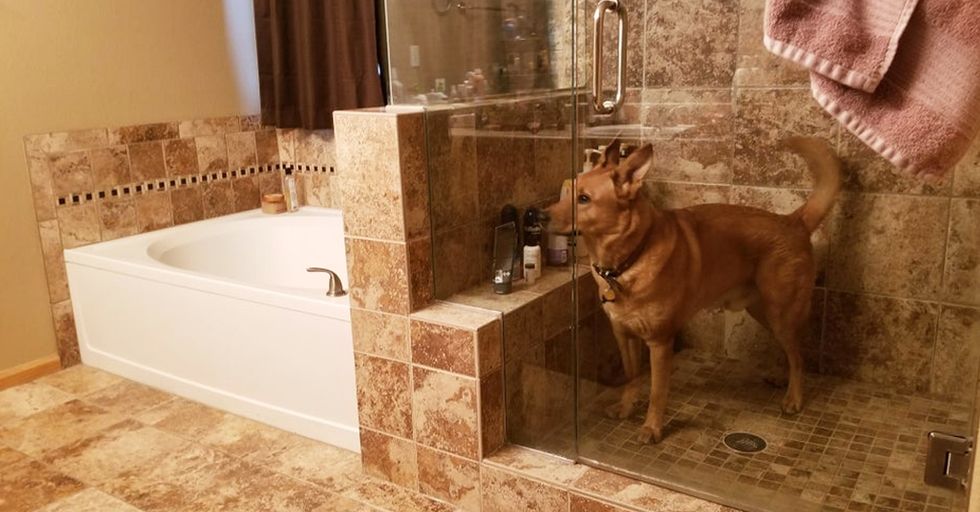 Dogs Who Simply Forgot How to Dog

Listen, dogs are the best thing to ever happen to mankind, full stop. In no way do humans, with all the awful stuff we do, deserve dogs. And yet, the luckiest among us have these beautiful, kind creatures literally living in our home and are constantly rewarded with their unconditional love.

But as great as they are, sometimes dogs try to do standard dog things — like catching tennis balls, or zooming down the hall when they get a sudden burst of energy — and just completely blank. They stare straight ahead as a tennis ball hits them in the nose, or stop mid-zoom and begin to contemplate the mysteries of the universe.

And when dog owners are really lucky, they're able to snap a picture of these doggy brain-farts that make other people watching ask, "what's wrong with your dog?" Here, then, is a collection of photos of dogs who, hilariously, simply forgot how to dog.

Got a live feed camera so I could see what my dogs are up to while I'm at work. - kevinaud

He looks like he's terrified he's about to get into a bar fight.

The vet recommended veggie treats for my fat old man. He sneezed into his bowl of goodies and looked so embarrassed by the mess. - eveningdatura

"I am in a glass case of emotion!"

Trapped himself in the shower at some point during the night. Woke up to scared whining. - macthebearded

Great, now his tongue's stuck in there.

He breathed in while licking his nose and his tongue got sucked into his nostrils a little bit. - isiik

After a walk through the snow, Arlo is ready for Paris fashion week. - Floralmuckboots

My pathology is that I would never stop trying to get this dog to laugh at one of my jokes.

It’s just her face. She’s the sweetest dog ever. But she constantly looks disappointed in us. - GingerWife2017

He has three expensive beds but prefers this one goddamn brick. - teairl

Just a normal day with a husky. - MyNameGifOreilly

We got Pennywise the Dog over here.

That's a nice looking treat you got there. - One_Day_Dead

My dog had a few words for the Amazon man today. - ReclaiminRhodesia

I do this when I check my bank account after going to GameStop.

When he gets frightened he does a derpy dance. - MyNameGifOreilly

I do this when I check my bank account after a weekend in Vegas.

Must be watching a terrifying horror movie. - [account deleted]

Her bowl is in the dishwasher. - noiamnotyourfriend

He collected all balls he found in the house and then laid like this for 10 minutes. - chrisbiss_15

There's no coming back from this one.

Truly, dandelion zoomies are the most dangerous of the zoomies, because you just know that dog's feet are yellow forever.

He looks like the crane in those arcade machines where you can win a stuffed animal.

The creation of... something. - whiteniteee

It looks like he was wearing roller skates and just wiped out.

My dog was sitting like this while being fed with a fork by her grandpa. - pilarstol

Right now, I'm looking for a dog to adopt. I gave this little guy the "sit" command and he sat down like this. I think I just found my new dog. - PollitaLoquita

"I will not give in until you do your part."

He thinks this little human can play ball with him. - commonvanilla

See, this is what you get when you let your dog read Sun Tzu's "The Art of War."

If he skitters outside, I'm out.

He looks like you just told him a great joke.

This is what I come home to every day. - aracauna

Not even sure where you'd put in a replacement...

Showing off their contortionist skills.

Honestly, how is this comfortable? - BabyBellGrande

Guess which one is the little brother? - CucumberCandy

I will not be shamed by you, Millie.

Millie sneezed herself awake and then looked at me like I was to blame! - lostcalifornian

I have the same problems as this dog.

I wonder if my life is going the right way. - oscarrico54