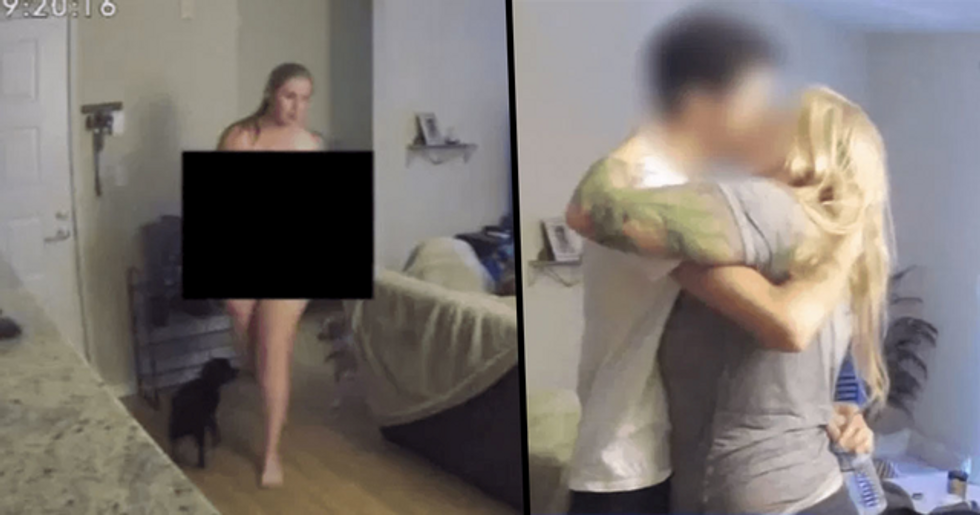 Dogsitter Caught on Nannycam Getting Naked and Taking Boyfriend to Bedroom

Pets are wonderful creatures. They provide endless love and never hold anything against you. They just forget and move on. Pets will be there for you regardless of what crappy thing you've done in the day and whatever other people think about you.

But although dogs are man's best friend, they require quite a lot of upkeep. They are in no way self-sufficient and need to be fed, watered, and let out, several times a day. So what should you do when you need to go away for a few days?

Well, this person tried a dog-sitter, but it didn't go at all as she had hoped.

We all know the dilemma.

We have pets, and we love them. But we've got human lives to live, too.

What do you do with your pets?

You want to go on vacation, but you've got a pup. What are you supposed to do?

Should you try to take the little guy with you?

Leaving them behind seems cruel. But not all dogs are small enough, or obedient enough, to go with you whenever you leave the house.

Should you change your vacation destination to somewhere more local?

Maybe you think about changing your dream vacay. If you keep it local, you can take your pet with you.

You could keep your buddy in a kennel.

But kennels are expensive. And it can be up-rooting for the dog to be left somewhere unknown. While kennels do tend to provide a good service, it can be hard to leave your dog there.

Dog-sitters are the answer more often than not.

The least disruptive option is to pay someone to come and look after your beloved pet. It's easy for you and for your dog.

So what's the catch?

It can be weird to invite a stranger into your house. And how do you find someone that you know can be trusted?

That's why there's a new app around. Introducing: Wag!

Wag! helps dog-sitters to offer their services, and for dog owners to look for the right person to look after their pet.

It's your typical online service.

It connects dog owners with dog-sitters. As with most apps, it works on a user-review system. But in this case, the dog owner didn't get what they were paying for at all.

Who would want to be a dog-sitter?

You might be wondering, who'd want to be a dog-sitter? Well take a look at these guys and see if you'd want to be one!

Could you resist these little fellas?

When dogs look up at you with these faces, you just know they want to go on a long walk. And they'll love you forever if you take them. That's why dogs are so great.

How hard can it be?

Dogs are pretty simple creatures. They like going for walks, playing with a ball, and getting some good meals. It's sort of hard to mess up. Or so you would think...

One dog owner didn't get what she was looking for.

You'd think that finding a dog-sitter would be a fairly easy task, especially with an app to help you find them. But, unfortunately, that isn't always the case.

Rosie Brown has two dogs, Penny and Daisy. She was going away for her cousin's wedding and decided that the best option would be a dog-sitter.

How wrong can a five-star review be?

She found Casey Brengle, who was very well reviewed on Wag! In fact, she had two-hundred and ten five star reviews. It seemed like a no-brainer.

You can make some good money from being a dog-sitter.

Casey agreed to look after the dogs for four and a half days, for a pay of $316. She just had to take them for a few long walks, let them out, and feed them.

And the doggy-cam saw it all.

When Rosie told Casey that she had installed a doggy-cam, which also gives out treats, Casey mustn't have been listening. She says that she knew, but surely she wouldn't have acted like this if she had remembered...

The dog-sitter is meant to do the job alone.

While Rosie was away, she saw on her doggy-cam that an unknown male was in the house. As it turns out, that man was Casey's boyfriend. This is obviously not allowed.

There's no need to take rage out on a dog.

Casey was caught on camera referring to one of the two dogs as a "bitch." Okay, so we know that that's a term for a female dog, but the way she said it was nasty. But that's not the most upsetting thing that Rosie saw.

Casey was so busy with other activities that she only let the dogs out for five minutes. Let's not forget that she was being paid $316 for the service that she was supposed to be providing.

Can you believe she did this?

Instead of walking the dogs, Casey proceeded to get naked with her boyfriend. She then led him into the master bedroom. But that's still not the bit that made Rosie most upset.

Casey even had her parents over to visit. This is completely against the rules of the Wag app, which specifies that there should be no third-party visitors.

There is no need for this.

The biggest issue that Rosie has with it all is that Casey sat on her brand new sofa, butt naked. Can you imagine?

The struggle is real.

In an interview with KABC, Rosie said: "To see that video where she's like butt naked, sitting on it, laying on it, that was really hard 'cause like we just bought it."

It has ruined her spot forever.

She also said that it's affected the way that she uses her own sofa. She said: "I don't lay down right there, you know? [...] That actually that used to be my favorite spot, right in the middle of it. I don't really touch it."

The allegations are pretty firm.

So what does Casey have to say about all of this? Does she have any sort of response?

How hot could it have been?

Casey denied the wrong-doing (despite the doggy-cam). In fact, she said: "It got hot. As I've said, I don't like wearing clothes." We've heard that one before.

Does an apology make it all better?

She apologized for calling the dog, Daisy, a "bitch," and agreed that her behavior had not been appropriate although she said that it was due to other issues and that she was taking it out on the dogs. But that doesn't make up for the problems with the sofa.

No more work for the naked dog-sitter.

Wag! has suspended her, saying that: "The reported behavior in this situation is unacceptable and contrary to our Community Guidelines... We expect everyone on the Wag! platform to conduct themselves professionally."

Just be careful who you pick.

Next time you need a dog-sitter, make sure you meet them first and be very clear about what you expect from them. And maybe get yourself a doggy-cam too, just in case. You never know what someone might be like behind closed doors…