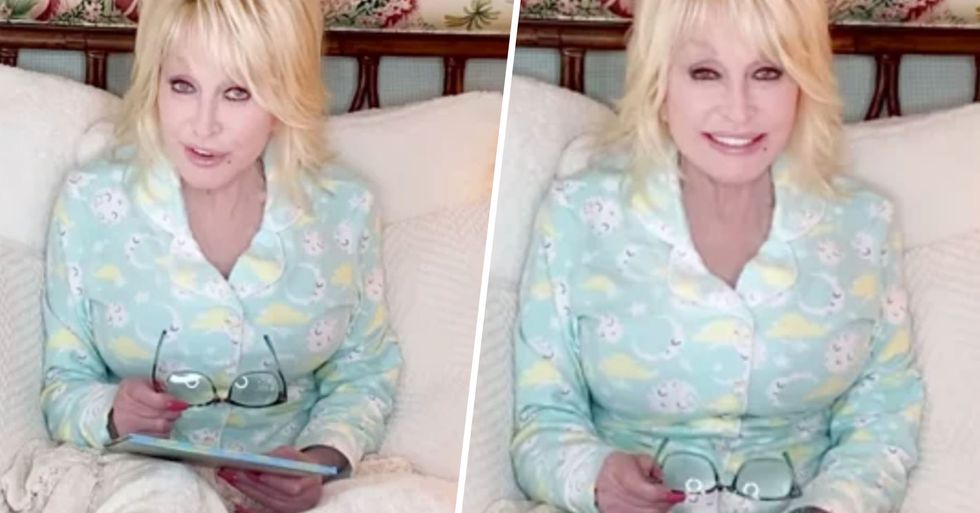 After stirring up a little bit of controversy over the coronavirus pandemic, Dolly Parton seems to have redeemed herself.

Keep scrolling to learn about her new gig reading bedtime stories to children...

Born in Locust Ridge, she was the fourth child of a whopping twelve, and comes from humble beginnings, having described her family in the past as "dirt poor."

She has credited many of her family members for helping mold her musicality, but particularly her uncle, Bill Owens, for getting her foot in the door of the industry.

In 1975 and '76, the Country Music Association awarded her with Female Country Singer of the Year and, during this time, she was also working on moving into the pop market in order to further her career.

And, as well as being a musician, she also dabbled in the world of film.

She made somewhat of a name for herself in the modeling world, too.

We all recognize that 1978 Playboy cover shoot.

So, it's needless to say, Dolly is an icon.

Over the years, the singer has built her image around being America's sweetheart and even now, at the age of seventy-four, she still has a strong and loyal fan base.

Over the years, she has become a woman of the people.

Coming from humble beginnings, the singer has always given back. She established the Dollywood Foundation in 1996 and, with the goal of improving literacy among young children, she created Dolly’s Imagination Library, a program that donates more than 10 million books to children every year.

But recently, she made some rather controversial comments that many people are not happy with.

The singer took to Instagram this week to give her opinions on the on-going coronavirus pandemic.

The pandemic has completely devastated the lives and livelihoods of millions of people...

So Dolly's recent message of faith and hope didn't sit too well with some of her fans.

The singer shared a video of herself in her home with her 3.1 million Instagram followers...

In which she gave her shockingly blasé stance on the ongoing medical crisis.

Dolly seemed to be in tremendous spirits.

She opened her video with a jaunty greeting, beaming and exclaiming: "Well hello, it's Dolly, climbing the stairway to heaven, because the virus has scared the hell out of us" before bursting into laughter.

She suddenly seemed to gain a little composure...

And continued: "I'm not making light of the situation. Well, maybe I am because it's the light, I believe, that's going to dissolve the situation."

She then went on to reveal her belief behind the whole pandemic.

And it's all God's doing... Apparently.

The singer believes that God has imposed this virus upon us.

But it's all in good reasoning, of course. "I think God is in this, I really do. I think he's trying to hold us up to the light so we can see ourselves and see each other through the eyes of love. And I hope we learn that lesson."

She stressed that this pandemic will make us "all be better people"...

And took the time to remind us that "God loves us"... Which, with the tens of thousands currently dead as a result of "His" virus, came across as a little distasteful.

And, while many thanked her for spreading words of positivity and encouragement, some found her message to be a little unsavory. One social media user wrote,"Nah can’t agree with you one this one, all be better people? Even the dead ones?" And another commented, "Yet people are suffering, dying, losing everything. Thnx God."

Dolly hasn't yet responded to the backlash...

But they couldn't have come at a better time as she has just announced her new, and much more heartwarming, venture.

She posted a video on Facebook explaining her new gig...

She is collaborating with The Imagination Library.

Goodnight with Dolly will run for 10 weeks with the aim of offering children "a welcomed distraction during a time of unrest."

She also wrote a blog post about the new venture...

"This is something I have been wanting to do for quite a while, but the timing never felt quite right," she said in the blog post. "I think it is pretty clear that now is the time to share a story and to share some love."

The list of books that Dolly will be reading comes from the Imagination Library’s titles for young audiences...

These include Dolly's own "Coat of Many Colors" and Watty Piper’s classic "The Little Engine That Could." "It is an honor for me to share the incredible talent of these authors and illustrators," she added, "They make us smile, they make us laugh and they make us think."

The first reading will happen tomorrow on April the 2nd...

So make sure to tune in if you're interested in hearing Dolly Parton read some bedtime stories!