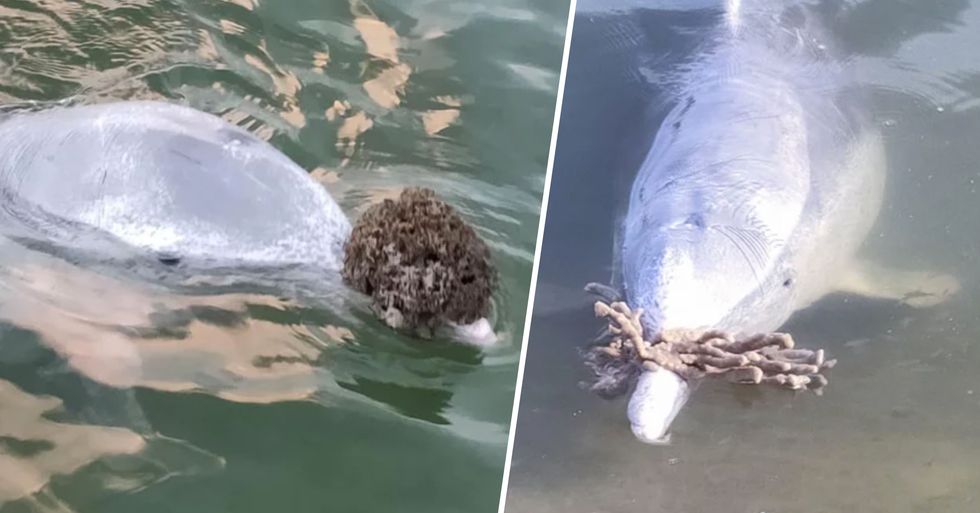 Dolphins are amongst the most magical creatures on earth. And one, in particular, has captured the internet's heart this week ...

It's no surprise people just can't get enough of these majestic creatures.

In fact, it is striking how many similarities dolphins actually have in common with humans.

Did you know that dolphins communicate with each other?

Not only do they talk to each other, but researchers have discovered that dolphins call each other by their names.

Well, not exactly names - but a "signature whistle."

Researchers found that dolphins "only responded to their own calls, by sounding their whistle back" - which is sort of like the way we respond to our name being called.

And by that, we don't mean that they were always doing shows for the paying public...

Going back millions of years ago...

Dolphins actually had "hoof-like toes at the end of each foot" and were completely land-based.

They evolved from a mammal called "even-toed ungulates" and, about fifty million years ago, became water-based mammals instead.

The facts about what is happening in our oceans are truly awful.

Industrial fishing, which started to cater to our never-ending demand for fish, is creating a completely unsustainable and dangerous atmosphere.

It's not just SeaWorld that dolphins have to worry about...

Even though dolphin is not something that we typically have on the menu, the way industrial fishing works, they are still being caught.

But there are some places turning things around.

There are good people out there who care about the dolphins!

It's based in Queensland, Australia, and has dolphin welfare at the top of the menu.

And there's one dolphin who has really captured the internet's attention this week.

Mystique has been hitting headlines for a very adorable reason.

Because she loves to bring humans gifts.

Ok, they're not exactly a Nintendo Switch - they tend to be random stuff from the bottom of the ocean.

Which is, in a way, even cooler, right?

Truly, these are one of a kind gifts!

Here's the dolphin in question.

Quite a cutie, if you ask us.

But in recent weeks, she's been a bit lonely.

Yet another unexpected consequence of lockdown!

She often gets fish in return for the gifts.

So maybe there's an ulterior motive ...

Either way, it's very adorable.

Generosity is a beautiful trait.

We hope she gets some visitors soon!

Who wouldn't want to receive one of her treasures?