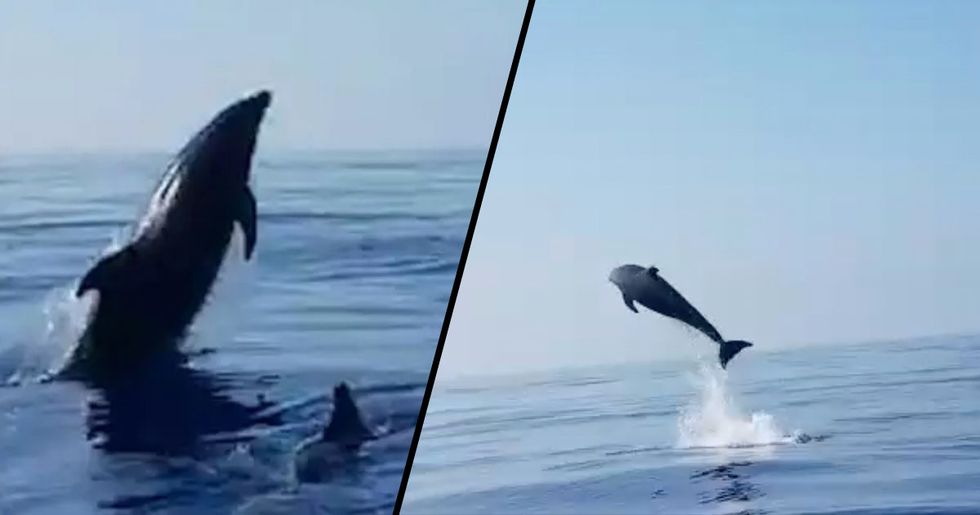 Dolphin 'Jumps for Joy' After Fisherman Save Her Baby from Net

It's one of the biggest travesties of fishing today and it's the reason that we all guiltily check whether or not our tins of tuna read "dolphin friendly."

Sadly, in most cases, when a defenseless dolphin gets caught in a fisherman's net, there's nothing that can be done.

Reports of dolphin corpses getting washed up on beach shores reveal to us the dark story of how the fishing nets trap their fins, leaving them unable to swim away. Some dolphins try to pull away so much that they end up tearing their fins off and their corpses line up on our shores as signposts of the horror of our consumption greed.

None of that makes for nice reading, but, fortunately, I'm not going to be telling you about that. In this case, the dolphin that got caught in a fisherman's net in the waters around the Italian island of Procida, Naples, was freed.

The cute thing about this story is how the dolphin mother celebrated its baby's release. If you're a bit mushy, like me, then this story will seriously make you cry.

Dolphins are not pets.

Places like SeaWorld are a monstrosity in that they literally cage these highly intelligent mammals and parade them to the paying public.

In fact, it is striking how many similarities dolphins actually have in common with humans.

Did you know that dolphins communicate with each other?

Not only do they talk to each other, but researchers have discovered that dolphins call each other by their names. Well, I mean, rather than "names," the BBC explains that the researchers found that they have "their own 'signature whistle.'" Researchers found that dolphins "only responded to their own calls, by sounding their whistle back" - which is sort of like the way we respond to our name being called.

And by that, I don't mean that they were always doing shows for the paying public...

I mean, we're going back millions of years ago...

Still, back in the day, dolphins actually had "hoof-like toes at the end of each foot" and were completely land-based. They evolved from a mammal called "even-toed ungulates" and, about fifty million years ago, became water-based mammals instead. Crazy that, isn't it? Imagine if we eventually evolved into water-based mammals! I guess we're making plenty of room in the oceans...

The facts about what is happening in our oceans are truly awful.

Industrial fishing, which started to cater to our never-ending demand for fish, is creating a completely unsustainable and dangerous atmosphere.

It's not just SeaWorld that dolphins have to worry about...

Even though dolphin is not something that we typically have on the menu, the way industrial fishing works, they are still being caught.

Sealions are perhaps my favorite animal, they're like water pooches. But, sadly, all sea life is suffering due to the heavy pressures that have been put on the fishing industry. Fortunately, the seal caught in this video was saved when it was spotted by a fisherman and set free.

Just had a near-death experience. Got my foot caught going over the rope from the stands to media seating. Couldn't… https://t.co/oVGrvVGsj3
— Tim Fitzgerald (@Tim Fitzgerald)1517276716.0

Perhaps if all humans experienced how awful it was to get trapped in a net, we wouldn't fish at all. Maybe that's a bit too "vegan anarchisty" of me. I mean, how can I talk when I often make fish stick sandwiches?!

If anything will put you off your seafood buffet...

It's this adorable video of a mother dolphin jumping for joy when her baby is freed from the deadly fishing net.

The video that was originally shared by Mario Polizzi on Facebook has gone viral. People all over extremely touched by the mother dolphin's reaction. If you're in the mood for some more good dolphin news, continue scrolling. As of this year, Canada has passed a “Free Willy" Bill which bans dolphin and whale captivity. Read all about the ins and out of the bill right here...