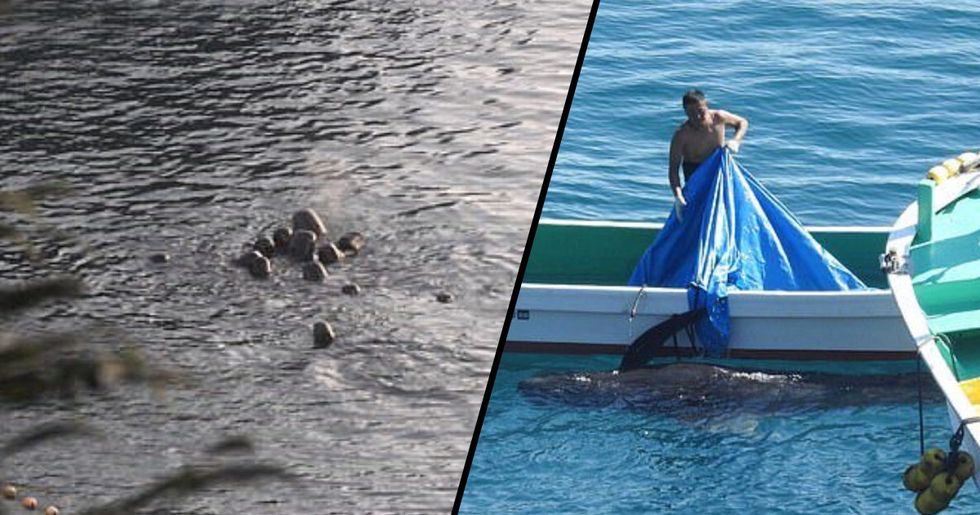 Dolphins Swim Close Together ‘for Comfort’ Before Being Killed in Japan

Japan's dolphin hunting season is in full swing and, to commemorate the start of the disturbing tradition, heartbreaking footage of a terrified pod of Pilot Whales just before their inevitable slaughter has gone viral.

The footage, which sickeningly shows the whales gathering together for comfort before their deaths, was filmed in a cove near Taiji, Japan, and has sparked worldwide outrage, with many calling for the archaic tradition to be banned for good.

Though the country banned commercial hunting back in 1986, the practice was recontinued in July this year.

The Japanese Fisheries Agency insisted that the move was in aid of scientific research...

But, when discussing the launch of the first whaling ships in over thirty years, the director seemed overjoyed with the resumption of the tradition, and said: "To be able to be here and send off commercial whaling ships for the first time in thirty-one years is something that I think is very emotional for those who have been working for the resumption, and I am happy from the bottom of my heart."

However, dolphin drive hunts have never actually been made illegal.

This particular hunt is based on driving dolphins and other small cetaceans into a small bay where they can be killed or captured for their meat and for sale to aquariums. Dolphin drive hunts exist in coastal communities around the world.

And one of the most widely documented drive hunts has officially begun.

The small village of Taiji, in Japan, has welcomed in its annual dolphin hunting season, as twenty-six fishermen aim to fill their kill quota of 1,400 dolphins and 300 whales.

Attention was brought to the disgusting tradition back in 2010.

The Academy Award-winning documentary The Cove, which filmed the slaughter of so many dolphins that it turned the waters red with blood, shed some light on the devastating impact the ancient tradition has.

Thousands of innocent whales and dolphins are slaughtered every year.

And in the most brutal manner. For years, the tradition has seen fishermen mercilessly killing the dolphins with long, sharp spears and dragging them onto boats where they would eventually die a slow and painful death.

And if they're not killed...

They're torn out of their natural habitat and sold off into captivity.

But what is the whole point of this annual tradition?

There isn't one. Traditionally, the main purpose of the dolphin hunt was to provide dolphin meat to the Japanese people – but in more recent years, only a small minority of people in Japan actually eat the meat.

Another excuse is overfishing.

Japanese fishermen, supported by their government, are wrongly blaming the dolphins for the decline in fish in the oceans. From the fishermen’s perspective, the dolphins eat too much fish, and the fishermen are simply killing the competition. Again, there is absolutely no evidence to support these claims.

The non-profit organization, Dolphin Protect, have argued against their excuses.

The official reason Japan has given for the annual hunt is to use the dolphins for meat, but Dolphin Project says there are other reasons as well. “From the fishermen’s perspective, the dolphins eat too much fish, and the fishermen are simply killing the competition…It is about eradicating as many dolphins as possible in order to make the oceans’ fish available to themselves."

The annual tradition has no real benefit.

And is just another disgusting example of animal cruelty.

And now, fresh footage has emerged...

Which shows a pod of Pilot Whales huddled together in terror as they're mercilessly slaughtered by fishermen in the cove.

The frightened creatures were seen taking solace in each other...

The nursery pod of pilot whales pictured had been ruthlessly hunted for hours on Septmber 9th, only to be driven into the shallow waters. Exhausted and traumatized, the family were seen surfacing to catch their breath.

They were cornered into the cove.

And once the nets were dropped and their fate was sealed, they swam in a tight circle, consistently touching one another for comfort.

Even before the slaughter began...

The methods used to drive the whales into the cove caused horrific injuries and even resulted in some fatalities. Video footage was captured of the process, where the whales are seen throwing themselves into jagged rocks out of sheer panic.

They were left cornered into the same spot for the full night.

And the following morning, on September 10th, after the dolphins had been left confused and terrified all night, the hunters arrived at the Cove to begin their day’s work. Heartbreakingly, the pod was still swimming just as closely together as they had been the night before.

Divers entered the water to begin the selection process...

In the end, 8 of the Pilot Whales were chosen for a life in captivity.

And the rest were subsequently slaughtered. It was a long and dragged out process, and the captives were left to watch and listen as their family members were killed right next to them.

And, perhaps the most devastating sight of all...

The matriarch of the group, who had been circling the others and "rubbing up against members of her family" for reassurance and comfort, was spotted floating lifeless by the boat.

You can watch the footage of the hunt here.

And, though it's a difficult and heart-wrenching watch, it highlights just how absurd the archaic tradition of dolphin hunting is, and why the Japanese government need to take action against the cruelty once and for all.