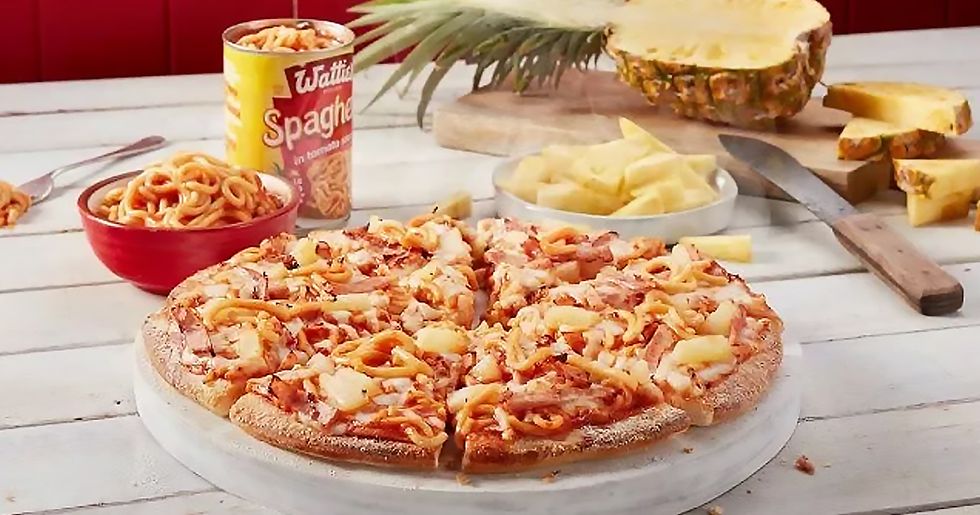 Yes, you did read "Hawaiian spaghetti pizza." Domino's is venturing into uncharted territory with this bizarre new addition to the menu, and people have questions. The first question is probably "why?" but the company isn't answering that one yet.

This isn't the first crazy pizza flavor we've seen, nor will it be the last. But there's something really gross about this combination of toppings. And the pizza's name doesn't even list all its ingredients. Yes, it gets worse. Bet you didn't think that was possible!

We can answer at least some of your questions here. Keep reading to explore Domino's bizarre new dish...

To make this strange pie, Domino's has actually partnered up with a food manufacturer called Wattie's.

That means spaghetti from a can.

So for the full list of ingredients, we've got pizza crust, canned spaghetti, pineapple chunks, glazed ham, and mozzarella.

“This is no joke! We’ve officially added Hawaiian SPAGHETTI pizza to our menu for a limited time only, with help from our friends at Wattie’s NZ! (no April Fools this time)," Domino's posted on its Facebook page.

Not that most of us will be able to sample the thing in person.

The pizza is launching for a limited time exclusively in New Zealand. For now, anyway (gulp.)

So New Zealanders have that to look forward to.

I'm not sure why they would look forward to it, but hey, to each their own--right?

Facebook users had some divided reactions to the news.

I’d rather lick the floor of a bus. -Sam Flynn That is...a very strong opinion right there. I mean, I'm not partial to this recipe, but licking a bus instead? Uh, no.

Some people had enthusiastic suggestions.

Why stop at spaghetti??? BAKED BEANS ON PIZZA I SAY!!!! -Traci Johannessen Hey, whatever floats your boat!

For some people, it brought back childhood memories.

My Childhood right here when my mum was too lazy to cook a proper meal. I even do it for my kids sometimes too. -Jazz Gibbs

So spaghetti on pizza is a little more normal than you'd think.

That’s what our homemade pizzas were - loved them! -Bernadette Ballard Huh, spaghetti on pizza. I can see that--we do it with mac and cheese, after all.

And other people were just surprised that Domino's went for it.

You legends actually did it. -Miguel Ronaldo R. Mendoza To which Domino's cheerfully replied, "That's right!" Well, I guess even chain restaurants can be a little avant-garde.

Pineapple on pizza is controversial.

It's always been highly contested as a pizza topping--you either love it or hate it. And some people really hate it.

In 2017, Johannesson visited a school in Akureyri, Iceland, and one student asked him what he thought of pineapple on pizza.

It's an interesting question for a President.

Gotta ask those hard-hitting questions and all, I guess! Students asked about everything from food to favorite soccer teams.

But Johannesson's opinion on pineapple pizza really stood out.

Because apparently, he went on quite the rant prepared. Johannesson even said he'd ban the topping if he had the power!

Now that is true loathing.

I wonder if any other political leaders secretly dream about ridding their country of that troublesome pineapple pizza?

Around the same time, we got a new pizza topic to argue about too.

And that topic is soy sauce. Yep; in 2017, this weird trend of dipping pizza in soy sauce started circulating social media.

Some people genuinely loved the combo.

Like tennis player Genie Bouchard, who was really feeling that soy sauce pizza at the time.

Including...DiGiorno? I would've thought a pizza company would be the first to say "don't knock it 'till you try it."

Others did investigative reporting.

Their final pronouncement was basically: "Meh."

Let's look at some other oddities in the world of pizza.

Because even if that Hawaiian spaghetti sounds like the weirdest of the weird, you just know there are so many other strange toppings out there.

So, durian is a fruit. Fun fact, a lot of people describe durian as “smelling like hot garbage." That doesn't stop C Fruit Life in Queens, NY from tossing it on a pizza, though!

Denmark has one topping that's...kinda scary.

They serve pizzas in Denmark with actual horse meat on it!

Costa Rica has an unorthodox fave.

The country's most consistently favored topping is actually coconut. Strange as that would be here in the U.S., Costa Ricans love it!

Lobster on pizza isn't super common, but it's not unheard of either.

Sure, lobster meat on pizza. It's easy to imagine that happening in seafood-heavy places. But the weird part isn't that--it's the pizzas with whole lobsters on them!

How does that even work?

There's...a whole lobster just sitting on the pizza! That must be a real pain to cut with a pizza roller.

Australia's also got some sad toppings (a la Denmark).

Australian pizza toppings can include kangaroo, emu and crocodile meat. Wait, what?!

That's not to say the U.S. doesn't get weird.

Gotta love all the freedom you get with pizza.

Every country has its own interpretation of what pizza looks like, and it's really interesting! Until someone starts putting canned spaghetti on it, that is. Share this story with other pizza-lovers out there and see what they think of this bizarre new dish!