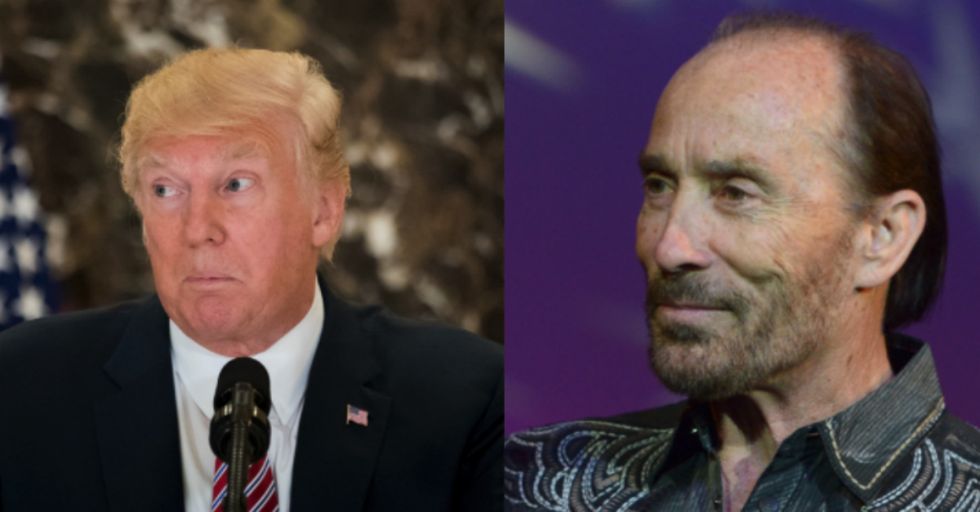 At this point, we should probably just have the Benny Hill theme song playing on a constant loop.

Earlier this week, Donald Trump bragged about his Ivy League education and his all-time great memory. This morning, he managed to screw up something as simple as a birthday message.

There are only two parts to a birthday message. You say, "Happy birthday" and then you say the person's name. It's a simple task, but if there's one thing we've learned over the past 352 days, it's that we should never underestimate Donald Trump's ability to completely bungle even the most uncomplicated assignments.

Donald Trump started today off the way he appears to start most days: on Twitter. He tweeted about Fox and Friends, Paul Ryan, JFK, Taxes, budgets, and Russia. He also shared this birthday message:

It's nice, right? Now, you may be wondering: Who the heck is Lee Greenwood 83? And why is Trump wishing him a happy birthday?

Well, Lee Greenwood is the name of the man responsible for this song:

Ah, yes. Who could mistake the singer of this most saccharine patriotic tune? Well, the president could.

And check out some of the other tweets he's shared on his account:

He certainly doesn't seem to be a fan of Mr. Trump. Also? It's probably not even his birthday.

Trump deleted the erroneous tweet after about an hour and managed to mention the correct Lee Greenwood in the next one. The one with the blue "verified" check mark that denotes someone is famous for something like writing a very, very popular song.