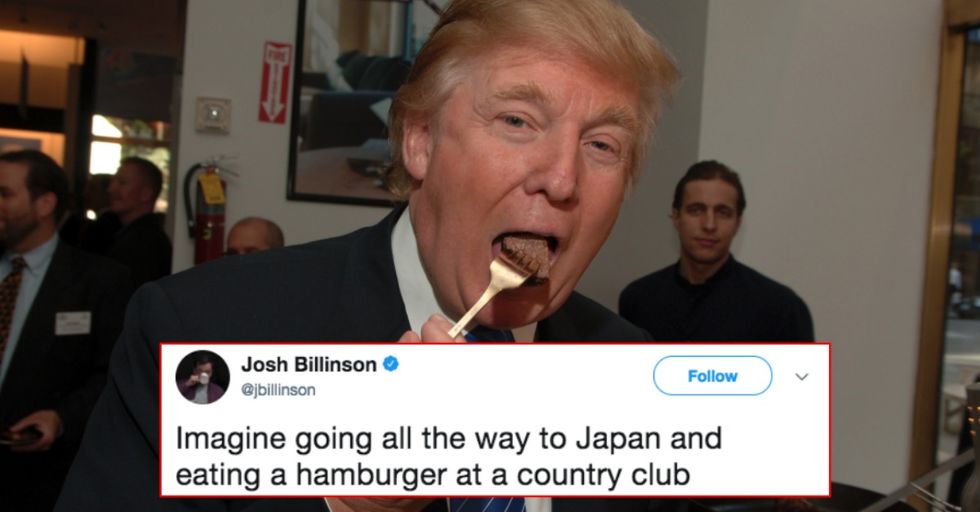 The Obamas mostly requested very healthy meals while in the White House.  But Donald Trump's favorite meal is in pretty stark contrast to that...

Let's have a moment of silence for all the vegetables in the White House garden that Michelle worked so hard to cultivate that are probably going to waste. Michelle dedicated her LetsMove! campaign to reducing childhood obesity by promoting healthy eating habits and exercise.

He's not encouraging kids to eat vegetables, that's for sure. Obama's joke from the 2016 White House Correspondent's dinner is not far from the truth.

Hamburgers are Trump's food of choice.

When Trump traveled to Japan in 1990, he wouldn't eat any "f*cking raw fish", according to a report by Newsweek. Instead, he went to McDonald's for a hamburger. And it looks like he didn't stray far from old habits during his most recent trip to Japan. This time he upgraded at least one of his meals to a country club burger.

The article said that Trump asked the White House Kitchen to try and replicate McDonald's products,  but the White House kitchen supplies were too high quality to really measure up. Trump regularly sent Schiller out for late night McDonald's runs instead.

What does Trump's Happy Meal consist of?

His meal of choice is two quarter-pounders with cheese, no pickles, and extra ketchup. He also gets a fried apple pie for dessert. A former Trump aide said that during the 2016 campaign, Trump used to get two McMuffins in the morning, two quarter-pounders in the afternoon, and a large fries later in the day. The aid would run into the terminal at an airport in New York while Trump waited in his Limo outside. Trump's certainly not pretending to encourage healthy living, that's for sure.