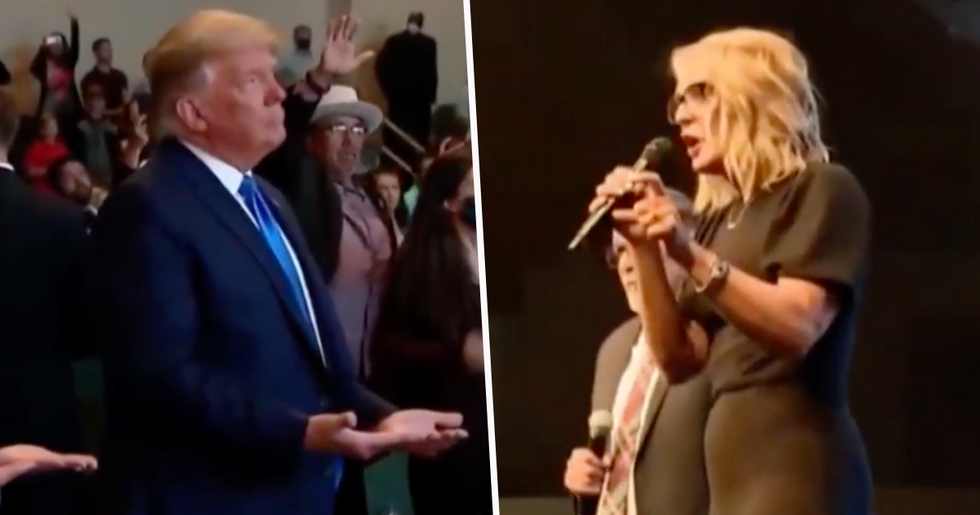 A Las Vegas church pastor has spoken to God and given Trump exactly what he wants...

It looks like President Trump has got the go-ahead from the almighty himself...

And Trump is lapping it all up.

It seems as though the president became part of the church-going crowd this weekend...

The pastor was so moved by the whole experience, she spoke directly through God, telling Trump something pretty significant.

But it seems that he has some serious competition from his Democratic rival, Joe Biden.

6 subjects were set by Wallace to be discussed that evening...

The Trump and Biden records, the Supreme Court, the COVID-19 pandemic, the economy, the issue of race and violence in cities, and the integrity of the election. But despite these firm rules, the pair just seemed to focus on personal insults... and even familial issues.

Despite his health worries, Trump has made it clear he's perfectly fine to go to rallies and public events...

With the latest venue being a packed-out church.

Trump attended a Sunday service at the International Church of Las Vegas, with Pastors Paul and Denise Goulet.

Trump could be seen stood awkwardly with his palms out, with Hope Hicks and Kayleigh McEnany on either side of him, nobody wearing masks.

Although the president's presence was what drew in the crowds, it's what Pastor Denise said that stole the show.

The president reached into his pocket and made a cash donation during the portion of the service where the congrega… https://t.co/2qqTKYpZlK
— Kelly O'Donnell (@Kelly O'Donnell)1603039885.0

She said she got a sign from God at 4:30 on Sunday morning that Trump will win the coming election. But she had a funny way of saying it...

It was almost like a stream of consciousness, saying a "second win" would come through a victory at the polls; next, she said he'd get another "second win."

All the while getting increasingly out of breath.

Pastor Denise then wrapped it up saying he'd get a second "wind," which she compared to the holy spirit.

Obviously, Trump was loving it.

The pastors eventually invited Trump to the stage to bless him...

Which was pretty awkward, and if that wasn't enough, they handed him the mic to give a small speech.

And to thank the pastor for her kind words, he responded in true Trump style...

He told them they were rough around the edges. Nice. For more updates, keep scrolling...