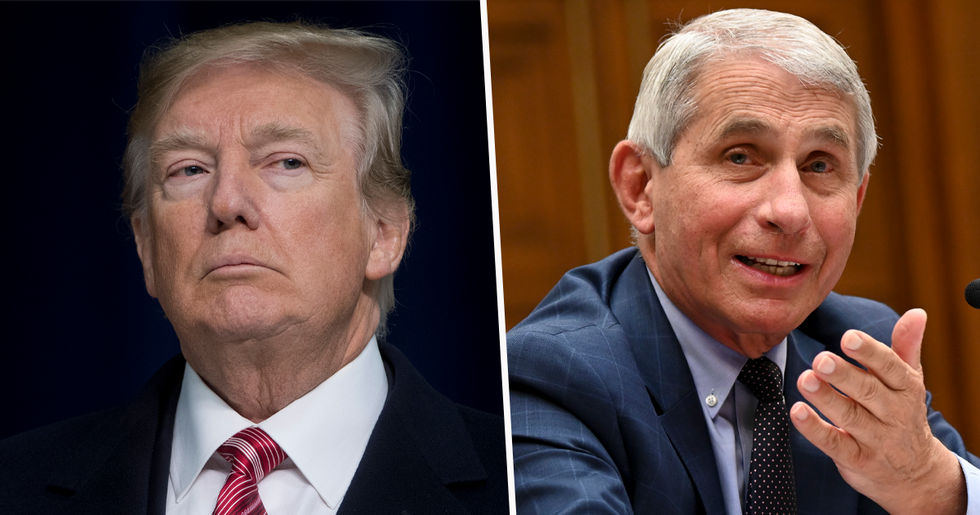 Donald Trump really doesn't like it when he's contradicted about coronavirus, about the election, or anything else for that matter. The latest victim of his name-calling is none other than Dr. Fauci, who recently exposed some White House truths...

Donald Trump has recently been exposed after a staff call was leaked.

And of course, it ended with name-calling, as per usual.

But this time, he attacked Dr. Fauci and no one's taking it well...

Calling one of the top medical advisors in the country an "idiot" probably wasn't the best way to go about things, especially when he's helping research to minimize deaths from the coronavirus.

The president should appreciate that more than anyone since his diagnosis.

And there's no doubting how the news shocked the entire world.

The president immediately went into quarantine with the First Lady...

And many hoped that this would be an opportunity for Trump to finally start taking the pandemic seriously.

This was to little avail. Even though the president was admitted into the Walter Reed National Military Medical Centre, he discharged himself just days later trying to claim he felt "better than ever."

Trump supporters were obviously delighted by this news...

But the president's constant reassurances about how well he was feeling raised a lot of suspicions.

Many felt it was all an act...

And along with no sign of a negative test, Trump felt it was necessary to address the nation with an update on how great he was feeling... oh, and he also decided to tell millions of Americans to "not fear the virus" and to learn to "live with it."

It was all very concerning...

And people were feeling extremely alarmed at the president's relaxed attitude toward a virus that has so far killed more than 220,000 American citizens.

Trump even tried to claim he was "immune" from COVID...

And that testing positive for it was a "blessing in disguise sent from God."

The president then made a promise to give any American with COVID "free healthcare"...

Which is an extremely unrealistic promise, we must say, and how sure can we be on trusting Trump's word?

Well, just a mere 2 weeks on from Trump's positive test, he was out and about holding rallies for his presidential campaign...

And as you can see, there have been barely any face masks in sight amongst the hundreds of supporters gathered for his rallies... even though the president jokingly threw a few into the crowd!

Trump seems to be in good spirits as he continues to power on through his presidential campaign...

And even though the second scheduled presidential debate was canceled due to him refusing to take part in a health and safety restricted virtual debate, Trump went ahead with his own town-hall forum in Miami.

And not to mention, he's been on a national tour, to attend rallies.

And that's a whole other story.

You can hardly call this politics anymore, can you?

During a staff call that was leaked, he referred to the doctor as an "idiot." But that's not all...

Tensions have been building between the pair for a while now but has finally hit boiling point.

Dr. Fauci was interviewed by 60 Minutes and was asked some pretty tough, on the spot, questions, which he answered pretty honestly it seems.

And this has riled up the president, who clearly didn't appreciate any of his responses.

At one point the expert was asked if the White House was controlling when he could speak with the media and he replied "yes." Yikes.

He also discussed the whole "war on science," claiming Trump had re-ignited that debate through his nonchalant behavior.

Obviously, Trump did not take well to his comments and proceeded to hit him with a wave of insults.

As reported by CNN, who was given access to the call by a source, he said this:

He also (sarcastically) referred to Dr. Fauci as a "wonderful sage" who's been around for "500 years."

Not to mention suggesting that he was one of the "idiots" that advise the White House and the public. He even said that people were "tired" of seeing the guy. Now that did not sit well with people at all...

And with only 14 days left until the election, he can't afford to be having these sorts of slip-ups. Keep scrolling to see what Trump rallies are all about...