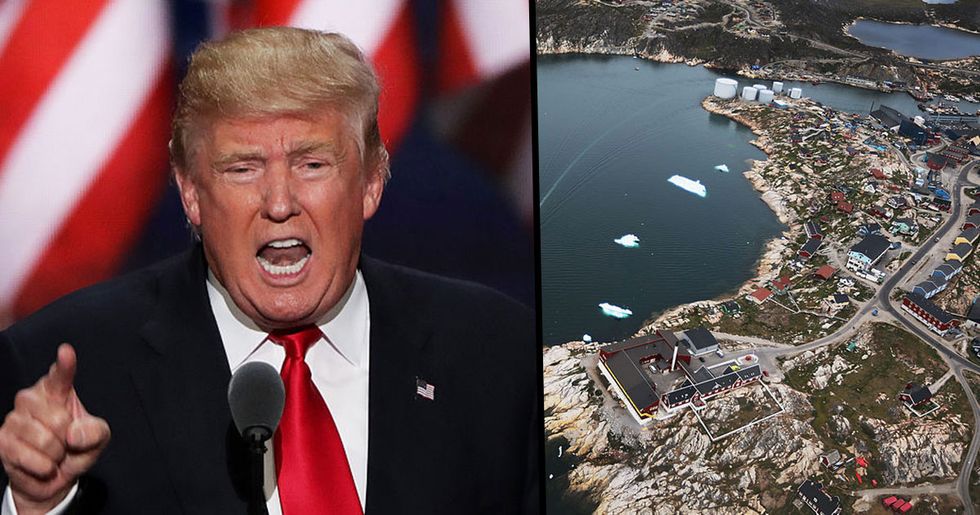 President Trump isn't actually the first U.S president to have dreams of purchasing the paradise that is Greenland. In actual fact, President Truman had his eye on the massive island that's wedged between the North and Atlantic Oceans in 1946.

The thing that both presidents failed to realize was that Greenland isn't for sale. Just like the pale, shiny mannequins displayed in Macy's window displays, this icy land with a population of just over fifty-six thousand cannot be bought for any number of gold coins.

Truman made his peace with this, but it seems like President Trump might need a cooling-off period. Eh, we can't always get what we want, Donald. Why don't you go buy yourself a new golf course instead?

Did Trump want Greenland so that he could build a golf course?

Although I'm sure that Trump would love to build a golf course on Greenland, that was not his primary objective when making the purchase. When asked, he claimed that he wanted to buy Greenland becuase, "essentially it's a large real estate deal."

Is Greenland a part of Denmark?

Well, despite what Trump seemed to think, Denmark doesn't exactly own Greenland. While Greenland is one of the three constituent countries that make up the Kingdom of Denmark (otherwise known as the Danish Realm), the island is self-governed. Greenmark has been under its own rule since 1979.

What has Greenland got that the U.S. hasn't got?

One of the reasons that the U.S. has been interested in Greenland for so long is the island's natural resources. Greenland is rich in natural minerals such as coal, zinc, copper, and iron ore.

The U.S. has been interested in Greenland since World War II.

The island proved to be of great geopolitical interest to the U.S. during World War II. As the Island sits along a direct route from Europe to North America, it's an ideal position for U.S. military bases.

After the Second World War, in 1946, President Harry Truman offered Denmark $100 million for the territory.

Truman also toyed with a trade.

Before making his offer of $100 million dollars, the president had apparently toyed with the idea of swapping some areas of Alaska for the island.

President Truman's offer was not accepted.

That being said, the U.S. was allowed to build the Thule air force and radar base there during the Cold War and the U.S. now uses the area for surveillance and as a missile early warning system.

Can you really just buy countries?

Actually, you can, and the U.S. has done it a fair few times.

The U.S. bought The Virgin Islands from Denmark in 1917.

In what could certainly be considered a U.S. Hollwyood blockbuster of a trade deal, the USA originally tried to buy the Virgin Islands from Denmark for $7.5 million back in 1867. This was all going to go ahead until there was a massive hurricane on the islands, and, like your typical U.S. customer, the Senate wanted a discount since the "product" had been "broken." In 1900, the U.S. offered to buy the island again, for the reduced price of $5 million. Denmark wasn't willing to go that low and refused the offer. It wasn't until the pressure of World War I and the USA's need for the islands that the two countries finally reached an agreement. In 1917, the U.S. purchased what is now known as the U.S. Virgin Islands for $25 million dollars.

As part of America's expansion, they bought Arizona, and what is now called New Mexico in a treaty with Mexico in 1854 for $10 million dollars. This is known as the "Gadsden purchase."

But... how come Greenland is not for sale?

Although, prior to Greenland becoming a self-governed island in 1979, the sale could have been possible, to suggest that it can be bought now is a bit of a fantasy. Those who are aware of the legalities of such a deal have questioned Trump's logic. The Danish prime minister, Mette Frederiksen, said that Trump's suggestion was "absurd" and declared that she hoped that "Mr. Trump was not being serious."

Sometimes, it's difficult to tell whether Trump is being serious.

On Tuesday, Trump tweeted, basically @ing the people of Greenland, saying that he promises that he won't build a solid gold Trump Tower on the island, and it's no surprise that the people of Greenland failed to see the funny side. And it's certainly no surprise that the politicians in both Denmark and Greenland are struggling to understand whether his desire to purchase is serious.

The former Danish Prime minister thought Trump that must be joking.

When The Wall Street Journal first broke the story that Trump was interested in purchasing Greenland, Lars was not the only political figure that thought that the president must have been joking.

Because, if he's not joking, perhaps he has gone mad...

When discussing Trump's plans to national broadcaster DR, Soren Espersen, foreign affairs spokesman for the populist Danish People's Party, stated that: "If he is truly contemplating this, then this is final proof that he has gone mad."

The notion that Greenland's resources are there for the taking offended many.

Trump might try to sell the project to Americans as a deal that will provide the U.S. with lots of great things, but surely anyone can see that it's the geopolitical equivalent of stealing a bracelet from a frail old woman to give to your already over-indulged girlfriend?

Also this plan to buy Greenland proves that Trump has no intention to try to battle global warming.

Currently, most of Greenland's minerals are unattainable under large amounts of ice. According to Vox, Trump's fantasy of mining Greenland spells out one thing (besides greed and entitlement, of course): the president doesn't give a monkeys ass about the planet. Or, as Vox reporter, Matthew Yglesias, puts it: "A vision of American public policy that is neither interested in halting the warming process nor concerned about the environmental impact of exploring the resources would naturally want to acquire such a potentially rich land."

Greenland has spoken up for itself.

Naturally, the people of Greenland have not appreciated the round table of other countries discussing their fate, despite having had "home rule" since 1979. In 2009, Greenlanders even voted for the Self-Government Act: "A transition plan to have all power except for foreign affairs and defense transferred to Greenland locally." This is an island that has worked hard to get its independence. Understanding this, you can surely understand how offensive Trump's plans to acquire the land truly is.

Despite Trump stepping on toes (as usual), Denmark was still gracious about his upcoming visit.

Just hours before Trump's rude cancellation, the U.S Ambassador to the Kingdom of Demark, Carla Sands, tweeted, saying that Denmark was ready for Trump's visit and that the nation considers him an ally and a friend. I mean you can't get fairer than that, right?

Still, Trump didn't get what he wanted, so...

Don't expect him to come and visit your stinking country!

I mean, he didn't exactly put it like that...

But the president's pettiness really is hard to ignore.

Google search: How to subtly uninvite that guy who always spoils the party.

Actor, George Takei, has a novel idea for other nations not wanting to host the president. I'm sure that many Brits would love to inform Trump that Scotland is not for sale either!

Maybe this German Newspaper's solution would cheer up the president.

The show always was good at its absurdist story arcs.

"The reality is stranger than fiction."

... No, it's all one big prank for the upcoming Simpsons movie, duh. Don't worry. But perhaps the knock to the US's reputation should worry us a bit. A rough translation of the Danish Center-Left Party Leader, Morten Østergaard's, response to Trump's recent actions read: "Reality transcends imagination. There can hardly be one in the U.S. Department of State who could not have told Trump the answer in advance. It shows why, more than ever, we should consider the EU countries as our closest allies. The man is incalculable."

Trump seems to have offended the whole spectrum of Danish politicians.

From center-left to far-right. Søren Espersen, a member of the far-right Danish party, Dansk Folkeparti, shared in Østergaard's anger and claimed that Trump was wasting their time.

Heck, Trump sure is having one hell of a Wednesday.

Can destroying foreign relations, bullying The Squad, being anti-Semitic, and being a general numpty thinking that he can buy Greenland warrant impeachment? As for what's going on with Trump - maybe he's got the flu, like me? Try lemon and honey, Mr. T, works a charm...

So, how did Trump announce his decision not to go on with his planned visit to Denmark?

Oh, by tweeting about it, of course.

Trump's "abusive partner" tactic might be in the works...

I've got an inkling that Greenland (who owns Greenland - in case you still hadn't grasped that yet, Trump...) won't succumb to his bullying ways. But, eh, as we pointed out earlier, you might be able to get your little hands on broken Britain post Brexit! Jolly good.