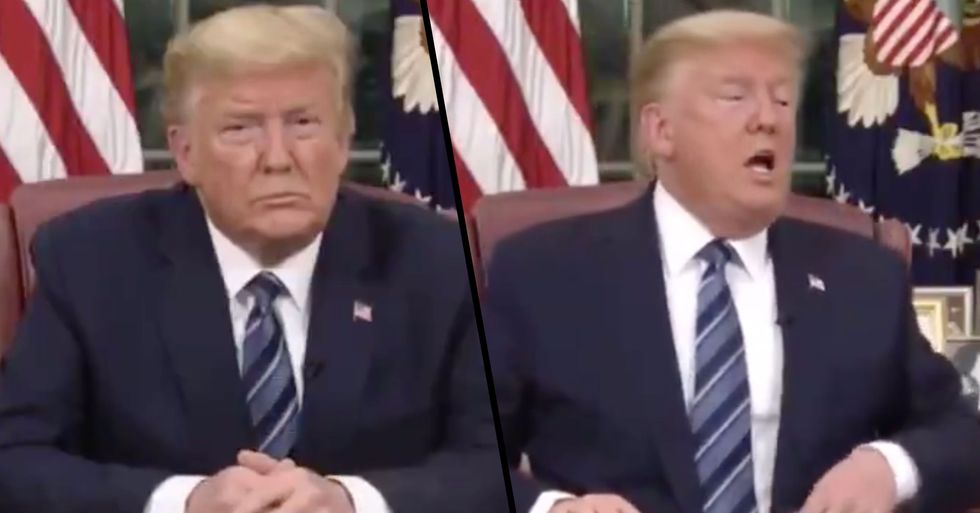 Is there anything that our President can do right nowadays?

Although you have to hand it to him, he has definitely created his fair share of comedic material. Now he's been caught doing something hilarious, and people can't stop watching.

Keep scrolling if you're not afraid of awkward eye contact...

The President is no stranger to mockery...

via: Animation on FOX

It seems that The Simpsons were trying to send a message to the President...

And it's safe to say that the President hasn't really changed much, not when it comes to being mocked by the media anyway.

He has come under fire once again.

This time Trump was caught swearing into a hot mic moments before he was due to give a speech about his response to tackling the coronavirus.

It was during a press conference yesterday.

The President spoke at the Oval Office, announcing a travel ban for thirty days to and from Europe.

In the wake of the outbreak.

The speech was live-streamed on C-SPAN.

What the President didn't know is that the millions of viewers were about to witness the moment he lost his cool.

They did him dirty.

The people in charge of Trump's microphone turned it on too early, resulting in viewers getting an insight into the POTUS' speech prep.

It was broadcast to the nation.

It's thought that he must have been checking his appearance because through the mic, he can be heard sighing: "Oh f*ck. Uh oh, I’ve got a pen mark."

It went downhill from there.

The President then went on to ask for "white stuff," that we can only imagine is some sort of Wite-Out gel, in order to cover-up his stain.

Something must have worked.

When he appeared on screen, no white mark can be seen. That's the power of television, my friends.

We can't really blame him for swearing.

I can't imagine how stressful it must be to give a speech about his plan against a worldwide pandemic.

The speech was important to all of us across the U.S. not just because the world has been left in a panic, but because of the spread of miscommunication about the virus.  It was clearly important to him to look in control when giving his speech.

However, many of us were still left confused by his plan.

After his announcement, Trump had to take to Twitter to clarify that he was only stopping travel and not trans-Atlantic trade in goods.

This was the cherry on the cake.

After the questionable performance from the President, C-SPAN left the cameras rolling for a good few painfully awkward seconds before shutting down the stream.

He was just sat there uncomfortably.

The shared moment between Trump and a good few million viewers lasted ten 10 seconds too long, and we can only wonder what was on the President's mind. Although, it was more than likely to do with his pen mark.

The stream did provide some light relief.

Although he isn't the most reliable person to turn too in times of panic, he does provide some much-needed laughs. No doubt he's given more than his fair share of comic material for future TV shows.