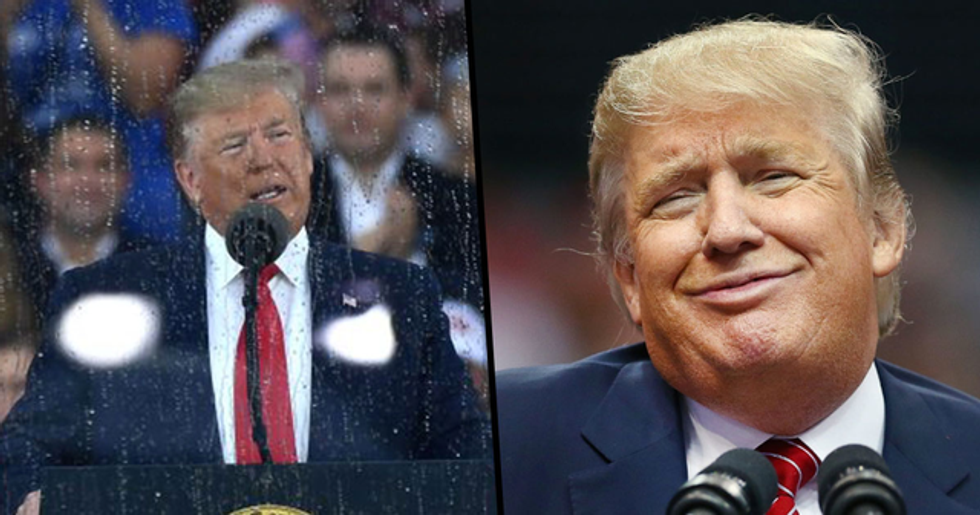 Donald Trump attended the Lincoln Memorial in Washington DC as part of his 4th of July “Salute to America” celebrations. During his visit, he gave a lengthy speech in which he discussed and celebrated America's many achievements and victories. So far, so good, right?

But, let's be real: It wouldn't be a real Donald Trump speech without a few blunders.

People were quick to notice that Trump's claim that the Revolutionary Army took over airports in 1775 was slightly problematic... Mainly due to the fact that there were no airports in 1775. Yikes.

Keep reading to hear his full speech, or just revel in his hilarious mistake. It's good fun either way.

Independence Day commemorates a historical landmark for our country.

It marks the day that we were finally freed! On July 4th, 1776, the Continental Congress declared that the thirteen American colonies were no longer in the grasp of the British Monarchy.

We became an independent country.

As history books will tell you, the Brits had a little habit of colonizing pretty much anything that moved. So it was much to their despair when the American Revolution prompted our independence, meaning that we were no longer part of the British Empire as of July 4th, 1776.

The 4th of July is perhaps the most patriotic day of the year, and people across the country come together to celebrate and remember the Revolution with parades and parties.

Historically, the day was marked with gunshots.

The celebrations started 1 year after independence, with a 3 gunshot salute in Rhode Island. Fast forward a couple of hundred years, however, and celebrations are bigger than ever, with huge parades, street parties, and firework displays.

And this year marked a different type of celebration.

For the first time in nearly seventy years, a standing US President addressed the country with an hour-long speech celebrating Independence Day. Traditionally, past US Presidents have chosen to keep a low-profile during the celebrations, as much of the country prefers to take part in less politically-driven activities on this day.

But, of course, Trump put himself on the centre stage this year.

Always one to use any event as an opportunity for self-promotion, Donald Trump threw a lavish celebration ceremony. His event was held at the Lincoln Memorial, which honors President Lincoln, who won the civil war and helped to end slavery. It was also the site of civil rights leader, Martin Luther King’s “I have a dream" speech a century later.

He dedicated the celebration to the US Military.

The celebration featured military bands and flyovers from the US Navy's Blue Angels and Air Force One, the modified Boeing 747 that transports presidents, and a display from M1 Abrams battle tanks. As well as his speech at Lincoln Memorial, there was a grand firework display to close the evening.

Though he has faced criticism for his extravagant display.

Critics feared that Trump would be unable to resist turning the usually-nonpartisan celebration into just another politically-driven campaign rally.

And the cost didn't go unnoticed...

With Trump boasting that his Independence Day celebration would be the "biggest in the history of our country" earlier this week, people couldn't help but wonder who was funding it all. According to The Washington Post, $2.5 million was diverted from the National Park Service to cover the costs of Trump's garish parade. Those funds, which were raised from entrance and recreation fees, were originally intended to help revamp parks across the country. The White House has refused to comment on the cost.

Though the event appeared to be a great success.

Much to his delight, crowds of Trump supporters descended upon the event and packed out the Washington Mall. And, once his speech had begun, many people were relieved, and somewhat pleased, to see that the president was avoiding his usual angry political ramblings, and was genuinely paying a heartwarming tribute to our country.

He gave a hugely patriotic speech.

Keeping the military at the forefront of the topic, Trump discussed its history and paid tribute to each branch of the military in turn. He also outlined the history of Independence Day and gushed over a variety of different American achievements.

Though, of course, his speech raised a few eyebrows.

Ah, classic Donald. It seems that the president can't ever give a speech without making sure that there's a couple of errors thrown in there.

The president made a few awkward mistakes during his speech.

And his second mistake was even worse...

Okay, Alexander Bell's nationality has been confused in the past. We'll let that one slide. But this blunder was just embarrassing.

He made the historical gaffe while discussing the history of the US military.

It started well. Trump said during his tribute to the army, “In June of 1775, the Continental Congress created a unified army out of the revolutionary forces encamped around Boston and New York … The Continental Army suffered a bitter winter of Valley Forge, found glory across the waters of Delaware, and seized victory from Cornwallis of Yorktown."

But he then seemed to get some important dates mixed up...

By a couple of hundred years, that is. He continued, "Our army manned the air, it rammed the ramparts, it took over the airports, it did everything it had to do, and at Fort McHenry, under the rockets’ red glare, it had nothing but victory." In case you missed it: Air travel did not occur in the US until early in the 1900s. The Wright brothers, whom Trump had actually praised earlier in his speech, flew the world’s first plane in 1903. So, there were certainly no airports in June 1775.

And that wasn't his only historical mix-up.

As some eager listeners picked out, the battle of Fort McHenry occurred during the war of 1812, not the American revolutionary war, which actually took place several decades earlier.

Though the internet loved it.

Trending as #TrumpParadeFail, people took to Twitter to share their amusement over the situation and, I have to say, there are some excellent photoshop responses.

Some people proved that even children are smarter than the president...

Puts it into perspective, doesn't it?

You can watch his aberration here.

When will this end?!