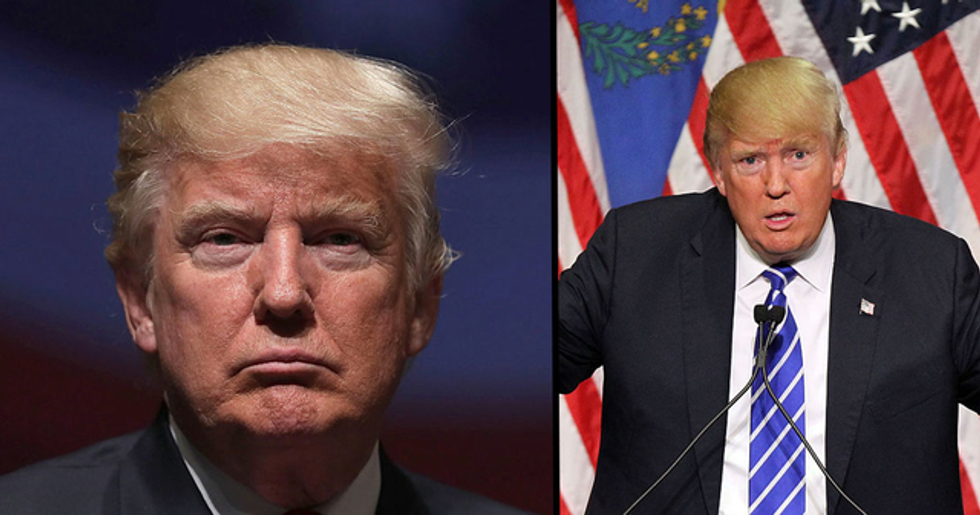 When you think of Donald Trump, a few different things might spring to mind. Some problematic policies, perhaps, or an attitude which, if it were described as "arrogant," would be an understatement. But another huge aspect of his persona? That incredible hairstyle.

He's rocked his signature side-parted bouffant style for many years. In the past, it seemed to be a stylistic choice - but now, as he ages, many suspect that his look has veered heavily into comb-over territory. It had started to look a little tragic - but now he's responded to the criticism by opting for a whole new style.

The forty-fifth (and current) President of the United States of America is known for dividing opinion in a variety of ways. Many of these have to do with his extremely conservative politics.

But his policies aren't the only way that Trump makes a statement.

He's also got a very distinctive appearance. He's almost never seen without his signature deep tan, plus, he almost exclusively wears either suits or golf outfits.

But there's something else that makes Trump stand out.

He has one of the most iconic hair 'dos of all time - but the jury's still out on whether that's a good or a bad thing.

Trump has rocked this 'do for as long as we can remember.

Even when he was a relatively young man, he opted for his signature deep side-parting. But what really makes this look so infamous is how heavily styled (and sprayed into place) it seems.

But Trump still has the same look that he did forty years ago.

Which has led some to consider that it may not be a look that he's stuck with by choice, but by necessity. Some suspect that he's covering up a balding head, attempting to distract us with his bizarre style.

Either way, it's a look that Trump is totally synonymous with.

In fact, many of us will immediately picture this signature hairstyle when we try to bring Trump to mind. Which is, we guess, the sign of a memorable look.

The hair itself is something of an icon.

Even when you see an image of it alone, you immediately know that it belongs to POTUS. Many can't even imagine what Trump would look like without it.

Jimmy Fallon even attempted to disrupt his hair (and solve the mystery as to what was actually underneath), but the hair bounced back suspiciously quickly.

But the internet still has its suspicions.

This clip of Trump removing a baseball cap appears to suggest that there is a distinct lack of hair underneath, although we are sure that Trump would disagree with this statement.

But whether the hair is a balding cover up or not...

There's no denying that Trump's hairstyle is instantaneously recognizable - and certainly one of a kind. Whether you love him or hate him, you must admit, his hair is a feat of engineering.

And, as you may expect with such iconic hair, the internet is kind of obsessed with it.

There's plenty of top-quality Trump hair-related content online, including this cleverly made GIF which shows it gradually fading and disappearing from view, leaving a totally bald Trump behind.

And many enjoy a different genre of Trump-hair jokes.

There's a plethora of excellent comparisons between Trump's hair and various bizarre objects online. This one, which points out incredible similarities to a pretty weird-looking caterpillar, is one of our faves.

And this one is even more odd.

As a President who has been accused of spending too much time on Twitter, is it a mere coincidence that his hair looks so similar to the Twitter logo? Well, probably - but it's still interesting.

Trump's hair has been the butt of many jokes over the years.

Including this classic from back in the good old days, when Trump was just a presidential candidate, and everyone thought it was just a bit of fun.

And, as you'd probably expect, UK Twitter has had some hilarious responses to the visit.

Including one surprise troll.

Sky News, one of the biggest broadcasters in the UK, managed to pretty much summarize how seriously the rest of the world seems to take Trump.

In fact, the whole of the country seems to agree on one thing.

No one is keen on Trump's arrival on their turf - as expertly illustrated by this artistic bit of lawn-mowing.

But there has been an unexpected bit of news shining out of this story.

Trump has done something that the whole world seems to think is actually kind of good. As you probably understand at this point, a unifying move like this is totally unexpected from Trump.

But don't get too excited.

Because the positive move Trump has made has nothing to do with any sort of politics or international relations. It's an altogether more superficial issue.

How has Trump has managed to get everyone on board?

Why, by fixing his weird hair, of course! This weekend, the President debuted a whole new look - and the internet is kind of loving it.

Many are shocked for one reason in particular.

We're all so used to Donald Trump's hair looking one particular way, which is, let's face it, a little messy and totally ridiculous - this new look is far sleeker and tidier.

He was attending a church service in Virginia when he debuted his new style.

Trump takes off his cap and reveals his non comb over hair for the first time. And of course it actually looks bett… https://t.co/MJIeKuqLaB
— Mike Sington (@Mike Sington)1559518434.0

And it was quite the reveal - he entered the church wearing a classic Trump baseball cap. But when he took it off, what he had underneath the hat became abundantly clear.

Donald Trump channeling Biff Tannen from Back to the Future with new slicked back hair.... #Trump #DonaldTrump https://t.co/q4cuzXoNjG
— Mark A. Thomson (@Mark A. Thomson)1559537896.0

And, in spite of the fact that most people kind of like it, of course, Trump wasn't going to escape without at least some jokes made at his expense.

This one is a personal fave.

Although it's hard to deny that Trump's hair looks better without the excessive styling and hairspray, his new look is a little too alarmingly familiar - and the comparisons are not flattering.

Although some Twitter-users have pointed out one thing.

It seems that, rather than a smart rethinking of a style which is long out of date, Trump's new look is actually just thanks to one thing - yep, it was totally accidental.

However, not everyone was a fan.

It seemed that Trump's suave new look didn't quite translate from every angle - and, from the back, the whole thing looked rather crazy. It seems like a balding cover-up is harder to pull off than you may think.

Having a President who seems so totally obsessed with proving to the world that he isn't bald could be seen as representative of a greater issue - that he's self-obsessed and prioritizes his appearance above other, more important issues.

For a little while, it seemed like Trump's old hair was gone for good.

The idea of the infamous bouffant becoming sentient and making a bolt for it, far away from Trump himself, is a pretty funny image.

But as he lands on UK shores, it seems like this may not be the case.

So far, in the photographs we've seen from his trip across the pond, it looks like Trump has reverted back to his old style. Bad habits die hard, after all!

So what does the future hold for Trump's 'do?

At the moment, it seems pretty hard to say - but we're sure that whatever he ends up going for, the internet will have plenty to say about it.