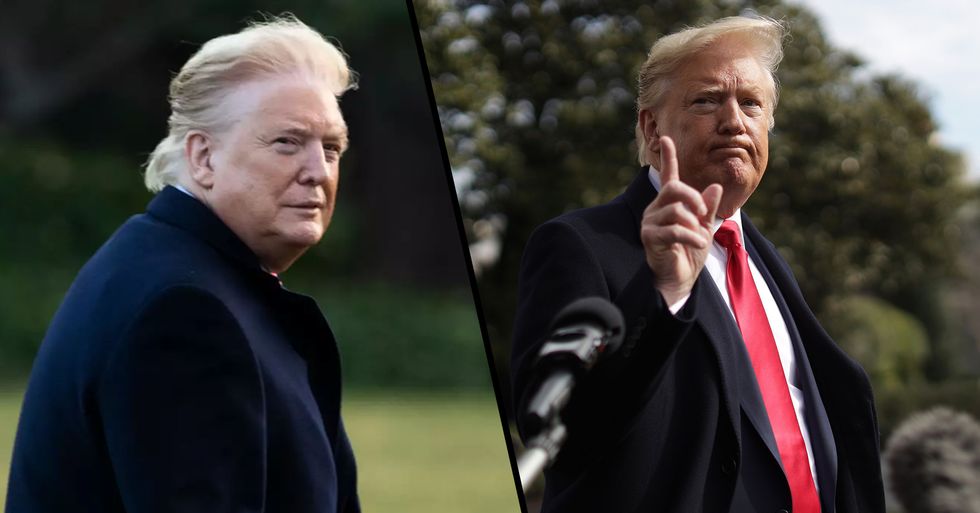 Is there anything that our President can do right nowadays?

When it comes to mocking the President, TV shows and cartoons are the true winners in this game. Old-school cartoons such as The Simpsons are the best when it comes to jokes about the people running our country, but, recently, Sesame Street has creeped out of the woodworks with some classic Trump jokes that date all the way back to the 1980s.

It doesn't take people long to get on board with making fun of Trump...

Keep scrolling to see some of the best twitter posts.

The President is no stranger to mockery...

via: Animation on FOX

It seems that The Simpsons were trying to send a message to the president...

And it's safe to say that The Simpsons aren't the only ones thinking this!

But archives from Sesame Street have caught America's eye...

It turns out that the puppets of Sesame Street have been taking shots at the president for decades, and these nifty little digs appear to have begun emerging in the late 1980s.

These scenes were aired after Trump's attempt to eliminate all funding for the Corporation for Public Broadcasting...

Trump announced this in 2017 in a budget proposal, and, if his plans went through, this would include cuts to PBS and NPR - the channels that aired Sesame Street.

People fought back against Trump's wishes...

According to the Huffington Post, President and CEO of CPB Patricia Harrison said: "Such a decision would devastate and ultimately destroy public media's role in early childhood education."

It's become pretty clear why the president was so eager to make cuts to PBS and NPR...

Watching back, Sesame Street made some pretty apparent and savage digs at the president.

Ronald Grump was a character who made his first appearance in 1988, and it's safe to say, his name sounds pretty familiar.

At first glance, he didn't look much like Trump at all. But then he convinced Oscar the Grouch to let him build Grump Tower on his lot, and even tricked him into signing a contract that required forty bags of trash - which Oscar loves, by the way - should he ever want Grump to leave.

Ronald Grump was even scripted to mimic the president...

In the 25th Anniversary episode in 1994, when Grump made his second appearance, he tried to convince the residents of Sesame Street that the changes that he was making to their neighborhood were for the better. "Hey look, I love you people," Grump said. “You deserve some of the finer things. Trust me, you won’t miss all this." When the other characters protested, he exploded with: "Ok, Ok, that's it! I tried to be nice to you people! But you don’t want to listen? That’s it. You got two weeks. Pack up and leave."

The inspiration behind the character of Ronald Grump is pretty obvious...

Watch the "Grump Tower" episode here and see for yourself!

The episode was titled "Grouch Apprentice" and it showed Grump, the puppet who had "the most trash in the world," slowly become estranged from his fellow puppets when he began bossing them around and firing them for no reason. Ring any bells?

Grump is looking for an apprentice to help sort out all of his trash.

In the episode, Grump says: "I got so much trash I need somebody to help me sort it, and whoever I pick to be my helper gets to keep some of my very own trash! Of course, I'll still have more trash than you do so... nyah nyah nyah nyah!"

Grump, in typical Grump fashion, begins firing the puppets for no apparent reason.

When the unfortunate puppets protest over this unnecessary firing as "they haven't done anything" and how "he can't do that," Grump simply responds: "I just did!"

The resemblance is uncanny...

President Trump has a record for cabinet turnover in a president's first term due to the amount of staff who have been let go or dismissed from their jobs by the president.

Grump's bossy and unreasonable behavior is a clear representation of Trump himself.

We're pretty sure that the president wouldn't be too about these sly little digs...

But we hope that he's seen what the majority of the world thinks about him and his actions, especially as he has been mocked through cartoon characters. But there is some good news for Sesame Street fans, however. Thanks to a deal that was made with HBO in 2015, Sesame Street is here to stay - much to the president's anguish and annoyance!

People can quite easily make fun of him without.

The President has responded after a photo of him went viral.

If you've been on social media over the past few days, you'll know exactly what photo he's talking about.

It was taken on the 7th of February.

His golden locks blowing in the wind, as POTUS made his way back to the White House.

It wasn't his hair that people were interested in...

It was the distinct tan line clearly visible with his hair swept back off his face.

It didn't take long for people to comment on the photo.

The picture quickly became a meme, with thousands of people blasting the President's photo.

The caption to the photo read...

It didn't take long for the shot to go viral.

It was shared alongside many witty captions provided by the general public. Some of the best included: "my man looks like he fell asleep while eating a lasagna," "me after watching exactly one makeup YouTube" and "to underscore his commitment to coal, Donald Trump stuck his face into a blast furnace for a full minute."

Trump has obviously slammed the image as 'fake news'.

Despite the numerous images taken by different photographers, he still claims the image is photoshopped. Trump took to Twitter to share his outrage: "More Fake News. This was photoshopped, obviously, but the wind was strong and the hair looks good? Anything to demean!"

The image that went viral was taken by William Moon.

It's fair to point out that Moon's picture seemed to be darker than other photos taken that day.