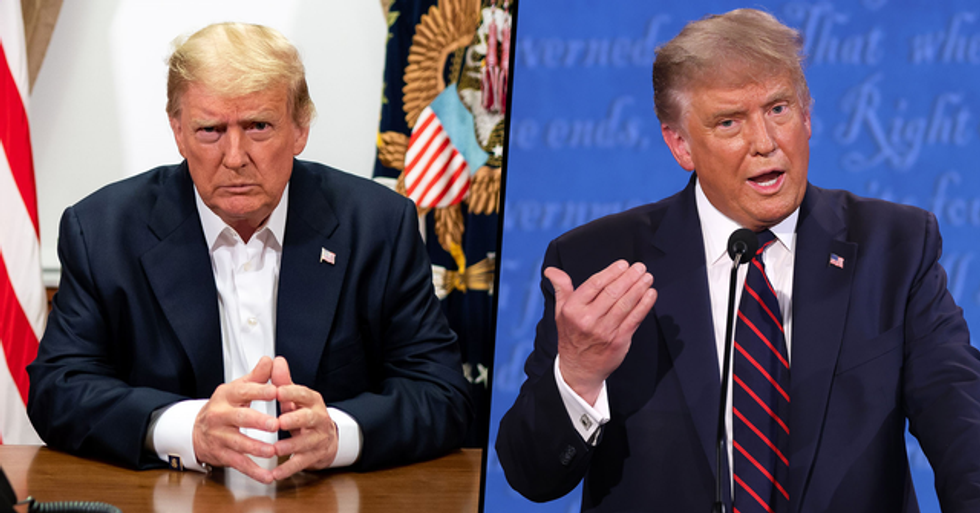 Donald Trump Goes On 'Worrying' Twitter Rant While in Hospital

Trump supporters have been left feeling concerned today after the president went on a bizarre and "worrying" twitter rant while in the hospital...

It's been a perilous time for President Trump.

Last week, it was confirmed that Donald Trump and the First Lady, Melania Trump, had been diagnosed with coronavirus.

So far, the president has seemingly been taking on the virus well within in his stride...

And has given a number of positive and uplifting updates regarding his health and well-being, despite being admitted to the hospital just a few days ago.

But today, fans of the president are a little concerned...

Just a couple of hours ago, Trump went off on a rambling and "worrying" Twitter rant, in which he made some ludicrous and eccentric claims. What's going on?

Now, we were first given the shocking news of Trump's diagnosis on Friday, October 2nd.

Immediately after his diagnosis, the president went into self-isolation.

However, Melania put many minds to rest.

Last week, shortly after their diagnosis, she tweeted this: "As too many Americans have done this year, @potus & I are quarantining at home after testing positive for COVID-19. We are feeling good & I have postponed all upcoming engagements. Please be sure you are staying safe & we will all get through this together."

And, shortly after this, the White House came forward with some reassuring news.

And could even be seen waving to his fans and supporters.

Shouldn't he be self-isolating for fourteen days?" "Isn't he putting his driver and his staff at risk of catching the virus?" "What is he doing?"

Anyway, many took the photos as confirmation that the president wasn't affected by the virus at all...

But now, his latest Twitter activity seems to tell a different story.

Today, the president tweeted an array of alarming messages regarding the up and coming elections...

All from the comfort of his hospital bed.

But many have been left a little alarmed by his rant...

And have even stressed that, as well as his covid medication, he needs psychiatric help.

Scroll on to see his bizarre, yet somewhat unsurprising rant.

For more on the Trumps, keep scrolling...